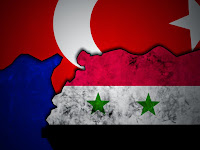 Reports are now filtering in that preparations for a direct military assault on Syria are being made by Turkey in concert with the Saudis and Qataris. These reports are suggesting that the military offensive will take place within the next few days. Some reports speculate that such action could take place further down the road in late June.

At this moment, Turkish forces are reportedly gathering at the nation’s southern border and Syria’s northern border in a fashion that can signify little except the posturing for military action.

While this article is in no way attempting to make predictions regarding possible military action, to provide dates, or even the hint that these possible attacks will definitively take place, the stage has clearly been set for some time for us to contemplate the possibility of such an attack.

Indeed, in the last few weeks, geopolitical alliances and talks have begun to coalesce so as to indicate that such an attack is not only possible but probable in the near future. After all, the US and NATO have attempted to gin up support for a direct assault on Syria since early on in the crisis when it became apparent that proxy armies of terrorists alone were not going to accomplish regime change.

The plans – at least from Turkey’s side of the fence – appear to be twofold. First, the plan to attack Syria has been part of the NATO agenda from the moment the death squads were routed by Assad’s forces and Turkey has always been a major playing in this regard.


Secondly, Prime Minister Recep Erdoğan’s own governing party has been suffering under a number of scandals, criticisms, and failures over the last several months and, as is the case in every country, a foreign war is more than helpful in diverting the attention of the local population away from domestic concerns. While certainly not the cause, plunging support from the Turkish public is certainly a stick used to prod Erdoğan into further action.

Emboldened by their illegal war in Yemen and their ability to massacre civilians abroad with little condemnation, the Saudis are apparently feeling more capable of acting against Syria directly and especially in concert with the Turks and Qataris. These attacks on Syria would undoubtedly take place – much like the Yemeni strikes – with US backing and support.

The plan was allegedly drawn up in Ankara, Turkey in collusion with the Qataris, who maintain interests in the region due to the Iranian pipeline that was scheduled to move through Syria.


The plan was to establish a solid foothold in the north of Syria. The Aleppo offensive has ground to a halt with the Syrian Army’s encirclement of the northern capital. Supply lines from Southern Turkey have been cut. Hence, the attack on Idlib which was accomplished using an heretofore unprecedented three-truck suicide barrage and (according to Syrian security sources), a breach in the defenses occasioned by a group of treasonous members of the National Defense Forces (PDC). This was followed by a takeover of most of the town of Jisr Al-Shughoor although no supply lines for government forces have yet been cut.

With Iran’s sanctions set to expire soon after June, 2015, a new and energized Teheran would be the last thing the apes of Ankara and Riyaadh would want. Flush with new wealth, Iran could more easily buttress the economy of Syria as the SAA continues to sweep away the syphilis-carrying rats who keep mouthing that nihilistic and meaningless “Allahu Akbar”.

The attack on Damascus would take place from the Qalamoon, Qunaytra and, possibly, from Der’ah in the south. The idea would be to overwhelm Syrian forces by utilizing Saudi Arabian air power. (Yawn). In the north, the Turks are expected to use their American-manufactured bombers to assist the Alqaeda rodents. Syrian missiles were supposed to be kept at bay by the Patriot Missile System batteries provided by certain NATO countries. The Turks have seriously miscalculated.

Other sources have suggested that a direct military campaign against Syria will begin a bit further off, at the end of June, citing cryptic statements by death squad fighters and supporters that the battle in Syria will be “hot” until June 30.

At this point, one can only speculate when the direct assault on Syria will take place. However, as we move into the weekend and as military posturing from Turkey, Saudi Arabia, and Qatar continues to become more threatening, it is important to watch the developments closely and to oppose any and all involvement of NATO, the Gulf Cooperation Council (GCC), or the US in Syrian affairs.

Recently from Brandon Turbeville:
Brandon Turbeville is an author out of Florence, South Carolina. He has a Bachelor's Degree from Francis Marion University and is the author of six books, Codex Alimentarius -- The End of Health Freedom, 7 Real Conspiracies, Five Sense Solutions and Dispatches From a Dissident, volume 1 and volume 2, and The Road to Damascus: The Anglo-American Assault on Syria. Turbeville has published over 500 articles dealing on a wide variety of subjects including health, economics, government corruption, and civil liberties. Brandon Turbeville's podcast Truth on The Tracks can be found every Monday night 9 pm EST at UCYTV.  He is available for radio and TV interviews. Please contact activistpost (at) gmail.com.
Posted by Admin at 12:37 PM