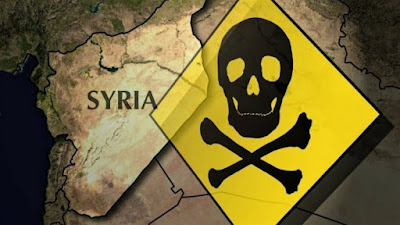 
Long after the initial alleged “chemical weapons attack” in Douma, Syria that resulted in one of the Trump administration’s more notorious examples of “show bombing,” more and more evidence continues to pile up that the attacks themselves never actually happened.

Years after the alternative media thoroughly debunked the claims made by the NATO alliance and its assorted propaganda arms masquerading as a mainstream press, a leaked report from the OPCW itself has revealed that the flimsy  “evidence” backing up the NATO claims may very well have been completely staged as well.

Experts were consulted to assess the appearance of the crater observed at Location 2, particularly the underside. The expert view was that it was more consistent with that expected as a result of blast/energetics (for example from a HE mortar or rocket artillery round) rather than a result of impact from the falling object. This was also borne out by the observation of deformed rebar splayed out at the underside of the crater, which was not explained by the apparent non-penetration and minimal damage of the cylinder. The likelihood of the crater having been created by a mortar/artillery round or similar, was also supported by the presence of more than one crater of very similar appearance in concrete slabs on top of nearby buildings, by an (unusually elevated, but possible) fragmentation pattern on upper walls, by the indications of concrete spalling under the crater, and (whist it was observed that a fire had been created in the corner of the room ) black scorching on the crater underside and ceiling.