It’s been a few months since mainstream media has presented its audience with a State Department super hero acting as a “humanitarian” in Syria. But, never to disappoint, Andrew Gold of Wired as well as a host of other writers (at the same time) have been extolling the virtues of three new tech heroes who have designed an app to allegedly protect Syrian civilians from becoming victims of airstrikes.

In the Wired article, “Saving Lives With Tech Amid Syria’s Endless Civil War,” Gold first narrates the story of Abu al-Nour, an alleged Syrian civilian who lives in Idlib province, the last major stronghold of America’s “moderate cannibals.” Gold does not tell us of any crimes by the “rebels” nor does he suggest al-Nour has any reason to fear them. Instead, the sole evil in the article is Assad and Putin and the airstrikes against terrorists represented by Gold as airstrikes on civilians.

The story takes us through an airstrike that al-Nour narrowly survives but only as a result of a new technology designed and created to help protect innocent people from becoming victims of Russian and Syrian (but not American or Israeli) airstrikes.

To be clear, regardless of which side you stand with, one can scarcely argue with helping innocent people escape being caught in the crossfire between the terrorists and the government. However, one need only read a little further to see the real purpose behind the new tech, a portion of which is illuminated by the individuals who created it. Indeed, there are scarcely any lines to read between in order to see that this new tech is devised not to help civilians but terrorists evade Russian and Syrian airstrikes. If it saves a civilian life in the process, that’s just good press. Ultimately, however, the Sentry system is nothing but another tool to assist intelligence assets and terrorists on the ground in Idlib.

Genocide For Profit - How The Gov't, Big Pharma, Psychiatry, And DSS Are Conspiring To Destroy Native American Culture From the first moments Europeans landed on the shores of North America, a war was waged against the indigenous people who lived there. That war took the form of deceptive agreements, settlements, outright violence, genocide, and, after defeat on the battlefield, an attempt to erase Native American culture and history from the minds of the victims. This war on Native Americans has never ended. Instead, it has only intensified with the lessons learned from the indoctrination and police state techniques used on the majority American population via television, law enforcement brutality, austerity/dependency, and of course medical tyranny, psychiatric fascism, and DSS/CPS.

In this new phase of the war, DSS/CPS play an important role. The separation and destruction of the family unit has continued apace with both the Native American and American populations but, in the case of Native Americans, it not only functions as a way to remove children from their families, but also a way to remove them from their culture. In this sense, DSS/CPS now functions as the old Indian Boarding Schools of the late 19th and early 20th Centuries that were devised to “civilize” and forcibly assimilate Native American people into the dominant culture.

The South Dakota Department of Social Services is working with psychiatrists and Big Pharma to engage in what can only be described as “genocide-for-profit.” It is using techniques it has learned on the American population of using “social services,” police, and the courts to separate children from their families, creating a population of people who have grown up without a stable family upbringing or who simply disappear only to turn up later in sex slavery rings or are left to some other horrible fate.

What is known about this situation is that, in South Dakota, Lakota children are being forcibly removed from their homes, put into foster care or psychiatric facilities and then over-prescribed psychiatric drugs that often rival some of the heaviest doses given to psychotic adults. If the US government and the FDA have their way, Americans may soon have more access to medications and prescription drugs without having to first see a doctor. This is undoubtedly a positive step in the right direction. Unfortunately, it’s not exactly what you might think.

For those who are unaware, in the United States, an allegedly free country, American citizens no longer have the option to decide what medications they believe they need or wish to take and simply purchase those medications from a pharmacy as in times past or as in many other countries today. Instead, they are forced to make an appointment with a doctor who is considered (and considers himself) the ultimate authority on what a patient can consume, regardless of the patient’s choices. Of course, the patient has to pay for that visit and he/she may not even be prescribed the proper medicine even after begging the doctor’s permission to access it. The patient then has to go to the pharmacy and prove that he has his hall pass (prescription) in order to be receive his medication.

Now, a new draft guideline from the FDA seems to be heading in the opposite direction but “seems” is the operative word here. The FDA is looking into to how it can “lower healthcare costs” and one of the options may be opening up certain medications to potential purchase without a doctor’s visit.

But before anyone gets the idea that America is inching its way back to freedom, you might want to slow down. Independent thought and individual choice is not on the menu just yet.

One idea is that patients could answer questions on a mobile-phone app to help determine whether or not they should be able to have access to a medication without needing a prescription. 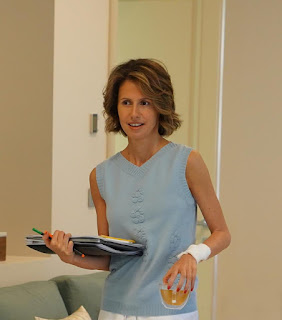 The media office of the Syrian Presidency announced on August 8 that First Lady of Syria, Mrs. Asmaa al-Assad had begun the initial stage of treatment for a malignant breast tumor. Thankfully, the tumor was discovered early.

“Strongly, confidently and faithfully, Mrs. Asmaa al-Assad started the first stage of treatment of a malignant tumor in the breast which was discovered in its early stage,” the office said on its Facebook page.

The announcement stated that Mrs. Assad is receiving treatment at one of the military facilities in Damascus city.

An outpouring of support for the First Lady has erupted across the internet both from Syrians in Syria and by her supporters abroad. One such statement of support came from Syrian analyst Afraa Dagher who wrote on her social media page:

Syrian first lady you are in our hearts. Syrians wish a quick recovery to the lady of Jasmine,  lady of the homeland, lady of peace and courage. Syria's first lady Mrs Asama Al-Assad is under treatment for a malignant breast tumor caught in its early stages and, according to Sana news and official presidency page , Mrs Asama is getting treatment in a Syrian military hospital. We should not worry for our brave lady. She is used to facing odds of defeat and difficulty.  She is a lady of Syria  and she faced the war on the country by steadfastness, wisdom, and courage.

She belongs to “this people who taught the world steadfastness, strength and how to face their difficulties...” In August of 2017, Bulgarian reporter Dilyana Gaytandzhieva published a report in mainstream outlet Trud in her home country exposing the paper trail documenting the US, NATO, and Gulf countries were shipping weapons to terrorists in Syria. Gaytandzhieva’s reporting was the result of her own travels to Syria where she saw these documents firsthand and her subsequent follow-up investigation after her return home.

That article, “350 Diplomatic Flights Carry Weapons For Terrorists,” is still available and I highly recommend reading it now before going any further in this article.

Now, nearly a year to the day after Gaytandzhieva’s article was released (for which she was summarily fired), journalist Robert Fisk has conducted a similar investigation and come to similar conclusions. In his article for The Independent, “A Bosnian signs off weapons he says are going to Saudi Arabia – but how did his signature turn up in Aleppo?” Fisk traces back the numbers found on shell casings, mortars, and other weapons used by terrorists to their manufacturers in Bosnia and the United States. He writes,

In the basement of a bombed-out al-Qaeda arms storage building in eastern Aleppo last year, I found a weapons log book from a mortar factory in Bosnia – with the handwritten name of one of their senior officials, Ifet Krnjic, on each page. It was dispatched from the Balkans with a cargo of 500 120mm mortars in January 2016. But now, in the forested heart of central Bosnia, I have found Mr Krnjic, who says his company sent the arms to Saudi Arabia.

Sitting on the lawn of his home south of the weapons-manufacturing town of Novi Travnik, he brings his finger down onto the first page of the log book which I showed him. “This is my signature! Yes, that’s me!” Krnjic exclaims loudly. “It’s a warranty for the 120mm mortar launcher – this is Nato standard. It [the shipment] went to Saudi Arabia. It was part of a supply of 500 mortars. I remember the Saudi shipment well. They [the Saudis] came to our factory to inspect the weapons at the beginning of 2016.”

This is astonishing. Not only does Krnjic, the 64-year old newly retired weapons control director of the BNT-TMiH factory at Novi Travnik, acknowledge his signature – but he says he recalls the visits of Saudi officials and military personnel to inspect the mortars before their shipment to Riyadh, and insists all such sales were strictly in accordance with the legal end-user certificates which his company obtained from all customers, stating that the weapons were to be used only by the armed forces of the nations which purchased them. As more and more information comes out regarding the Caravan of Evil (i.e. the evacuation of the White Helmets from Southwestern Syria to Jordan and Israel and then on to Europe), there is also more and more evidence backing up the suspicions by many writers in the alternative media including myself  regarding the nature of the specific White Helmets being evacuated. Namely, the idea that these individuals were more than just more al-Nusra Front propagandists, but valued intelligence assets.

Although refusing to open its borders, Israel (apparently the only country in the world that is allowed to maintain borders) has allowed members of the al-Nusra Front propaganda wing known as the White Helmets to access Israeli territory on their way to resettlement in Britain, Canada, and Germany according to Jordanian officials. Jordan was also part of the Caravan of Evil.

Estimates initially put the number of White Helmets being evacuated at 800 but those numbers were soon reduced to 500. Now, as Reuters reports, the number has been reduced further to 100 White Helmets and 300 relatives.

Fearing for his life, Daman Ayed registered to be evacuated from Syria along with hundreds of other members of the White Helmets rescue service, hoping for a new life in Canada.

But the 20-year-old was not among the several hundred people who were spirited out of the country last weekend over the Israeli-occupied Golan Heights and into Jordan. When the list of names approved for evacuation arrived, his was not on it.

“They told us at midnight that the names had come. We were surprised how many names had not been approved,” said Ayed. Only two of the people working at his rescue center were on the list.