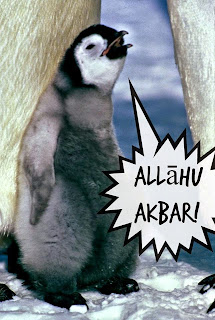 
After five years of intense fighting and destabilization raging across Syria, Western mainstream press has finally discovered the true cause of the so-called “civil war.” It turns out that all of the analysts in the alternative media suggesting that the situation in Syria was the result of a NATO destabilization campaign and foreign-backed invasion of terrorists in the form of al-Nusra, al-Qaeda, and ISIS were wrong. In fact, even those mainstream analysts who have suggested that the foreign invasion was actually a legitimate rebellion were apparently mistaken.

Thankfully, the mainstream press has discovered the true cause of the Syrian crisis – global warming.

No, this is not a joke. Mainstream outlets are actually suggesting that climate change is responsible, albeit indirectly, for the creation of ISIS and the scores of Western-backed terrorists flooding Syria as well as the now international military involvement in the war.

This is merely the latest silly narrative being promoted by the likes of Slate, Wired, The Telegraph,NBC, and The Guardian among many others.

Slate, by no means, is the sole purveyor of such abjectly stupid claims nor are the other media outlets listed above. Still, one need only read the Slate article to see how the “climate change is the real reason for the Syrian war” claim is being presented. Slate writes,

By now, it’s pretty clear that we’re starting to see visible manifestations of climate change beyond far-off melting ice sheets. One of the most terrifying implications is the increasingly real threat of wars sparked in part by global warming. New evidence says that Syria may be one of the first such conflicts.

We know the basic story in Syria by now: From 2006-2010, an unprecedented droughtforced the country from a groundwater-intensive breadbasket of the region to a net food importer. Farmers abandoned their homes—school enrollment in some areas plummeted 80 percent—and flooded Syria’s cities, which were already struggling to sustain an influx of more than 1 million refugees from the conflict in neighboring Iraq. The Syrian government largely ignored these warning signs, helping sow discontent that ultimately spawned violent protests. The link from drought to war was prominently featured in a Showtime documentary last year. A preventable drought-triggered humanitarian crisis sparked the 2011 civil war, and eventually, ISIS.


A new study published Monday in the Proceedings of the National Academies of Science provides the clearest evidence yet that human-induced global warming made that drought more likely. The study is the first to examine the drought-to-war narrative in quantitative detail in any country, ultimately linking it to climate change.

At this point, given the detailed nature of “climate science,” I will spare the reader a summation of the thoroughly debunked theory of Anthropogenic Man-Made Global Warming, at least as it relates to the non-existent and entirely invented theory of CO2 as a poisonous and planet killing gas. I will spare the reader historical data that proves the earth was much hotter in the past, thus indicatingthat we are well within the norm of climate ups and downs. I will also spare the reader the details regarding the fact that global warming has not taken place in the last eighteen years despite therigging of science equipment and faulty computer models to prove the opposite, thus calling into question whether the planet is actually still warming at all.

Unfortunately, Slate and its peers spared the readers the same information, leading hordes of hapless trendies to believe that CO2-Global Warming is actually a real issue and that it somehow is the guiding force behind terrorist cells, beheadings, and jihad. Leaving behind any and all knowledge of history of any form is generally important in order to be able to follow the logic provided by the recent mainstream press narrative about the Syrian war.

For instance, while US and UK media outlets attempt to suggest that global warming is responsible for the lagging Syrian agricultural sector and the fate of Syrian farmers, it conveniently fails to mention the US sanctions on Syria that helped plunge its economy into despair. While environmental factors undoubtedly play a role it is true that environmental factors always play a role in farming and agriculture in any country of the world at any time period. The false threat of CO2 does not change this fact.

Compounding the normal concerns and economic hardships of farmers with international sanctions, however, is not the result of too much CO2, it is the result of a concerted effort to destroy a sovereign and secular government for the purposes world hegemony.

Of course, these media outlets make no mention of the sanctions or the worldwide economic depression and place the blame firmly on the shoulders of Assad who allegedly “largely ignored these warning signs.”

As I have documented in my article, “The Roots of ISIS,” ISIS is nothing more than a name change in a long line of many name changes for the same terrorist organization (al Nusra, al-Qaeda, IEIL, FSA, etc.) that the US openly funded since as far back as the late 1970s and has continued to fund, direct, control, and use across the world ever since.

The suggestion that a drought, global warming, or any other weather event created ISIS and its cannibal army is atrociously stupid and an unfortunate example of the intellectual depths to which we have sunk as a nation. The fact that such a claim can be written with a straight face by numerous major media publications is more of a sad comment on the state of the American public than it is on the state of the corporate media. After all, corporate media has always been garbage but, in the past, it was somewhat necessary to maintain a professional and respectable air so as to maintain some level of credibility.

Unfortunately, the reality is that the result of these articles and the frivolous study it cites will be that, in discussion of the Syrian crisis with trendies, hipsters, and academics, one will now undoubtedly be forced to endure having to debunk global warming along with the assertion that global warming created ISIS. Well done mainstream media. Well done.

Of course, if the study cited by Slate and other mainstream media outlets are correct in their claim that global warming produces terrorist outfits like ISIS and al-Nusra, then we have much more to worry about than the Syrian crisis. Surely we will soon be overcome by polar bear suicide bombings and penguins shouting “Allahu Akbar!!”


The study’s authors are clear that global warming did not directly cause Syria’s civil war—it took a mix of underlying social vulnerability and an antagonistic government to do that. But it does provide compelling evidence that, when combined with the effects of increased population pressure and the poor policies of the Assad regime, the drought made a bad situation worse.To be fair, it is clear that the lack of availability of food, poor economic conditions and societal tensions can contribute and even cause mass social upheaval. This much is a fact.

However, to go to the lengths to which the mainstream press has gone, i.e. suggesting that global warming was the root cause of the Syrian crisis is absurd.

Its attempts to blame Syria and Syrians in general in regards to “the effects of increased population pressure” are nevertheless typical of Anglo-American population control and reduction initiatives as well as propaganda pieces that have been flooding Western culture in earnest since the early 1970s. Slate and its compatriots are therefore good Malthusians as much as they are good eugenicists because, apparently, the food issue never would have gotten out of hand if there been less Syrians to begin with. Fortunately for the mainstream press, its CIA advisers, and corporate owners, the problem of “too many Syrians” has been thoroughly dealt with.

But the question of the responsibility for the crisis lying with “an antagonistic government” is a bit more difficult to decipher. Antagonistic government? What does Slate mean? Is it referring to the Syrian government who has done nothing but protect minorities and its citizens from the likes of ISIS and the FSA and who was criticized by the majority of the Syrian people early on for not doing enough to destroy the so-called rebels?

Or is it referring to the United States who organized, directed, funded, trained, and facilitated the death squads for the last 5 years and even long before that?

Perhaps it is referring to Turkey, who has also funded, armed, and facilitated terrorists across its borders so that they can unleash hell on earth upon Syria?

Is Saudi Arabia a candidate for the title of “antagonistic government?” After all, the Saudis have been at the forefront of arming the jihadist fanatics dragging their knuckles across Syria today.

Or perhaps Slate meant Israel – the country that has bombed Syria numerous times in support of ISIS and has acted as a veritable Red Cross for injured jihadists?

No, clearly, Slate reserves its understanding of “antagonism” for the targets of NATO and US imperialism. In the eyes of the Western Press, Syria is antagonistic simply for having the audacity to exist outside the dictates of the Anglo-American purview.

Articles like those suggesting that Global Warming was the genesis of ISIS are nothing but propaganda pieces designed to draw the reader and the American public so far off track they begin to regurgitate utter nonsense where critical thinking once reigned supreme.

Iraqi Army Allegedly Downs A US Helicopter For Providing Weapons To ISIS: Report
More Alleged Moderates Join ISIS/Al-Qaeda - Bring TOW Missiles With Them
Is The Nemtsov Murder The First Shot Fired In The Russian Spring?Brandon Turbeville is an author out of Florence, South Carolina. He has a Bachelor's Degree from Francis Marion University and is the author of six books, Codex Alimentarius -- The End of Health Freedom, 7 Real Conspiracies, Five Sense Solutions and Dispatches From a Dissident, volume 1and volume 2, and The Road to Damascus: The Anglo-American Assault on Syria. Turbeville has published over 500 articles dealing on a wide variety of subjects including health, economics, government corruption, and civil liberties. Brandon Turbeville's podcast Truth on The Tracks can be found every Monday night 9 pm EST at UCYTV. He is available for radio and TV interviews. Please contact activistpost (at) gmail.com.
Posted by Admin at 7:07 AM