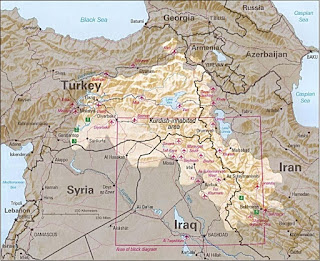 Over the last few months, Americans who pay attention to current events have been treated to a surprising barrage of praise coming from the mainstream media regarding the Kurdish fighters in Syria. The Kurds have been presented as true freedom fighters and an opposition that the US can justify supporting, at least at some level, against ISIS.

Much of this praise is well-deserved. Kurdish fighters have indeed fought bravely against ISIS, dealing blow after blow to the Western-backed terrorist group on a number of occasions. Indeed, the Kurds have fought so skillfully that the US was quick to steal credit for a high-profile operation that was actually conducted by Syrian and Iraqi Kurds – the rescue of trapped Yazidis on the top of Mt. Sinjar.

The resolve that Kurdish fighters showed in their fight against ISIS at Ayn al-Arab (aka Kobane) was extraordinary as was their understanding of the necessity for coordination and cooperation with the Syrian government with regards to issues containing mutual strategic self-interest for both parties.

The West, however, particularly NATO spear-headed by the United States has long had much a much different interest in the Kurdish fighters and their relationship to the region and the conflict currently raging there. Indeed, the Kurds have long acted as a force which the US has been able to harness to stir up destabilization in the Iraqi, Syrian, Turkish, and Iranian sphere. Such is the case now, as the US and NATO powers seek to use the Kurdish desire for an independent country – Kurdistan – as a destabilizing force against Syria, Iraq, and Iran and a galvanizing force for the Turks. Whether or not the Kurds will ever obtain such an independent state, however, remains to be seen.

Regardless, the US has been attempting to use the fighting force of the Kurds for their geopolitical aims – whatever those aims might be in relation to the creation or not of an independent Kurdistan.

Despite rushing in to claim the glory of the battle against ISIS and the rescue of trapped Yazidis on Mt. Sinjar, the Western press has been increasingly praising the fighters of Kurdish militias while ignoring, denying, or condemning the heroism of troops officially fighting for the Syrian government.

This is not to say that the Kurdish fighters do not deserve the praise they have received but, when one considers the fact that the individuals the Kurdish militias are fighting are actually controlled by NATO and the US, it becomes more obvious that there is an agenda to the recent upsurge in praise for Kurdish fighters.

For instance, the constant reference to the village of Ayn al-Arab as Kobane is an intentional statement since Kobane is the Kurdish name for the town while Ayn al-Arab is the Arabic/Syrian name. The rare coverage of the heroism of an individual actually fighting ISIS – such as the case with Hebun Sinya – is another sign that the Western media is attempting to make heroes of the Kurds while ignoring the heroism of others. Of course, this attention is well-deserved – Sinya was a stalwart fighter against ISIS and has earned the honor bestowed upon her. That being said, the Western media (la Perfide Angleterre) and the governments it speaks for always has an ulterior motive for whatever stories it reports. Thus, there is clearly another agenda to the positive presentation of the Kurdish fighters against ISIS.

While the wheels of the propaganda machine is turning on the screens of Westerners in the US and Europe, the plan to carve out a Kurdistan is taking a much more violent form in Syria and Iraq. The ability to remove all forces within the borders of what would be called Kurdistan (except for the Kurdish forces) has been the result of constant U.S. bombing and death squad herding around towns like Ayn al-Arab (Kobane),Tal Abyad, and others where the Kurds are able to outline their territory by virtue of military prowess.

After all, the US bombing has done nothing but strengthen ISIS at every other location in Syria and Iraq, while even bombing Syrian infrastructure and Iraqi military forces directly, and “accidentally” airdropping of support to ISIS. In the Kurdish areas, however, such bombing seems to be functioning as a primitive and violent method of border shaping that will outline the Kurdish territory from the Syrian and Iraqi territories. Increasing ISIS forces in Ayn al-Arab (Kobane) significantly hampers the ability of the Syrian Army to respond to defeat those forces in these specific areas, thus cutting off Ayn al-Arab from the Syrian Army and leaving the Kurdish areas to the devices of the Kurds as the ISIS forces are beaten back from inside the borders of the developing Kurdistan.

Leaving the question of the legitimacy of a Kurdistan aside for a while and acknowledging the heroism of the Kurds in their fight against ISIS, Nusra, and other terrorist forces, it should be noted that the Kurds have found some very unsavory allies in the process. Most notably, those unsavory allies turn out to be the United States and the Free Syrian Army (proxy terrorists of the US and NATO).

For instance, the United States has been tacitly supporting the Kurdish fighters in Iraq for some time under the pretext of assisting them in their fight against ISIS, despite the fact that the United States has armed, trained, funded, facilitated, and directed ISIS from the beginning. The United States has allegedly stopped short of directly arming the Kurds but it has maintained very close ties with them. Some would even argue that, with the exception of the ISIS fighters themselves – the Kurds have more friendly relations with the U.S. than the Iraqi government.

The US government has been attempting to pass legislation to directly arm the Kurdish and Sunni forces in Iraq for some time, recently passing part of that legislation in the form of the National Defense Authorization Act of 2016 (although differences in the House and Senate version are currently being worked out).

The arming of the Kurds directly in Iraq, along with the Sunni forces, would thus create the perception of fully separate and independent principalities, free from the control of the Iraqi central government, leading to the breakup of the country as a whole into three separate entities – a Kurdish segment, Sunni segment, and Shiite segment. Such a plan has long been in the works for Iraq and, if the US continues its support of Kurds in Syria, the situation is ripe for the appearance of a Kurdistan entity across the borders of Iraq and Syria. Indeed, much like the plan to break up Iraq into three separate parts in Iraq, a similar plan was devised for Syria in the absence of total destruction in the same vein as Libya.

While the question of accepting arms may easily be explained by the “gold is where you find it” motive, the fact that the YPG is now working directly with the Free Syrian Army (FSA) is further evidence of collusion between NATO/US and the YPG. While presented as moderate by the mainstream western press, the FSA is nothing more than al-Qaeda, ISIS, and Nusra. Indeed, there is no such thing as a moderate rebel in Syria and there never has been. The FSA is documented to have committed massive atrocities and the groups – directed, armed, controlled and funded by the US – are intent upon implementing Sharia law on the subjugated populations. As I and other researchers have documented, the FSA is nothing more than a wing of al-Qaeda/ISIS and has even publicly stated that it was working with the terrorist organizations (also funded, trained, armed, and directed by the West) in the past.

The fact that the YPG would be willing to cooperate with the FSA is telling but the fact that the FSA would be willing to cooperate with the YPG is even more telling. After all, the Iraqi Kurds have long been connected to US intelligence and military operations in the past. With an increase of signs of cooperation between the YPG and their Iraqi counterparts, one can only wonder if the events transpiring on the ground in relation to the Kurds in Syria, Iraq, and Turkey are part of an overarching US plan to finally carve out a pound of geographic flesh out of Iraq and Syria.

Unfortunately for the Kurds, the history of their community and the US has been one of short-term usefulness and treachery. Seldom have the Kurds benefited from supporting American actions or working in the service of US geopolitical agendas, whether wittingly or unwittingly. In almost every single circumstance, the Kurds have provided yeomen’s service in the name of destabilization and the strategy of tension but have been left holding the bag in the end. That bag almost always contains horrific slaughter and subsequent oppression of the Kurdish people.

Despite the possibility of the development of an autonomous or even independent Kurdish entity in Iraq and Syria, Turkey is most certainly not going to allow the formation of a Kurdistan to come from its own territory. The Turks have been fighting for years against such a proposal even at the cost of some of their international reputation, billions of dollars, and massive amounts of destruction and loss of life.

This, then, is the gift of Erdogan and his backers who have cooperated with the West, the US, and NATO in their attempts to destroy Assad. The destabilization of the Kurdish regions will, without a doubt, begin to spill over into Turkey, reviving Kurdish dreams of a Kurdistan, carved from Syria, Iraq, Iran, and Turkey. Erdogan’s treacherous and immoral cooperation with the US has also proved foolish as Turkey will itself be dragged into another quagmire and destructive war to prevent Kurdistan from becoming a reality.

All this being said, considering the history of the Kurds and Western machinations, there is no guarantee a Kurdistan will ever actually take shape. With a Kurdistan, the Brzezinski method of micro-states and mini-states will become realized. In other words, the construction of a weak, impotent state based upon ethnicity, religion, and other identity politics but without the ability to resist the will of larger nations, coalitions, and banking/industrial corporations.

Without a Kurdistan, the strategy of tension and destabilization will continue to exist as a ready-made fallback plan with which to weaken the region and provide for yet another avenue to sink the countries surrounding the faux Kurdistan into regional conflict and war.

While the final goal of the Anglo-American empire regarding the creation of a Kurdistan still remains to be seen, the question itself is undoubtedly being used for geopolitical reasons today. It is also certain to result in lower living standards, greater oppression, and less freedom for all involved.

Recently from Brandon Turbeville:
Brandon Turbeville is an author out of Florence, South Carolina. He has a Bachelor's Degree from Francis Marion University and is the author of six books, Codex Alimentarius -- The End of Health Freedom, 7 Real Conspiracies, Five Sense Solutions and Dispatches From a Dissident, volume 1 and volume 2, and The Road to Damascus: The Anglo-American Assault on Syria. Turbeville has published over 500 articles dealing on a wide variety of subjects including health, economics, government corruption, and civil liberties. Brandon Turbeville's podcast Truth on The Tracks can be found every Monday night 9 pm EST at UCYTV.  He is available for radio and TV interviews. Please contact activistpost (at) gmail.com.
Posted by Admin at 8:23 AM