Is Ukraine The Next In Line For Default?

As Greece concludes its vote to reject IMF austerity measures and impossible “debt repayment mechanisms” and as the Puerto Rican debt cauldron bubbles off the shores of the United States, there is yet another country whose debts to private bankers, the IMF, and other “creditors” is about to come due – Ukraine.

Around the end of July, approximately $15.3 billion dollars of bonds will be due to be paid to a wide variety of creditors – government, IMF, and private holders. On July 26, however, Ukraine will be unable to pay the money it owes to those creditors.

Interestingly enough, when the Greek default hung in the air along with the possibility of the continued rejection of IMF austerity measures, compounded with the likelihood that the Greeks would begin to pursue a new policy of independence, sovereignty, and dirigism, the result was media and financier panic. That panic is not being played out over the Western airwaves when it comes to the question of Ukraine, however.

Indeed, another curious aspect to the looming Ukrainian default is the apparent haggling and scrambling on the part of the IMF to ensure that the country continues to implement austerity, pay its private creditors (except Russia), and pay the IMF while staying afloat, at least on paper. After all, when the Greeks announced (as the IMF later admitted in its own report) that the debt it owed was unpayable and unserviceable, the reactions from the IMF and the Eurogarchs were quite different – either make all the payments and implement all the austerity measures or face the wrath of the world financial elite.


The reason for the attempt at continued flotation of the Ukrainian state (not at the cost of austerity and privatization of course) might be because Ukraine is a necessary component to the Western strategy of aggression against Russia and the destruction of Novorossiya, a goal unlikely to be accomplished if the state collapses in on itself entirely.

However, the IMF and Western financier oligarchs have long drooled over the idea of privatizing Ukrainian factories, farmland, and essential services, a process that was already set in motion but which will be certainly accelerated if the Ukrainian government defaults on its loans. So the desire to keep the country afloat for destabilization and war purposes will likely be balanced with the desire to gut and privatize it.

Interestingly enough, most of these loans are actually due to private creditors from the United States who have refused to take any haircut on the bonds they purchased before the Western-backed coup took place in Ukraine.

Still, the IMF Managing Director and her Deputy have since announced that it plans to continue its scheduled $17.5 billion support program so long as the country continues to implement the prescribed austerity policies and “restructuring” requirements.

Regardless, Ukraine is in serious trouble.


Yet the European Union, which has committed $222 billion to bailing out Greece, has offered Ukraine $5.5 billion. The United States, which provided $20 billion to save Mexico from default and $18 billion for reconstruction in Iraq, has approved $3 billion in loan guarantees for Ukraine. 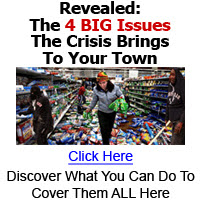 The paltry sums have placed the Kiev government at the mercy of foreign creditors holding $19 billion of its private debt — including the Russian government, which holds a $3 billion eurobond. Outside of Moscow, the biggest bondholders are U.S. hedge funds, including bottom-feeder Franklin Templeton. To meet the IMF’s plan, the government must extract $15 billion in relief from them over four years. But Franklin Templeton and its partners have refused to accept a reduction in principal, despite prodding from the IMF and the U.S. Treasury.

That leaves Ukraine facing the possibility of default as soon as the end of this month, and no later than September, when a $500 million bond falls due. Anders Aslund, an expert on the Ukrainian economy at the Atlantic Council, thinks Ukraine needs $10 billion in additional financing to survive the next two years. At best, it may get half of that.

Thus, it looks like Europe and the world might now witness a Ukraine default only weeks after the Greek one. How this situation will be handled is anyone’s guess but we have to wonder whether or not the double team effort of the IMF and the US creditors is merely an attempt to impose emergency measure upon Ukraine and its governing structure so that it will more easily accept the crushing austerity measures and privatization schemes the IMF wishes to impose. Of course, there is also the possibility that the necessary lifeline of temporary credit will be extended so as to continue to use Ukraine as a spearhead against Russia.

What is known, however, is that neither the IMF nor international financiers tend to miss out on an opportunity to rape a nation over debts manufactured from thin air, especially when such an opportunity increases the power of those institutions over the nation and its people.

Recently from Brandon Turbeville:
Brandon Turbeville is an author out of Florence, South Carolina. He has a Bachelor's Degree from Francis Marion University and is the author of six books, Codex Alimentarius -- The End of Health Freedom, 7 Real Conspiracies, Five Sense Solutions and Dispatches From a Dissident, volume 1 and volume 2, and The Road to Damascus: The Anglo-American Assault on Syria. Turbeville has published over 500 articles dealing on a wide variety of subjects including health, economics, government corruption, and civil liberties. Brandon Turbeville's podcast Truth on The Tracks can be found every Monday night 9 pm EST at UCYTV.  He is available for radio and TV interviews. Please contact activistpost (at) gmail.com.
Posted by Admin at 5:12 PM