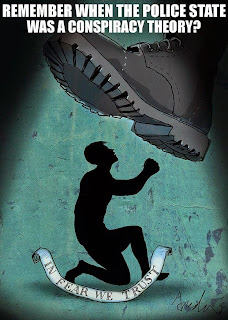 On Thursday, December 4, UCY radio host personality “Jules” began the show as she always does – by cracking a few jokes as a way of introduction and giving a rundown of some of the day's news items with commentary.

But when she arrived at the topic of the Eric Garner killing, particularly the fact that the cop who murdered Garner will not be indicted and that discredited Attorney General Eric Holder will be leading an “independent” investigation into the case, Jules became heated.

In fact, to describe her broadcast for the next 8 minutes or so as “heated” would be a bit of an understatement. The host of Before the First Cup launched into a profanity-laced tirade against Holder, racism, and police brutality, the likes of which is seldom heard on the radio.

Her rant started off simple enough. She began by discussing Eric Holder’s history of corruption and how she believes he cannot be trusted to head up a truly fair investigation into the murder of Eric Garner.


She began by saying, “So what makes me so sick about all this is, good ol’ criminal Attorney General Eric Holder, the head of the law of the land is the most corrupt of them all!! Fast and Furious mean anything to you? Gun running! This just angers me beyond belief.”

In a tone of obvious disdain and mockery Jules continued to report the news of the impending investigation by saying, “The U.S. Justice Department announced that it is opening a Federal rights investigation which, what kills me is that this is all gonna be a big freaking joke. It’s opening an investigation, a federal civil rights investigation into the death of Eric Garner who was killed by a choke hold at the hands of police. U.S. Attorney (Criminal!!), U.S. Attorney General criminal Eric Holder made the announcement Wednesday evening in the wake of a Grand Jury decision not to indict the police officer responsible for placing Garner in a choke hold. The investigation will consider whether or not police violated Garner’s civil rights.’”

At this point the host could no longer contain herself. “Police fucking killed him!!!!,” she said. “And it was ruled a homicide!! How is that not a violation of fucking civil rights?!?!? I just can’t even believe this!! How is he not being charged with murder? How about, alright, let’s back up the truck. How about we cut a deal. Involuntary manslaughter. You didn’t mean to kill him but you put him in a choke hold that was not procedure for NYPD. That right there! He should be held fully responsible.

She continued, “Some bullshit taxpayer financed inquiry into whether or not this guy’s civil rights were violated. There is not a question!! He was murdered!! For selling fucking cigarettes!!! On a New York City street! That is unacceptable! Absolutely unacceptable!”

Returning to the article, she read and commented further. “‘Prosecutors will conduct an independent’ Oh! I like the way they word this!,” she interjected,”

‘Independent thorough and fair investigation Holder said including ‘a complete review’ of material gathered during the local investigation.’” I can’t trust criminal Holder as far as I can chuck him!! And he and his agency are heading up this investigation that’s already been tainted and bullshitted all over the place?!? I mean, people, this is off the hook now!

The host then turned her sights on the racism and claims of racism surrounding the case as well as what she suggests is the actual promotion of some type of race war in America.

Jules is the host of Before the First Cup, a Mon-Fri morning show broadcast on UCY.
Posted by Admin at 9:30 AM