While America Daydreams, Warmongers Ready For Assault On Syria 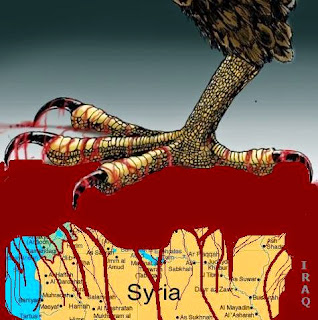 
When the Anglo-American powers are intent on the destruction of a target country – whether it is Iraq, Libya, Syria, or some other unfortunate nation that finds itself in the crosshairs of NATO – there is very little that will stand in the way of their goals. Such is the case with the possible “No-Fly Zone” being discussed in the public view both by Washington and Ankara.

Coming on the heels of what appeared to be a stall in the plans to implement a “No-Fly Zone” in Syria by the United States, a recent shake-up in the U.S. government resulting in the firing of Secretary of Defense Chuck Hagel (one of the few officials who expressed at least some level of reservation to military intervention against Assad’s forces), NATO is back at it again.

That the United States and Turkey have suddenly reached an agreement as to the use of Turkey’s air base and the imposition of a ‘No-Fly Zone’ in Syria should come as no surprise. A “No-Fly Zone” or “Buffer Zone” has been the desire of NATO since the Western-initiated crisis began in 2010 as an effort to provide a deeper staging ground for terrorists and death squads operating inside Syria and in order to more easily overcome Assad’s forces. In addition, the implementation of the “No-Fly Zone” would essentially be a declaration of war against Assad’s military which would result in the bombing of Syrian Air Bases and other military installations. This military intervention would also greatly weaken the Syrian military and provide a much needed second wind for Western-backed terrorists both militarily and in terms of morale.

In other words, the implementation of a “No-Fly Zone” would be nothing more than the creation of Libya 2.0.


Yet the creation of a “No-Fly Zone” is exactly what the United States and Turkey are preparing. As Adam Entous of the Wall Street Journal wrote,

U.S. and Turkish officials have narrowed their differences over a joint military mission in Syria that would give the U.S. and its coalition partners permission to use Turkish air bases to launch strike operations against Islamic State targets across northern Syria, according to officials in both countries.

As part of the deal, U.S. and Turkish officials are discussing the creation of a protected zone along a portion of the Syrian border that would be off-limits to Assad regime aircraft and would provide sanctuary to Western-backed opposition forces and refugees.

U.S. and coalition aircraft would use Incirlik and other Turkish air bases to patrol the zone, ensuring that rebels crossing the border from Turkey don’t come under attack there, officials said.

Turkey had proposed a far more extensive no-fly zone across one-third of northern Syria, according to officials. That idea was, however, a nonstarter for the Obama administration, which told Ankara that something so invasive would constitute an act of war against the Assad regime.

Notably, only a few months ago when Turkey and the United States were discussing the possibility of the establishment of a “No-Fly Zone” over Syria, the term used was “Safe Zone.” In December, the new term for the “No-Fly Zone” is being referred to as an “Air-Exclusion Zone.” It seems these synonyms and semantic name changes will never end.


The new proposal would be called an “air-exclusion zone,” a buffer area inside Syria along the Turkish border that would be manned by Turkish troops and protected by U.S. air power, according to three senior U.S. officials who have been briefed on the discussions. The goal would be to give some Syria rebels and civilians protection from both Islamic State and the regime of Syrian President Bashar al-Assad and increase the flow of humanitarian aid to Syria through the zone. The idea was last floated in 2012 by the French government, and then-Secretary of State Hillary Clinton was reported to support it at that time.

Of course, the “air-exclusion zone” has nothing to do with providing humanitarian aid. Nor does it have to do with protecting civilians from the Islamic State or Bashar al-Assad, the latter of which is not targeting civilians to begin with. Quite simply, with the establishment of this “buffer zone,” a new staging ground will be opened that allows terrorists such as ISIS and other related terrorist organizations the ability to conduct attacks even deeper inside Syria.

Working together with its NATO/GCC allies as well as the ever-present provocateur Israel, the United States intends to create a buffer zone in the North and East of Syria while continuing to facilitate the opening of a "third front" on the Syrian border with Israel.


At the end of the day, it is important to remember that the U.S. airstrikes and its attempts to create a “buffer zone” inside Syria are nothing more than a farce. The death squads running amok in Syria are themselves entirely creatures of NATO and they remain under NATO’s command. The true enemy of ISIS, Khorasan, and the cannibals of the Levant has always been and continues to be Bashar al-Assad.

Notably, the plan is being coordinated by Obama’s ISIS Czar, disgraced General John Allen, who was allegedly fired for “thousands of ‘inappropriate communications’” with Florida socialite Jill Kelley, who was also tied to the Petraeus affair.

Some reputable researchers have suggested that Allen’s original ousting had more to do with infighting amongst members of the American ruling elite involving rabidly pro-war factions (i.e. Petraeus, Ham, Allen, etc.) versus more restrained (but by no means moral) members of the elite (Obama, Hagel, Dempsey etc.) than with allegations of impropriety and inappropriate communications.

Regardless, all of the relevant members of the ruling elite are now completely on board with the plan to launch a military assault on Syria if it were ever in question at all. Even the speed in which the assault should come seems no longer in question. Allen, formerly disgraced and removed from his position is back as ISIS Czar and, thus, so is the Petraeus connection. Hagel is gone. Dempsey has been “converted” from whatever hesitation he may have expressed early on. The boys are back in town and they are ready for war.

Make no mistake, while the plans to implement a no-fly zone may have lost some steam temporarily, NATO has not given up on its goal of turning Syria into Libya on much the same roadmap. Any palatable excuse will do and, in the absence of a proper excuse, the apathy of the general public will suffice.

Unfortunately, American apathy is at record highs while NATO and Western media are hard at work providing a number of excuses for the perceived necessity of American military invasion – from the terrorists that NATO itself created, directed, funded, armed, and control to the ever present ludicrous and bizarre fantasies that Assad is the next Hitler, replete with dubious and deceitful connections to actual members of Hitler’s military officers in his cabinet.

The NATO war machine is beating its drums even louder.

For those of us who wish to avoid another military confrontation and an even greater destruction of the lives and livelihoods of millions of people in Syria, time is growing short.

Brandon Turbeville is an author out of Florence, South Carolina. He has a Bachelor's Degree from Francis Marion University and is the author of six books, Codex Alimentarius -- The End of Health Freedom, 7 Real Conspiracies, Five Sense Solutions and Dispatches From a Dissident, volume 1and volume 2, and The Road to Damascus: The Anglo-American Assault on Syria. Turbeville has published over 300 articles dealing on a wide variety of subjects including health, economics, government corruption, and civil liberties. Brandon Turbeville's podcast Truth on The Tracks can be found every Monday night 9 pm EST at UCYTV. He is available for radio and TV interviews. Please contact activistpost (at) gmail.com.
Posted by Admin at 7:18 AM