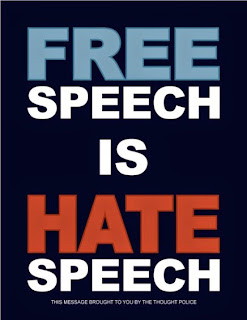 
If anyone was wondering whether or not The Southern Poverty Law Center was still active in targeting American citizens for their personal beliefs or attempting to dismantle their First Amendment rights, the SPLC has reasserted itself yet again – this time targeting “hate music” and “white power rock bands” on online music and retail services.

An “investigation” was recently undertaken by the SPLC in order to determine whether or not the music of bands that the SPLC deems offensive or racist – except for explicitly racist rap music – were being sold on online services like iTunes, Amazon, or Spotify. As one might expect, this “investigation” revealed a number of bands and songs that the SPLC believes Americans do not have a right to hear, access, or produce.

This investigation and the subsequent report has resulted in the removal of a number of bands and songs from iTunes. The SPLC has complained that Amazon and Spotify, however, are responding too slowly to their command.

On the heels of an SPLC investigation that found songs by dozens of white power rock bands being sold on iTunes, Apple has begun removing hate music from its service, though other sites offering hate music, such as Amazon, have been slow to act.

“Apple is doing the right thing by preventing iTunes from being used as a recruitment tool for white supremacists,” said Heidi Beirich, director of the SPLC’s Intelligence Project. “Amazon and other online retailers that continue to sell this music need to realize that they are providing a powerful platform for extremists to reach young people with messages that advocate hate and violence against African Americans, Jews and others.”

The SPLC apparently was not concerned with music that might “reach young people with messages that advocate hate and violence” against Caucasians since the focus was on “white power bands” from the outset.

While some of the lyrics cited by the SPLC were undoubtedly racist and deplorable, what is also deplorable is that the SPLC, which has set itself up as the arbiter of all that is race and justice related, is allowed to erase an artist’s freedom of expression and one’s right to hear and see it.

The First Amendment exists in order to protect unpopular speech, no matter how strongly we may disagree with the statements being made. While, admittedly, the songs were removed by the decision of a private company after being lobbied by the SPLC, it is also true that the SPLC has made a career out of promoting acts and expressions of hate only to be seen as the opponent of these very acts and the savior of the perceived targets.

The SPLC is also notorious for deeming Libertarians, Constitutionalists, Patriots, and militias as “hate groups” as well as for its nonstop paranoia and fearmongering over what they label “conspiracy theorists” and “anti government extremists.”

Of course, the individuals lumped into at least two of these categories are generally obsessed with upholding and respecting the U.S. Constitution, the founding document of the United States government. But that has never mattered to the SPLC. According the SPLC, being pro-Constitution makes you anti-Government.

The SPLC is also well known for its tight working relationship with the FBI as well as with many law enforcement agencies across the country.

It is also well known that FBI controls most white supremacist groups operating inside the United States today. With the close relationship between the SPLC and the FBI, particularly in the area of “hate groups,” it is justifiable to question the exact role that the SPLC itself plays in hate crimes and hate groups in general. Thus, its fascination with “hate music” on the Internet rings somewhat hollow on ears that are informed as to the true nature of the organization.

The National Alliance, like most white supremacist groups, is controlled by the FBI.
In 2007, its supposed leader, Green Beret David Kellerman, said he worked for the FBI. During a trial on weapons charges, Kellerman “said he went to work for the FBI with orders to infiltrate the National Alliance, a neo-Nazi group, in 2000 and relay intelligence. The group’s founder wrote a book that is widely believed to have inspired the 1995 Oklahoma City bombing,” the Miami Herald reported.

Is it possible the SPLC is somehow connected to the latest shooting? In 2005, court papers revealed that the supposed anti-racist organization ran an “informant” (informant and agent provocateur are often interchangeable) at Elohim City prior to the bombing of the Murrah Federal Building in 1995.

“The potentially explosive contents of the teletype, among other things, exposed for the first time an informant operation being conducted by nationally known civil rights lawyer Morris Dees through his organization the Southern Poverty Law Center (SPLC),” J. D. Cash wrote for the McCurtain Daily Gazette in October of 2005.

In some detail the FBI acknowledged the SPLC was engaged in an undercover role where it monitored subjects for the FBI believed to be linked to executed bomber Timothy McVeigh, the white supremacist compound at Elohim City and the mysterious German national Andreas Carl Strassmeir.

Strassmeir was a German intelligence officer and the leader of the Aryan Republican Army at Elohim City, Robert Millar, worked closely with the FBI. “Founder Millar repeatedly shared information with law enforcement officials. During a June 31, 1997 court proceeding, FBI Senior Agent Peter Rickel testified Millar was in regular contact with the agency in the years before the bombing,” writes Jim Redden in his book,Snitch Culture.

As we noted in the case of the 1st SS Kavallerie Brigade Motorcycle Division bust in July, the FBI controls the virtually all white supremacist groups.

It came out during the trail of reputed racist Hal Turner that he was a “National Security Intelligence” asset working for the FBI’s Joint Terrorism Task Force. His code name was “Valhalla” and “he received thousands of dollars from the FBI to report on such groups as the Aryan Nations and the white supremacist National Alliance, and even a member of the Blue Eyed Devils skinhead punk band,” according to The Record.

The FBI has run racist and white supremacist groups since the 1960s. Under COINTELPRO, the FBI “subsidized, armed, directed and protected the Ku Klux Klan and other right-wing groups,” Brian Glick writes. Racist groups were used to create a strategy of tension by attacking groups on the so-called left, including anti-war, Chicano and Puerto Rican activists and nationalists.


Despite the hype by “Conservative” media outlets earlier in the year, the SPLC continues to work closely with the FBI.

In addition the SPLC admits, on its own website, that it works closely with local law enforcement agencies. It states,


The Southern Poverty Law Center regularly conducts in-person training sessions for local, state and federal law enforcement officers by request. We focus on the history, background, leaders and activities of far-right extremists in the United States.

These free training sessions last from two to six hours and are tailored to fit the requesting agency's requirements – from small police departments needing a basic introduction to the hate movement to intelligence groups needing a more detailed, specialized briefing.

SPLC trainers have almost 50 years of combined experience. They are California POST-certified and Federal Law Enforcement Training Center certified. A lesson plan can be provided to the law enforcement agency to determine if a session qualifies for POST certification or continuing education credits in that state.


The incredibly biased, ignorant, and terrified police forces that look at every American citizen as an insurgent in occupied territory is greatly contributed to by the “training” provided to their local forces by the SPLC.

Thus, it is important to remember the treacherous nature of the SPLC and their agenda to further divide the United States via relentless race-baiting and their constant attacks on freedom of speech, thought, and expression. It is also important to remember the SPLC’s contribution to the law enforcement community and the American police state by virtue of its nonsensical “training” and fearmongering of police.

Brandon Turbeville is an author out of Florence, South Carolina. He has a Bachelor's Degree from Francis Marion University and is the author of six books, Codex Alimentarius -- The End of Health Freedom, 7 Real Conspiracies, Five Sense Solutions and Dispatches From a Dissident, volume 1and volume 2, and The Road to Damascus: The Anglo-American Assault on Syria. Turbeville has published over 300 articles dealing on a wide variety of subjects including health, economics, government corruption, and civil liberties. Brandon Turbeville's podcast Truth on The Tracks can be found every Monday night 9 pm EST at UCYTV. He is available for radio and TV interviews. Please contact activistpost (at) gmail.com.
Posted by Admin at 10:13 AM