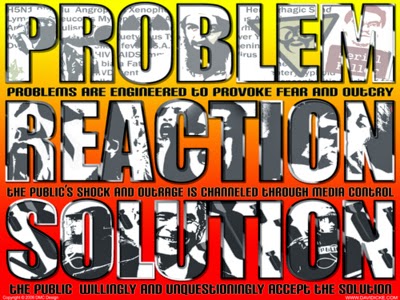 
Right on schedule, following a high profile terrorist attack, the government of Australia is now “investigating new security laws” and other methods that can be used to gut the civil liberties, privacy, and general way of life of Australian citizens. Only a day after the Sydney Siege, Australian “lawmakers,” intelligence agencies, legal branches, and other government officials sprung into action in order to discuss the possibility of passing yet another law allowing the collection and housing of telecommunication and Internet data of Australian citizens.

On December 16, the Australian Parliament was hearing testimony by Federal Police Commissioner Andrew Colvin who “warned of ‘grave implications’ for terrorism investigations if telecommunications companies are not forced to keep phone and internet data.”

"I could not understate enough that it would have grave implications for law enforcement's ability in this country to investigate, deter and disrupt potential terrorist acts," Colvin said. He also claimed that, as new Telecom Companies entered the market, there was less data being collected and what data was being collected is being held for shorter periods.

The inquiry comes as part of the Joint Intelligence and Security Committee’s “debate” over a third round of oppressive laws regarding phone and computer data collection and retention.

Of course, since the inquiries conveniently have come on the heels of the Sydney Siege, lawmakers are now asking whether or not these measures could serve to prevent “lone wolf” attacks as well as coordinated acts of terrorism. A separate inquiry is being requested to determine if these laws could prevent events like the Sydney Siege which appears to be something vastly different from a lone wolf attack and instead more like a state-sponsored event.


The committee is also “set to examine the next package of proposed counterterrorism laws” in the very near future.

Some major players on the committee were anything but critics of the greater implementation of a police and surveillance state such as “Australia’s Top Spy,” ASIO Director General Duncan Lewis, the Australian Crime Commission, and the Attorney General’s office.


After the passage of the first and second round of surveillance and anti-terrorism bills in Australia, the occurrence of the Sydney Siege will conveniently serve to eliminate much of the opposition to that legislation already passed as well as those bills currently being debated.

The first round of anti-terrorism legislation passed in Australia this year, the National Security Legislation Amendment (Bill No.1) 2014, passed with bi-partisan support. As Ben Grubb of the Sydney Morning Herald wrote in September 2014, the NSLA gave the Australian government even more extraordinary powers. He stated,

Australian spies will soon have the power to monitor the entire Australian internet with just one warrant, and journalists and whistleblowers will face up to 10 years' jail for disclosing classified information.

The government's first tranche of tougher anti-terrorism bills, which will beef up the powers of the domestic spy agency ASIO, passed the Senate by 44 votes to 12 on Thursday night with bipartisan support from Labor.

Anyone - including journalists, whistleblowers and bloggers - who "recklessly" discloses "information ... [that] relates to a special intelligence operation" faces up to 10 years' jail.
Any operation can be declared "special" by an authorised ASIO officer.

This also gives ASIO immunity for criminal and civil liability in certain circumstances.
Many, including lawyers and academics, have said they fear the agency will abuse this power.

Those who identify ASIO agents could also face a decade in prison under the new bill, a tenfold increase on the existing maximum penalty.

The new bill also allows ASIO to seek just one warrant to access a limitless number of computers on a computer network when attempting to monitor a target, whichlawyers, rights groups, academics and Australian media organisations have condemned.

They said this would effectively allow the entire internet to be monitored, as it is a "network of networks" and the bill does not specifically define what a computer network is.

ASIO will also be able to copy, delete, or modify the data held on any of the computers it has a warrant to monitor.


That bill passed as did the second bill (aka the Foreign Fighters Bill) which was submitted shortly after the passage of the first. The second bill, according to the bill’s own language, allowed for,

Now, as the third round of anti-terrorism laws are being “debated,” (i.e. promoted), the Sydney Siege conveniently takes place putting the event firmly in the category as those across the world that preceded such as the OKC bombing, 9/11, the Underwear Bomber, 7/7, and other “terrorist attacks” that were conveniently timed to take place either shortly before bills designed to shred civil liberties were being discussed or were to serve as the stated cause of their writing. In truth, in virtually every case, such legislation was already written long beforehand.

Of course, the new surveillance laws would have done absolutely nothing to stop Monis’ rampage. After all, Monis was on the radar of the police long before he engaged in the Sydney Siege. As David Marr writes for The Guardian,

This will be used to justify so much: controversial security laws the Abbott government has already passed, the metadata retention law waiting in the wings and heaven knows what other laws may now be dreamed up in the aftermath of the shocking deaths in the Lindt cafe.

Dealing with Man Haron Monis never needed fancy new security laws. He has been on the radar of police – and probably Asio – since at least October 2009 when he turned up at a police station in Sydney’s western suburbs trying to report a bogus terrorist attack. He was charged, instead, with writing menacing letters to the families of soldiers killed in Afghanistan.

From that point until yesterday’s terrible events, police and Asio had all the authority they needed to keep track of a man who revealed himself over the years to be really nasty and really crazy.

Old laws allowed police to bug his phones, intercept his emails and place him under surveillance. They didn’t even need a warrant to access his metadata and track down everywhere Monis had been and everyone he was talking to year after year.

They didn’t need fresh laws threatening journalists with 10 years’ jail for revealing Asio’s newfangled “special” operations. Look at the superb cooperation the press displayed during the siege: forgoing scoop after scoop to follow the police strategy of denying Monis the oxygen of publicity.

In the months ahead, with due acknowledgement for the skill they showed in the siege, a failure of policing will have to be faced. Despite having all the powers they needed at their disposal, and despite Monis’s erratic behaviour over so many years, the Australian federal police, the NSW police and Asio weren’t able to prevent him putting into effect his crazy plan.

Of course, it is likely that the police or ASIO did not stop Monis because ASIO and other related intelligence organizations wanted Monis to do exactly what he did. Please see my article “5 Reason To Question The Official Story of the ‘Sydney Siege’” and Tony Cartalucci’s article “The ‘Shape-Shifting’ Sheik and the ‘Sydney Siege’” for further discussion on this issue in particular.

Whatever the true nature of Monis may be – legitimate mental patient, patsy, or tool of Western intelligence agencies – there is clearly much more to the story than what the mainstream press is printing and promoting.

Regardless, the only thing that we can know with absolute certainty is that the Sydney Siege will be used as propaganda to the utmost effect by all Western and NATO governments in the push for further war. I It will also be used to justify an even greater police state at home in Australia.

Brandon Turbeville is an author out of Florence, South Carolina. He has a Bachelor's Degree from Francis Marion University and is the author of six books, Codex Alimentarius -- The End of Health Freedom, 7 Real Conspiracies, Five Sense Solutions and Dispatches From a Dissident, volume 1and volume 2, and The Road to Damascus: The Anglo-American Assault on Syria. Turbeville has published over 300 articles dealing on a wide variety of subjects including health, economics, government corruption, and civil liberties. Brandon Turbeville's podcast Truth on The Tracks can be found every Monday night 9 pm EST at UCYTV. He is available for radio and TV interviews. Please contact activistpost (at) gmail.com.
Posted by Admin at 12:32 PM