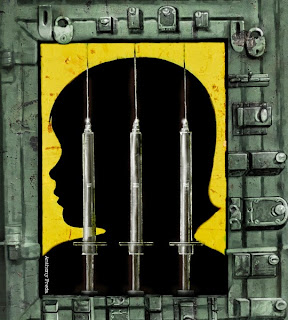 
When the facts surrounding the safety and effectiveness of vaccines begin to be brought into the light, the only option left for those who manufacture, promote, and/or force vaccines onto the general population is to silence the presentation of those facts. Indeed, it is also imperative that those same forces prevent any alternatives to vaccination and financially incentivized medical dogma from becoming known amongst the general public.

Such was the mode of attack taken by the Australian Competition and Consumer Commission in a case that dates back to 2013 against the homeopathic remedies company, Homeopathy Plus. In the early part of 2013, the ACCC instituted Federal Proceedings against Homeopathy Plus after claiming that the company was guilty of being “misleading and deceptive” after posting a series of three articles on its website that presented the Pertussis vaccine as being ineffective in preventing the disease and largely unreliable.

The Ministry of Truth also known as the ACCC also targeted the company due to their claims that homeopathic remedies are a safe and effective alternative to the vaccines. In addition, the ACCC has taken legal action against Homeopath Frances Sheffield.

The decision to take action against the company came months after the ACCC admits that the company removed the articles in question, yet the ACCC continues to push for an injunction to have the claims removed from the website. In other words, the ACCC is waging an expensive legal battle (ostensibly with taxpayer money) to forcibly remove claims from a website where they have already been removed.


In addition, other Ministries of Truth, the type of which Western society is replete, the Therapeutic Goods Administration Advertising Complaint Resolution Panel (CRP) and the Therapeutic Goods Administration (TGA) have issued orders of retraction against the company. Apparently removing information deemed unsuitable for the field slaves was not enough. The serfs must be re-educated in the proper manner and be instructed as to the inaccuracy of the articles questioning the veracity of the all-knowing Australian government and medical establishment - two institutions which have, together, been responsible for numerous unethical experiments on indigenous Australian peoples and the utter destruction of their lifestyle and cultures.

Regardless, because Homeopathy Plus refused to comply with the retraction orders of one of the innumerable government “oversight” agencies of the Australian government, the ACCC filed its cased in Federal court.

Not surprisingly, the court sided with the “regulatory agencies,” i.e. the pharmaceutical companies and ruled that the claims of the article were indeed misleading and inaccurate.

While the evidence actually suggests that the Pertussis vaccine is neither safe nor effective in preventing Whooping Cough, facts never get in the way of Government/Corporate collusion or politicized science.

As ArsTechnica reported, the court ruled that “In fact, the Vaccine is effective in protecting a significant majority of people who are exposed to the whooping cough infection from contracting whooping cough."

The court also criticized any claims that homeopathic remedies might help in preventing Whooping Cough. It stated that the articles posted on the companies’ website "made false or misleading representations that Homeopathic Treatments have a use or benefit" in preventing pertussis infection.

The penalties facing Homeopathy Plus will be decided after a hearing in February 2015 as will be the possibility of any future injunctive orders that might be issued.

Brandon Turbeville is an author out of Florence, South Carolina. He has a Bachelor's Degree from Francis Marion University and is the author of six books, Codex Alimentarius -- The End of Health Freedom, 7 Real Conspiracies, Five Sense Solutions and Dispatches From a Dissident, volume 1and volume 2, and The Road to Damascus: The Anglo-American Assault on Syria. Turbeville has published over 300 articles dealing on a wide variety of subjects including health, economics, government corruption, and civil liberties. Brandon Turbeville's podcast Truth on The Tracks can be found every Monday night 9 pm EST at UCYTV. He is available for radio and TV interviews. Please contact activistpost (at) gmail.com.
Posted by Admin at 6:33 PM