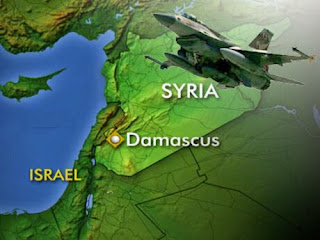 
On Sunday December 7, Israel reportedly launchedairstrikes inside Syria yet again, this time very close to Damascus in the area near Damascus International airport. Israeli airstrikes also took place in the town of Dimas which is located close to the Lebanese border.

At this time, Israel has yet to comment on the airstrikes.

Syrian state television has stated that “The Israeli enemy committed aggression against Syria by targeting two safe areas in Damascus province, in all of Dimas and near the Damascus International Airport."

State news agency SANA also stated that the strikes were a “flagrant attack on Syria.”

Reuters reports that “Residents in Damascus said they heard loud explosions and opposition activists posted photos online of jet streams in the evening sky and fiery explosions. Syria's army general command said on state television that there were "material losses in some facilities." It said the strike benefited al Qaeda.”

Further reports suggest that the targets of the Israeli jets were an agricultural airport in Dimas and an import-export warehouse in Damascus. Both of these locations are under control of the Syrian military and involve supplies and food greatly needed for the Syrian people.

These targets, of course, fit in with the larger trend of both Israeli and American airstrikes in Syria in the past that have targeted civilian locations, Syrian infrastructure, Syrian oil refineries, and, particularly, food centers such as grain silos.


While airstrikes are conducted under the guise of defeating ISIS, the fact is that these airstrikes have done little to even inconvenience the terrorist organization which itself is funded, directed, trained, armed, and controlled by the U.S., NATO, and the GCC. The airstrikes have been largely aimed at Syrian military interests as well as necessities of the Syrian people.

The attacks come as the Western-backed forces of the Islamic State launched a major assault on the Syrian air base in Deir el-Zour. That attack was ultimately repelled and defeated by the Syrian army.

For instance, on October 30, 2013, Israel attacked and completely destroyed a Syrian air defense base in Snobar Jableh, Syria which is located near Latakia, a port city on the coast of the Mediterranean. The base was alleged to have housed a surface-to-air missile battery.

It is also known that Israel launched attacks against Syrian forces and military convoys at least four times prior to the October 30 attack.

As recently as June, 2014, Israel launched a series of airstrikes against Syrian military positions under the pretext of retaliation for a cross-border attack which was almost certainly initiated by death squad fighters whose logistical inadequacy spilled over into Israeli occupied territory in the Golan Heights. Given the questionable circumstances surrounding the justifying incident – the killing of an Israeli teenager by an alleged anti-tank missile – one would be justified in questioning the Israeli story.

While the occasional attack on Syrian territory is bad enough, the fact is that Israel has apparently coordinated these attacks with the death squad directors on the ground so as to provide cover fire and diversions for death squad “swarming” and jihadist invasions.

For instance, in May 2013, WABC host and best-selling author Aaron Klein stated that an Israeli airstrike in Syria was closely coordinated with Turkey which, in turn, helped coordinate the death squad attacks to occur at the exact same time as the Israeli airstrikes. The sources speaking to Klein came from Jordanian and Egyptian intelligence agencies.


Israel’s air strike in Syria today was coordinated with Turkey, which in turn coordinated rebel attacks throughout Syria timed to coincide with the Israeli strike, according to Egyptian and Jordanian intelligence sources speaking to KleinOnline. The sources said the rebels did not know about the Israeli strike in advance but instead were given specific instructions for when to begin today’s major assaults against the regime of President Bashar al-Assad. “Almost the moment the Israel Air Force departed was the moment the rebel advance began,” added the Egyptian intelligence source. Multiple reports have noted how the Syrian rebels consist in large part of al-Qaida-linked jihad groups. The Egyptian and Jordanian sources described how immediately after today’s Israeli air strike the jihadist rebels used access roads to advance toward Damascus and began heavy clashes with Syrian military forces throughout the country.

Some have speculated that Israel’s continued incursions into Syrian territory is not only an attempt to weaken the military forces of the Syrian government and support the terrorists operating inside the country but to cause Syria’s air defense system to light up and give away its concealed positions. Regardless, Israel has once again demonstrated how it is, in reality, the most volatile state in the Middle East despite its claims to the contrary.

Brandon Turbeville is an author out of Florence, South Carolina. He has a Bachelor's Degree from Francis Marion University and is the author of six books, Codex Alimentarius -- The End of Health Freedom, 7 Real Conspiracies, Five Sense Solutions and Dispatches From a Dissident, volume 1and volume 2, and The Road to Damascus: The Anglo-American Assault on Syria. Turbeville has published over 300 articles dealing on a wide variety of subjects including health, economics, government corruption, and civil liberties. Brandon Turbeville's podcast Truth on The Tracks can be found every Monday night 9 pm EST at UCYTV. He is available for radio and TV interviews. Please contact activistpost (at) gmail.com.
Posted by Admin at 11:43 AM