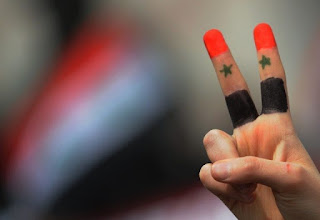 Syria is facing a war like no other country. It has been under siege since March, 2011, engineered by the Western world which has backed jihadists inside the country, jihadists which Western media outlets then promoted as “rebels.” The next phase of the war was for the same western “coalition” to enter Syria under the guise of fighting ISIS, the same terrorists the West had organized and supported for so long. The truth, however, was that, when the terrorist groups which the West sent inside Syria were unable to destroy the country, outside forces were required and those outside forces were the Western countries themselves.

The terrorist mercenaries did manage to achieve two goals for the West, however. The first was bringing chaos to Syrian system of secularism, high sciences and development both economic and military. The second was to give Western countries the pretext for deploying their troops to Syria. This was accomplished by destroying the medicinal factories, bombing and assassinating scientists, disrupting and destroying the universities and schools. No facility escaped the terrorists’ bombs which were later followed by airstrikes both the “coalition” of Western countries and sometimes by Israel. Our country witnessed the worst period ever in regards to suicide bombings, terror attacks, explosive belts, or car bombings targeting schools and murdering children. For instance, Ekrima Elementary School in Homs was bombed twice in 2014. The University of Damascus was also a target of the terrorists and the attacks that took place there produced many martyrs. The University of Lattakia and the bus stop nearby saw many people killed as it was timed to take place during rush hour. Many of the bodies were never identified. Even in Tartus, there were suicide bombings.

All of this was inn addition to the land mines left by terrorists.

One of the more recent and high profile victims was RT Arabic reporter Wafaa Shabrouni who is now receiving her medical treatment in Moscow.

It is difficult to count the number of times were under the threat of being bombed by the US, who bombed our people in Raqqa and our army’s positions in Deir ez Zour to give support to the terrorists every time we liberated our land from those cannibals and savages.


I remember when there was an attack on my city in September of 2018. It was led by Israel who bombed every research institution in the area. Unless you have lived through it, you cannot imagine the feeling when your sky is filled with enemy warplanes and your coastline is lined with enemy ships. I was an adult, of course, and I cannot imagine what it must have felt like to a child.

It is impossible to count the amount of people who have been forever changed by this war by being made an amputee, disabled, or blind. Those are the lucky ones who have survived. We also have to keep in mind the people who have lost their homes and their businesses.

Throughout this entire war, the terrorists of the West have targeted water and electricity stations which can (and has) led to diseases as it is doing in Yemen.

Even through all of this, through the great effort of our government and the great sacrifices of our soldiers, life was going on in schools and universities as well as our hospitals. Cancer treatment was provided for free. As you might suspect, terrorists also bombed the Albairon cancer treatement facility. Thankfully, there was no pandemic at the time.

And how did the West respond to all of this? Sanctions. Sanctions against the very people who were already suffering.

After nine years of war and sanctions, Syria is now attempting to defend itself against yet another enemy, this time in the form of the Coronavirus pandemic. We are all thankful, of course, that Syria was not the place this virus originated. If it had been, the West would have no doubt used the origin of the virus as an excuse to bomb Syria yet again, this time to save the world.

Now all of this brings a question to mind for the "world community" and particularly the Western world. Why are you not ashamed of your double standards as you pretend to care about human life in regards to Coronavirus but not when you bomb innocent civilians in Syria or destroy the lives of millions of people through sanctions and war? Why are you not ashamed of your ally Turkey cutting water from Syrians in al-Hasaka province amid a worldwide campaign for "deep cleaning?" Why do you not eliminate sanctions on Syria so the country can purchase much needed medicine and equipment?

As for the virus itself, I do not know whether or not it is a conspiracy. I do not know if it is natural or if it is a bioweapon spread by the same country that used a nuclear bomb on Hiroshima. I am not going to pretend I know what causes Coronavirus or what is the cure.

I do know that many doctors have stated that they are afraid of it and that Syria is following the world in taking precautions. But I should hasten to point out that, even during the war, Syria engaged in many cleaning campaigns to make sure our streets and cities were clean in order to protect us from diseases.

Our neighbors, Lebanon and Turkey, however, have seen the smuggling of people into Syria who have been infected with Coronavirus. Likewise, the presence of foreigners in the ranks of terrorists and the US military may play a role in the spread of the disease also. Given the history of the US in the region and Syria itself, who would be confident that they are not dealing with the virus themselves? Would you trust them? I certainly don't.

While the Western media is turning a machine of horror propaganda over the virus, the western public should at least be thankful they can sleep in their beds with no threat of missiles landing on them. You can go shopping and no suicide bombers will tear their bodies into shreds. You can at least feel safe in your homes. We do not have these luxuries but still we have the virus.

I do not wish for any of you to experience what we have experienced for the last nine years. You deserve to sleep comfortably in your beds at night free from terror. But so do we.

None of us fully know what is behind this pandemic, how serious it is, the cause or the cure so we must all be cautious. I congratulate every doctor and nurse working on the front lines and to Russia and China for giving help to countries who need it during this time. War, however, is ugly and Western foreign policy should be a deep shame to those nations.

I hope we can all be more united after this crisis ends and I hope that our economies - all of them - will soon repair themselves. I hope that, when this is all over, we are more united and more connected with one another.

Afraa Dagher is a political analyst currently residing in Syria. She has made numerous media appearances commenting on the current state of affairs inside Syria as well as the nature of the current crisis. She has appeared on RT, PRESS TV, and is a regular guest on Activist Post writer Brandon Turbeville’s Truth on the Tracks radio program. Her website is www.SyrianaAfrona.wordpress.com.

Provide, Protect and Profit from what’s coming! Get a free issue of Counter Markets today.