How Will America End? A Bang, A Whimper, Or Something Else 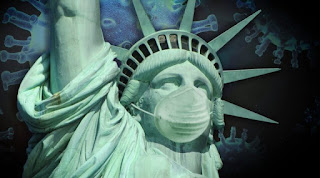 Hope is a wonderful thing. Even in the darkest of times, hope gives us the strength to keep working toward a goal in the face of impossibility or to keep fighting for life even though all evidence points to the contrary. Hope is what can lead to miracles, to beauty, and to revolutions.

But hope can be a treacherous thing as well. It can blind those standing on train tracks to believe that the train heading towards them will stop in time or to believe, despite hearing the whistle as clear as day, that the light at the end of the tunnel is not a train at all. It can fool people living in unbearable circumstances, who are listening to their own governments denounce them as criminals and parasites worthy of eradication to believe that things are going to get better. Things will get better, in their mind, because they have to.

Despite everything I have seen from all levels of government in the US, the mainstream media, and worst of all, from the American people, I still have to admit that I have hope that my country will realize the error of its ways and attempt to return to some sense of sanity and normalcy. I hope that the American people realize that deliberately crashing our economy, shredding the Bill of Rights, and placing the majority of the population on house arrest was not only a bad idea but an act of treason on the part of government officials and a terrifying lesson in why government by emotion, outrage mob, and fear always leads to the same thing - the imposition of tyranny, the erosion and elimination of civil liberties, and the empowering of would-be tyrants to no longer "would-be" but "be."

I still have that hope but I do not have expectations.


Instead, I expect more and more people will come to question the wisdom of acquiescing to quasi martial law. I expect those numbers to grow but not so great a number as to have any real effect in forcing change and a return to a respect for civil liberties and general sanity. There will be more protests. Perhaps there will be riots and violence. I also expect, whatever happens, it will be entirely too late.

But even with that being said, a sizeable portion of the population will continue to pat itself on the back for being good comrades and following all the rules. They will live their lives believing that staying at home and snitching on their neighbors who did not live in fear, saved the world from a deadly virus. Most of them will remember our current time this way. But no doubt many of them will forget what the virus was called and will barely remember anything more than a few blurry weeks at home before something happened and we justifiably came to live the way we do.

But it is because of this strange hope that I have written yet another article despite believing the former would be my last. I hope that, even if we do not change course in the immediate future, there will at least be a record of dissent and that not everyone agreed with throwing our rights to the wolves and giving our voices away to sheep. Perhaps this registered dissent will be a seed for someone, long in the distant future, to become inspired and attempt to regain what the generations currently inhabiting the earth tossed aside in fear and laziness.

But that is my hope, not my expectation.

As Alan Watt of CuttingThroughTheMatrix recently stated, "History is full of people rebelling and even having revolutions to try and get rights and freedoms from those that deemed themselves superior, who believed they had the right to rule people. It took centuries to get rights for the people and you're watching it all go down the tubes voluntarily under the guise of the big psych-terror drive you're watching day after day after day. And you'll never get those rights back once you give them up."

If you are unfamiliar with how we got to where we are, I highly recommend looking in to Watt's work. He predicted what we are going through today nearly 25 years ago because, having been a student of history, he knew the plan that was unfolding.

So, in conclusion, as Americans huddle in their homes, willingly giving up their rights and openly calling for more of their and their fellow citizens' rights to be taken away, I can't help but think the country that was itself put on a ventilator in 2001, might well have heaved and gasped for the last time. Watching Americans call police on their neighbors for walking their dog or for having dinner with friends, I cannot help but feel like my country is all but dead.

So there it is. America is coming to an end. But it is not ending with a bang nor a whimper, but to the sound of rapturous applause.

Brandon Turbeville writes for Activist Post – article archive here – He is the author of seven books, Codex Alimentarius — The End of Health Freedom, 7 Real Conspiracies, Five Sense Solutions and Dispatches From a Dissident, volume 1 and volume 2, The Road to Damascus: The Anglo-American Assault on Syria, The Difference it Makes: 36 Reasons Why Hillary Clinton Should Never Be President, and Resisting The Empire: The Plan To Destroy Syria And How The Future Of The World Depends On The Outcome. Turbeville has published over 1500 articles on a wide variety of subjects including health, economics, government corruption, civil liberties and, most notably, geopolitics and the Syrian crisis. His most recent release is a book of poetry, Dance, Amputee. Brandon Turbeville’s radio show Truth on The Tracks can be found at UCYTV. His website is BrandonTurbeville.com. He is available for radio and TV interviews. Please contact activistpost (at) gmail.com.


He is from Columbia, SC.

Provide, Protect and Profit from what’s coming! Get a free issue of Counter Markets today.
Posted by Admin at 7:00 AM