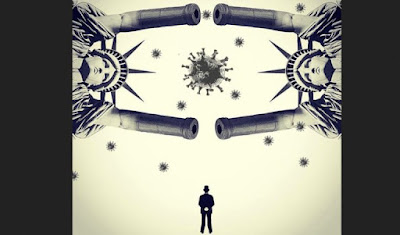 Although it was nearly twenty years ago, I can remember 9/11 like it was yesterday. I remember the shock of hearing about the planes crashing into towers, at first believing it was a tragic accident and quickly learning it to be otherwise. I remember being told that 19 hijackers, part of a fundamentalist plot to destroy America, were behind the attacks and that the mastermind was a man in a cave in Afghanistan named Osama bin Laden.

As all of America was glued to their television screens, many rushed out to give blood in an effort to at least do something to help one another. George W. Bush's answer for Americans was to go to work and then go out and shop. Americans dutifully complied. But the government's answer, in tandem with mainstream media, was also to be afraid. Very afraid. Americans also complied with this request, perhaps more than any other.

In the days and weeks after the initial shock, a college professor informed me about a bill called the PATRIOT ACT that would essentially eviscerate much of the Constitution and Bill of Rights. After class, I questioned him further about the bill, which he explained, and suggested that if I really wanted to understand what was happening, I should read 1984 by George Orwell. I went home and did just that and was surprised to learn that not only was he right, but that I was watching what I was reading happen in front of me in real life.

I watched as the fear of speaking your mind and saying certain words became known as freedom. I watched as Americans came to assume that their communications were listened to, frightened of what they said, but justifying it as they praised their country for being unlike the totalitarian governments of the past. Peace became war. Any suggestion that invading Afghanistan was wrong was unpatriotic. In fact, any criticism of the government was considered unpatriotic and anyone who valued freedom over temporary security was borderline a traitor.


I watched as the United States became The Homeland and I watched as my friends had their window busted out of their car because they did not have one of those ridiculous window flags.

Still, shortly after the event itself, I began speaking out against the erosion of our Constitution and the Bill of Rights. I questioned the official story of 9/11 and fought against the passage of the PATRIOT ACT. In those days, anyone who did either of these things was considered either woefully ignorant and naive or a traitor who was giving morale support to the enemy.

I spoke out after 9/11 and was largely alone with a few notable exceptions. I was forced to watch the majority of my fellow Americans give away the most precious thing they had, the things which no other country could lay claim to, and the thing that they claimed they were supporting war to protect. America gave away a huge chunk of its rights in the wake of 9/11 and, though they were promised the measures were only temporary, twenty years on we have never received them back.

Instead, police officers are now often indistinguishable from military soldiers, the United States is still in Afghanistan as well as Iraq, Libya, Syria, Somalia, Ukraine, and a host of theatres across the world where its undefinable "interests" apparently lie. It is now a foregone conclusion that cellphone, internet, and all other communications are monitored. It is well understood that the iron fist of the state can come down with lack of due process and the Second Amendment is under daily attack. Torture is now general practice for foreign and domestic arrestees.

Now, here we are close to twenty years later. Americans once again have a shadowy nemesis for which our government has once again failed to provide adequate information. Once again, the governmental response is not a robust rethinking of how we got to be where we are, (in this case how medical care is provided, who has access to it, or the overarching philosophy behind it), but a massive police state, quasi martial law, and the evisceration of what is left of the liberties and rights they didn't give away twenty years ago or give away gradually in the time between.

This time, it is not so much the President leading the charge to burn the Constitution, but Governors all across the country, acting in concert with one another. But they aren't acting alone. Because of the massive propaganda mouthpiece of the mainstream media blasting hysteria and panic as well as the desired conclusions they intend for their audiences to reach, many Americans are demanding that their rights be taken away and that they and their fellow citizens be forced off the streets and into their homes at gunpoint.

My opposition to the potential Lockdown is twofold but principally it is based on the fact that over two hundred and thirty years of rights and liberties should not be shredded on the basis of any threat, real or imagined. Americans either have rights or we don't. There is no asterisk in the Constitution that states the Bill of Rights is null and void in the event of a terrorist attack or a virus outbreak. If we do not maintain our rights in a time of crisis, then, simply put, we do not truly have rights at all.

If we do not maintain these rights, our country, such as it is, ceases to exist.

As Peter Hitchens, one of the few critics of this Lockdown mentality (happening all over the world and, in his case, Britain) wrote in his recent article for the Mail Online,


All the crudest weapons of despotism, the curfew, the presumption of guilt and the power of arbitrary arrest, are taking shape in the midst of what used to be a free country. And we, who like to boast of how calm we are in a crisis, seem to despise our ancient hard-bought freedom and actually want to rush into the warm, firm arms of Big Brother.

Hitchens' article is well worth reading, not only for his views but for his critique of the scale of the pandemic, which is highly questionable.

Secondly, we are quickly driving this country to a second Great Depression where unemployment is at levels never before seen and where only the 1% and the major banks have anything resembling wealth. This Depression will be so devastating that it will make the first look weak in comparison, not just because of employment but because of the real human toll after decades of globalism, Free Trade, and urbanization have gutted this country of its workforce, manufacturing, healthcare, education, production capabilities, and general living standards. With more Americans living urban lives and fewer and fewer farms by the day, the Second Great Depression will kill many more people than the virus and leave those left alive scrounging for crumbs at the bottom. Already, since the beginning of this virus emergency, we have witnessed a huge transfer of wealth from the lower classes to the higher and we will no doubt witness more as this insane Lockdown attempt continues.

After the Lockdown passes, Americans will complain about low wages and lack of work. They will wait in lines for benefits that may or may not exist and that will be lower than their current living standards require. Unlike the loss of their rights, the benefits will be temporary. But Americans won't be able to fully blame Wall Street this time around since it was the media and the people who listen to it who were howling in the streets for Lockdowns and shutdowns. They will have gotten what they wanted as well as the opportunity to live to regret it.

So here I am, twenty years after a writing career began as a result of generally good people who were frightened into giving away their rights, writing about exactly the same thing yet again. Of course, there may be time to reverse the direction in which we are heading. The next few weeks will most likely determine that matter. One thing is for certain, however, if Americans give up their rights now, they will never get them back.

I don't have any illusions about the effect this article will have on the direction we are heading as a nation. Instead, I expect it to bring about more criticism, more insults, and more claims that I am no longer "credible" as the propaganda repeaters seen on the major cable networks are credible. But it will be worth it, for no other reason than to register my voice so that, for the record, there was at least a few people who retained their sanity through this worldwide era of panic and did not willingly sacrifice his rights on the altar of fear.

If we are able to step back from the abyss, perhaps the "credibility" and respect that I lose from peers as a result of this article will someday be returned. But if we are not able to step back, I can't imagine anyone will be able to remember anything I've said here and, if that is the case, it probably wouldn't matter if they did.

Brandon Turbeville writes for Activist Post – article archive here – He is the author of seven books, Codex Alimentarius — The End of Health Freedom, 7 Real Conspiracies, Five Sense Solutions and Dispatches From a Dissident, volume 1 and volume 2, The Road to Damascus: The Anglo-American Assault on Syria, The Difference it Makes: 36 Reasons Why Hillary Clinton Should Never Be President, and Resisting The Empire: The Plan To Destroy Syria And How The Future Of The World Depends On The Outcome. Turbeville has published over 1500 articles on a wide variety of subjects including health, economics, government corruption, civil liberties and, most notably, geopolitics and the Syrian crisis. His most recent release is a book of poetry, Dance, Amputee. Brandon Turbeville’s radio show Truth on The Tracks can be found at UCYTV. His website is BrandonTurbeville.com. He is available for radio and TV interviews. Please contact activistpost (at) gmail.com. He is from Columbia, SC.

Provide, Protect and Profit from what’s coming! Get a free issue of Counter Markets today.
Posted by Admin at 7:56 PM