City of Deir el-Zour, SyriaDeir ez-Zor: 'It Has Become Clear That Syrian Army is Winning the War' 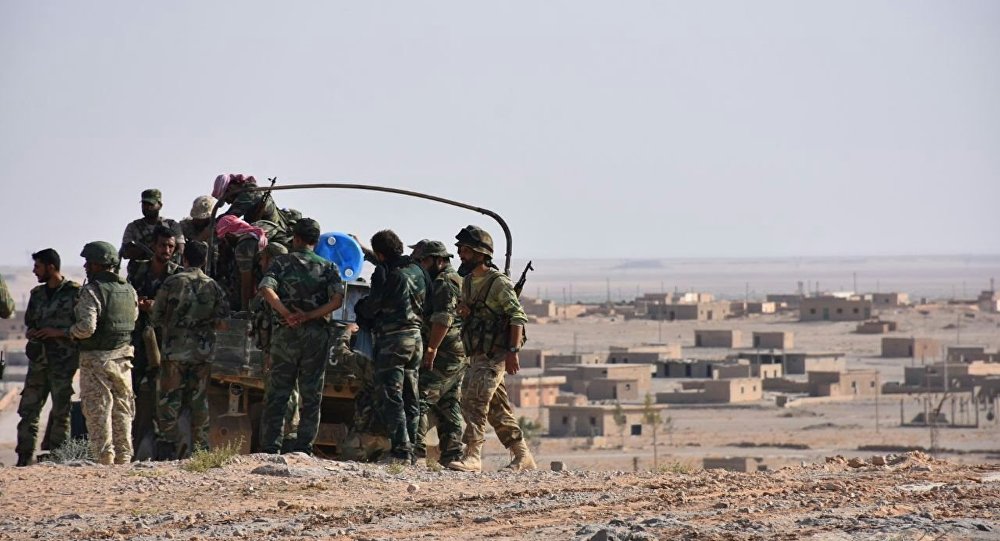 The advances of the Syrian Arab Army (SAA) backed by the Russian Aerospace Forces in Deir ez-Zor will lead to the ultimate defeat of Daesh (ISIS/ISIL), experts told Sputnik. However, the eradication of Daesh doesn’t mean the end of the war while Idlib and some other parts of the country still remain in the hands of extremists.

The breach of the Deir ez-Zor blockade is an important landmark since it will lead to the defeat of Daesh in Syria, Brandon Turbeville, an American geopolitical analyst and author of the book "The Road to Damascus," told Radio Sputnik.

"The Syrian military just have made massive gains sweeping across the east and I personally believe this is going to be the end of ISIS [Daesh] in Syria," Turbeville said expressing hope that Deir ez-Zor will soon return to normal life and "become Syria again" just like eastern Aleppo did earlier.


However, the analyst highlighted that one should draw a distinction between defeating Daesh and bringing an end to the war: "Although the siege has been lifted Syria is not out of the war."

"We still have Idlib, we still have a number of areas controlled by terrorists. Idlib is going to be, probably the biggest battle of Syria," he noted, clarifying that terrorists have fled to Idlib from other parts of Syria over the past few years.

Additionally, Damascus is likely the face the Kurdish issue in northern Syria, which has to be resolved, the analyst remarked.

While solving these problems one should take a look at "where these [extremist] groups [in Syria] are getting their funding and their support," he noted.

According to the geopolitical analyst, Syrian jihadists have long been receiving support from NATO powers and the Gulf States. If the US coalition truly wanted to stop these groups "then the Western powers should stop funding them," Turbeville said.

He bemoaned the fact that the Americans have little understanding of what is going on in Syria because of the US mainstream media propaganda campaign, which makes the American people believe that Syrian President Bashar al-Assad "is killing his own people." Besides, the hysteria over Russia's alleged meddling in the US election continues to gain pace in the US.

"When you look at our [American] mainstream media reports, you understand that people don't know what's going on because it's just a kaleidoscope of propaganda," he said. "Keep in mind, all of [US] mainstream media outlets are giving them the same exact propaganda narrative."

The analyst foresees that now that the war against Daesh nears its end, NATO powers, Israel and the Gulf States have realized that their attempts to destroy the Assad government have failed. In light of this they will make attempts to dismember the Syrian state, Turbeville surmised.

Dr. Tim Anderson, a senior lecturer at the University of Sydney, Australia, and author of the "Dirty War on Syria" also believes that the breach of the Daesh siege of Deir ez-Zor has dealt a lethal blow to the terrorist organization.

"The advances in Deir ez-Zor are central to the defeat of Daesh," Dr. Anderson told Sputnik. "It also opens up cooperation with Iraqi forces and will regain Syria's major oil fields."

Although the burning issues regarding Raqqa, Idlib, security relations with Turkey and the US presence in Syria have yet to solved, "it is clear that Syria is winning the war," the Australian academic stressed, adding that "Israel, the US, Saudi Arabia and Jordan have already recognized this."

According to Anderson, with the recent advances in Deir ez-Zor, "the Syrian alliance has effectively defeated the war waged against it by the US-led coalition," however, "ending terrorism might take longer," he admitted.

The academic highlighted the importance of Russian-Turkish-Iranian collaboration, which Anderson emphasized is "quite successful."

He believes that "Turkish participation is critically important for securing Syria's northern border from international terrorists," while "Russia and Iran have been making diplomatic and strategic gains that Syria, by itself, could not."

Meanwhile, the Trump administration, which is being torn by internal conflicts, seemingly cannot "extract itself from losing gambits," Anderson remarked, adding that it is "helping cement regional alliances" in the Middle East, independently from the US.


On September 5, the Syrian Arab Army backed by the Russian Aerospace Forces managed to break the three-year Daesh siege of the city of Deir ez-Zor.

The city, located on the shores of the Euphrates River to the northeast of Damascus, has been besieged by Daesh for over three years, with food and ammunition only being delivered by air, while helicopters from the city of Qamishli have been evacuating the wounded and delivering essential supplies to the city's population.

This article was first published at Sputnik International
Posted by Admin at 3:07 PM