Here’s How the US, Israel, al-Qaeda and ISIS Work Together in Syria 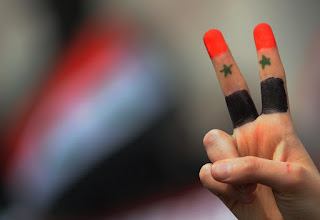 The Syrian battlefield is now witnessing an escalation of the war. This is despite the fact that it is supposed to be a time of cessation of hostilities brokered by the US and Russia.

Israel has been attempting to drive the Syrian army out of Al-Quneitra. Israel’s objective is to join this part of the Golan Heights to the territory it controls, thereby creating a buffer zone like the one it once had in southern Lebanon. In order to achieve this objective Israel regularly bombs Syrian military positions in the area, including Syrian Arab Army artillery positions, radar stations, etc.

There is a UN Security Council Resolution (UNSC Resolution number 338) dated 22nd October 1973, which supposedly established a Syrian-Israeli ceasefire in this area. There is also a UN force – UNDOF – set up in 1974, which is supposed to supervise the ceasefire line. However, Israel has forced out most of UNDOF from the area, and in practice Israel simply ignores the terms of Resolution 338 and violates it at will.

By attacking the Syrian Army in Al-Quneitra Jabhat Al-Nusra – Al-Qaeda’s local franchise – is helping Israel. Al-Nusra and Al-Qaeda fighters are attacking Syrian military positions important for the defence of Syria and of the Arab nation from Israeli aggression.


These Al-Nusra and Al-Qaeda attacks would not be possible without air support from Israel. Indeed, Israel has admitted many times that it supports these terrorists, whom it calls “moderate rebels”.

Israeli hospitals actually treat Al-Nusra terrorists, and Israeli ambulances regularly enter Syria to evacuate injured Al-Nusra terrorists via the Jbata crossing in northern Al-Quneitra to the Occupied Palestinian territories. Many of the weapons seized by the Syrian army from the terrorists as they tried to cross into Sweda Province in southern Syria to surround Damascus were made in Israel.

Lately the Syrian Army has carried out a series of successful offensives in the area, defeating the Western and Arab Gulf-backed “rebels”. Over the last few months the position of these so-called “rebels” has become desperate.

For that reason Israel has recently stepped its attacks on Syrian positions inside liberated Al-Quneitra, launching missiles into Syrian territory from its positions in the Israeli occupied section of the Golan Heights.

The Syrian military reported these attacks to the Syrian government. A senior Syrian official visited the area. He ordered the Syrian military in the area act to defend Syrian territory from Israeli attack. The very next day Syrian Air Defence shot down an Israeli F-16 warplane and an Israeli drone. The F16 was brought down on the border line in a place called Bir Ajam, which is under al-Nusra control. The drone was brought down in a place called Sa’sa’, which is inside Syrian army controlled territory.

This action marked a dramatic shift of policy on the part of the Syrian government, decisively responding to the attacks by the Israelis. It represents a direct counter to Israel’s aggression on Syrian land.

At around this time the US and the Russians, after prolonged negotiations, announced a ceasefire, the terms of which are secret.

The general opinion in Syria is that the terms of the ceasefire are secret because the US has longstanding obligations to the “moderate rebels” – who are neither “moderate” nor “rebels” but are actually terrorists – but has had to accede to demands from the Russians that it separates and identifies those fighters it supports from those it does not.

Had the US announced the terms of the ceasefire, the the morale of the fighters would have collapsed, since they would have confirmed that they had in effect been defeated. They might even have rebelled against the US.

However, what followed next shows that the US – the true master of this war, and the one which confers immunity on its chosen terrorists by calling them “moderate rebels” – can never be trusted in any quest for a peaceful solution to the war against Syria. The U.S. broke the ceasefire by striking a Syrian military airbase in Deir Al-Zour, located in the Thardeh Mountains.

This is a tough target for ISIS to capture, and it requires coordination between the US led coalition and ISIS against the Syrian Arab Army to give them the chance to do so. The objective is for ISIS to capture the airbase there, which will give ISIS control of the city and ultimately over the whole province.

The US claims that despite its powerful satellites and other methods of surveillance it could not identify the Syrian Arab Army’s positions and that the attack was a “mistake”.

We – the Arab people of Syria and Iraq – have long become accustomed to such “mistakes”. After all we remember the US-led coalition using similar rhetoric to drop weapons for ISIS in their stronghold along the border with Iraq, which it just so happens is also, interestingly enough, the border of Deir Al-Zour province.

That was the US’s gift to the barbarians of ISIS. Over 100 brave Syrian soldiers were martyred, and Syrian military positions resisting ISIS were destroyed and overrun.

Maybe I have got it the wrong way round. Maybe I should say it another way: What a great gift the barbarians of ISIS have given to the US – giving them the pretext to bomb Syria – the main country of the Resistance Front, and the only Arab country which together with Hezbollah resists Israel!

Meanwhile, Israel bombed a Syrian site in the south of Syria, claiming the life of another Syrian soldier.

Are we to believe this is all just coincidence?

The good news is that the Syrian Arab Army with Russian air support has been able to stop ISIS taking over the airbase near Deir-ez-Zour. However in the fighting the terrorists, who have been given advanced anti-aircraft weapons, managed to down a Syrian airplane.

I have personally met a Syrian soldier who survived the US coalition bombing in Deir-ez-Zour. He told Syrian Formal TV that US drones were flying over the airbase for more than four and a half hours before the US aircraft made their “mistake”. He said that he originally thought they were scanning the area to help the fight against ISIS. However he gradually realised that the drones were actually undertaking surveillance of the base itself – of its equipment, tanks, ammunition, etc. Later, the US aircraft destroyed all this whilst the ISIS terrorists were screaming Allah Akbar!

That brought back memories of the US led coalition drone that flew over the Presidential Palace in Lattakia, which our air defenses shot down over a year ago.

Would any sovereign country accept foreign powers bombing its army in its own land?

Add to that the Turkish troops in northern Syria who are – under UN cover – wanting to send 40 trucks of who knows what into Syria!

The UN prevented the Syrian authorities from checking these trucks, but they were still labeled “humanitarian aid.” What kind of aid is it really and who is it heading to? “Moderate” suicide bombers? ISIS?

And why are so many areas in Syria that are being besieged by terrorists being ignored by the UN? After all no one asks the ‘international community’ (ie. the US and its friends) to lift the unjust sanctions on Syria to prevent starvation!

Syrians are wondering: is our war really with ISIS and Al-Qaeda or with the US and Israel – the true aggressors and puppet-masters – who have always wanted a long war against Syria in order to break and occupy us?

This article first appeared at The Duran.

Afraa Dagher is a political analyst currently residing in Syria. She has made numerous media appearances commenting on the current state of affairs inside Syria as well as the nature of the current crisis. She has appeared on RT, PRESS TV, and is a regular guest on Activist Post writer Brandon Turbeville’s Truth on the Tracks radio program. Her website is www.SyrianaAfrona.wordpress.com.
Posted by Admin at 1:08 PM