Mainstream Media A "No Fly Zone" For Truth 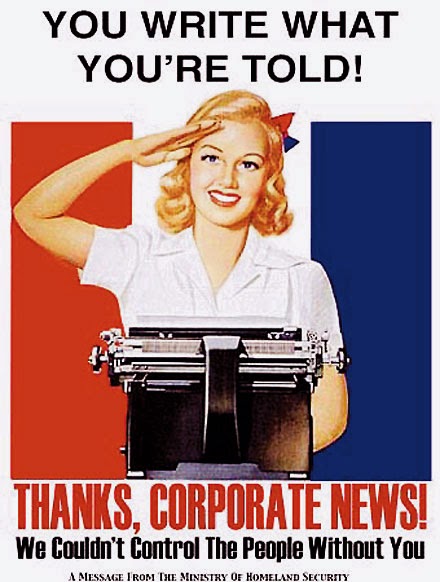 
It just keeps coming. The pro-war propaganda touting the necessity of intervention and invasion of Syria and the attempt to paint President Bashar al-Assad as a villain and butcher shows no sign of letting up anytime soon, at least not until the goal of the destruction of the secular Syrian government is completed and the Anglo-American oligarchy turns its sights on Iran.

And why would it let up? Such is the nature of war propaganda. Its purpose is to goad a gullible public, made up of individuals who would, in ordinary circumstances, not desire war and, in virtually all circumstances, have nothing to gain from it, into supporting an unfounded, immoral, and costly military operation against a people who are very similar to themselves.

It is precisely because of this fact that the propaganda must be incessant and continual. With every report drumming up support for US military intervention in Syria and coloring every report of events taking place inside or surrounding the country, there is no article in any mainstream media outlet that does not make a series of unfounded claims and reinforce the propaganda narratives provided by the State Department.

Such is the case with an article posted by VOX on October 9, entitled “Buffer Zones: the New International Plan For A Mini-Invasion Of Syria, Explained.” Although certainly not the only example of Western pro-war propaganda, it is certainly a perfect one to demonstrate how far the American people are being led astray by their supposed “fourth estate.”

In its report, which is centered around the idea of buffer zones, a topic which a number of writers in the alternative media have been discussing since the very beginning of the crisis, Max Fisher writes,

The idea of a buffer zone is that some outside country or countries would occupy a little slice of Syria and turn it into a haven for displaced Syrians. The idea is being proposed in response to the Islamic State of Iraq and Syria (ISIS)'s invasion of the Syrian town of Kobane, which is creating a refugee crisis along Turkey's border.


Fischer continues his description of the plan for a buffer zone by writing,

The idea was to protect Syrian civilians from Syrian leader Bashar al-Assad, who was (and still is) slaughtering people en masse, by carving out small pieces of territory within Syria that would be safe from Assad. The idea now is fundamentally the same, except that the safe zones would be protect civilians from Assad and from ISIS.

There has never been any evidence that Bashar al-Assad’s forces have ever intentionally targeted civilians. In fact, there never would have been a civilian crisis to begin with had the United States, NATO, and the GCC not funded death squads, terrorists, and mercenaries to create such a crisis in the service of attempting to overthrow Assad’s government.

The buffer zone will not turn into a haven for displaced Syrians. It will be turned into a haven for death squads and terrorists funded, armed, controlled, and directed by the United States, NATO, and the GCC.

Indeed, a “buffer zone,” in Northern Syria, has been a wish of NATO since the beginning of the Syrian crisis. With the establishment of this “buffer zone,” a new staging ground will be opened that allows terrorists such as ISIS and others the ability to conduct attacks even deeper inside Syria.

Working together with its NATO/GCC allies as well as the ever-present provocateur Israel, the United States is helping to create a buffer zone in the North and East of Syria while continuing to facilitate the opening of a "third front" on the Syrian border with Israel.


It is important to remember that the U.S. airstrikes and its attempts to create a “buffer zone” inside Syria are nothing more than a farce. The death squads running amok in Syria are themselves entirely creatures of NATO and they remain under NATO’s command. The true enemy of ISIS, Khorasan, and the cannibals of the Levant has always been and continues to be Bashar al-Assad.

Nevertheless, Fischer continues his propaganda spiel by stating that the idea of a “buffer zone” was “an idea that got heavy discussion in 2012, when it was raised by a number of foreign policy thinkers, including former State Department Director of Policy Planning Anne-Marie Slaughter, as a way to ease the killing in Syria.”

Again, Fischer’s statement is grotesquely false. Slaughter’s raising the idea of a buffer zone in Syria had nothing to do with a desire to “ease the killing in Syria” but a desire to increase it. Even more dangerous to the rest of the world, Slaughter’s idea was based on the desire to attack Russia using an attack on Syria as a proxy.

Slaughter’s op-eds, of course, betray an underlying reason for her obsessive warmongering against Syria – the strategic desire to weaken Russia. In this, Slaughter reveals herself as an adherent to the Brzezinski doctrine as it is espoused in The Grand Chessboard.[1] Even if Slaughter does not openly state her affinity for such a destructive and provocative foreign policy by name, her ideology is revealed by both her actions and her work.

Indeed, in her April, 2014 op-ed for Project Syndicate, entitled “Stopping Russia Starts In Syria,” Slaughter is nothing if not obvious about her offensive geopolitical targeting of the Russian Federation as well as that of China and Japan. She writes that

The solution to the crisis in Ukraine lies in part in Syria. It is time for US President Barack Obama to demonstrate that he can order the offensive use of force in circumstances other than secret drone attacks or covert operations. The result will change the strategic calculus not only in Damascus, but also in Moscow, not to mention Beijing and Tokyo.

Regardless of Putin’s initial motivations, he is now operating in an environment in which he is quite certain of the parameters of play. He is weighing the value of further dismemberment of Ukraine, with some pieces either joining Russia or becoming Russian vassal states, against the pain of much stronger and more comprehensive economic sanctions. Western use of force, other than to send arms to a fairly hapless Ukrainian army, is not part of the equation.

That is a problem. In the case of Syria, the US, the world’s largest and most flexible military power, has chosen to negotiate with its hands tied behind its back for more than three years. This is no less of a mistake in the case of Russia, with a leader like Putin who measures himself and his fellow leaders in terms of crude machismo.

It is time to change Putin’s calculations, and Syria is the place to do it.

After repeating the tired, disproven, and borderline idiotic propaganda of Assad’s alleged “chemical weapons attacks,” “killing his own people,” and “barrel bombs,” Slaughter attempts to cover up what is nothing more than a geopolitical strategy as a humanitarian issue.

Slaughter laments the fact that “It is impossible to strike Syria legally so long as Russia sits on the United Nations Security Council, given its ability to veto any resolution authorizing the use of force.” However, she continues her article by stating that the United States should act anyway, unilaterally or multilaterally, by striking Syria and, at the very least, destroying its “fixed wing aircraft.”

The US, together with as many countries as will cooperate, could use force to eliminate Syria’s fixed-wing aircraft as a first step toward enforcing Resolution 2139. “Aerial bombardment would still likely continue via helicopter, but such a strike would announce immediately that the game has changed. After the strike, the US, France, and Britain should ask for the Security Council’s approval of the action taken, as they did after NATO’s intervention in Kosovo in 1999,” she states.

Equally important, shots fired by the US in Syria will echo loudly in Russia. The great irony is that Putin is now seeking to do in Ukraine exactly what Assad has done so successfully: portray a legitimate political opposition as a gang of thugs and terrorists, while relying on provocations and lies to turn non-violent protest into violent attacks that then justify an armed response.


Slaughter, of course, was angry that the incessant and nonsensical propaganda of her former office, the US State Department, and other Western governments across the world largely failed to manufacture a string of lies that would serve to effectively motivate Americans to gear up for war yet again.

By no stretch of the imagination is Fischer and VOX’s blatant propaganda piece an isolated or especially significant presentation. The article is, however, representative of the incessant propaganda fed to Americans day in and day out. It is an example of just how far astray the general public in the United States has been led. It is also an example of just how discredited mainstream media and Western media outlets actually are.

Obama Accuses Himself Of Terrorism

Brandon Turbeville is an author out of Florence, South Carolina. He has a Bachelor's Degree from Francis Marion University and is the author of six books, Codex Alimentarius -- The End of Health Freedom, 7 Real Conspiracies, Five Sense Solutions and Dispatches From a Dissident, volume 1and volume 2, and The Road to Damascus: The Anglo-American Assault on Syria. Turbeville has published over 300 articles dealing on a wide variety of subjects including health, economics, government corruption, and civil liberties. Brandon Turbeville's podcast Truth on The Tracks can be found every Monday night 9 pm EST at UCYTV. He is available for radio and TV interviews. Please contact activistpost (at) gmail.com.