It is well-known among informed observers and virtually anyone that has even the smallest shred of discernment that mainstream media outlets are nothing more than the mouthpieces for their respective governments, banks, and corporations. These outlets act as a clear propaganda machine drumming up the beat for war by the presentation of clever narratives, subtle falsehoods, and outright lies.

Such deceit relies on the trust of a beguiled public who simply cannot fathom the idea that they are being lied to on such a mass scale. Indeed, the secrecy of the true agenda is what gives propaganda its power. So it is very rare that mainstream outlets, their “journalists,” or other major figures openly state the agenda that is behind their reporting and gives purpose to their every word.

But this is exactly what Robert Caruso of the Boston Globe, Huffington Post, The Guardian, Daily Beast, The Jerusalem Post, and other mainstream outlets did in a fit of rage yesterday evening.

Caruso is well known for his hardcore adherence to the absurd notion that Bashar al-Assad is committing atrocities against the Syrian people, that there is such a thing as “moderate rebels,” and that the U.S. and its NATO allies should arm terrorists and engage in military operations inside Syria.

The statements come after a Twitter fight erupted between himself and Mimi al-Laham, (aka SyrianGirl), a Syrian activist and geopolitical analyst who has been critical of the role the West has played in funding, directing, arming, and controlling terrorists for the purposes of destroying the secular government of Bashar al-Assad.

The two traded barbs for some time. During their back and forth, however, Caruso made the statement, "@Partisangirl I'm enjoying this conversation. I will enjoy your beloved Syria being torn apart with violence and Assad in exile even more. 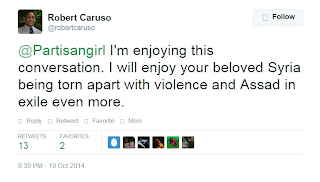 Caruso's response, of course, was in no way out of character. Caruso has Tweeted similar ideas in the past: 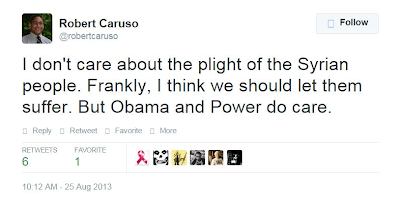 Normally, the social media ravings of a hack journalist that writes for discredited media outlets would not draw attention. But Caruso’s statements, befitting of a bloodthirsty warmonger, should be seen as illuminating of the general mode of thought that pervades mainstream outlets in regards to foreign wars and imperialism.

While generally hiding under the guise of a desire to “protect civilians” and “spread democracy,” the true aims are the destruction of a secular government, displacement of a people, and the expansion of empire across the globe. While low-level worker bees like Caruso undoubtedly shill with pleasure for money, considering the wages paid by a number of these outlets, a soul can be bought for a relatively small amount of money these days.

Caruso himself is no stranger to murder and pillage. According to the Huffington Post,

He served with a Joint Task Force, the Office of the Secretary of Defense, the Bureau of Diplomatic Security at the Department of State, and the Special Inspector General for Afghanistan Reconstruction (SIGAR). Robert is a veteran of the United States Navy and deployed to support Operation IRAQI FREEDOM and ENDURING FREEDOM.

Still, it is rare for mainstream propagandists to actually state their intentions so openly in a public forum. Such was the case when Anne Marie Slaughter (appropriately named) wrote an article in which she revealed how the spreading of Democracy and humanitarian concerns in Syria were only a cover for an attempt to confront Russia. The difference between Caruso and Slaughter, however, is that Slaughter’s op-ed was at least well thought and carefully crafted, not an emotional outburst.

Caruso soon after began Tweeting excuses regarding the reason his offensive Tweets were sent out. He appeared to claim that he was hacked but he also claimed that he was not hacked. Much like his articles, however, there is no reason to take his claims of hacking seriously.

If Caruso and his employers wanted the Syrian people to suffer, then they have succeeded in their mission. Over 170,000 people have now been killed. Infrastructure has been devastated. Buffer Zones and No-Fly Zones are being considered and savage terrorists are now running rampant throughout most of the country. Robert Caruso, his colleagues, and the organizations that employ them can now sit back with satisfaction at their handiwork.

If the American people continue to remain confused and befuddled by the rather poorly constructed propaganda narratives portrayed by Western media outlets and their writers who cannot even contain their emotions on social media, then Syria will undoubtedly be destroyed for good and the United States will be dragged into yet another war for empire in the Middle East.

Caruso and his colleagues, of course, will have the blood of innocent Syrians and American servicemen and women on their hands.

If State Department agents like Anne Marie Slaughter, aided by people like Caruso, have their way, then the United States will eventually be granted its confrontation with Russia. If this ever happens, then those left to pick up the pieces of the developed world will be forced to suffer the humiliation of remembering that utter destruction was brought to them not by brave warriors but instead by international bankers, pencil pushers, and pathetic hipsters.

Brandon Turbeville is an author out of Florence, South Carolina. He has a Bachelor's Degree from Francis Marion University and is the author of six books, Codex Alimentarius -- The End of Health Freedom, 7 Real Conspiracies, Five Sense Solutions and Dispatches From a Dissident, volume 1and volume 2, and The Road to Damascus: The Anglo-American Assault on Syria. Turbeville has published over 300 articles dealing on a wide variety of subjects including health, economics, government corruption, and civil liberties. Brandon Turbeville's podcast Truth on The Tracks can be found every Monday night 9 pm EST at UCYTV. He is available for radio and TV interviews. Please contact activistpost (at) gmail.com.
Posted by Admin at 4:42 PM