The Politics Of Division: Islamic Fundamentalism And Christian Jihad 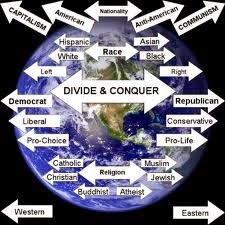 Thirteen years after 9/11, Western governments and their media mouthpieces are working in overdrive to create as much religious, ethnic, racial, and gender-based tension and division as possible. From Islamic fundamentalism, media-promoted racial violence, and the culture industry’s carefully crafted separation and division between men and women, the goal is to divide the American people and the people of the rest of the world into as many different sects and divisions as possible so that they project all of the wrongs they have suffered onto the backs of the “other” group they have been trained to see as their enemy.

The strategy is strikingly similar to that of the Brzezinski doctrine of Microstates and Mini-states, where previously united nations are reduced to petty impotent and squabbling pseudo-states incapable of standing up to any major government, corporation, or bank. Likewise, a planet of peoples who are incapable of viewing anything other than the convenient scapegoat given to them by the world oligarchy will be incapable of resisting the power and will of that oligarchy.

Case in point is the recent media reaction to Barack Obama’s tissue of lies also known as his address to the American people on September 10 regarding his strategy against the Islamic Fundamentalist organization ISIS.

During the course of Obama’s ridiculous assertions regarding the nature of ISIS made by virtue of omitting the fact that ISIS was entirely funded, directed, and trained by the United States and NATO, presenting Bashar al-Assad as the enemy of democracy and freedom, and claiming that such a thing as “moderate” Syrian rebels ever actually existed, Obama also made another statement about ISIS that received overwhelming attention from the mainstream media outlets that are tasked with diverting American attention away from any legitimate issues.

In his address, Obama stated that “Now let's make two things clear: ISIL is not "Islamic." No religion condones the killing of innocents, and the vast majority of ISIL's victims have been Muslim. And ISIL is certainly not a state.”


Immediately, the “conservative” media outlets such as FOX News and its cohort of clowns as well as many alternative media outlets seized on the statement to show that either Barack Obama is a Muslim (despite the fact that, even if it was true, it would not be a crime or cause for impeachment), or that Obama was merely being politically correct and refusing to address the real problem, i.e. Islam and Muslims.

Of course, Obama’s statement was nothing more than political language designed to provide the pretense of respect for Islam and the idea that there is, in reality, no war on the religion. Obama’s statement should be considered in the same league and taken as seriously as his other statements in his address like those suggesting that America is a democracy, American manufacturing is booming, and that businesses are operating at their highest levels in American history.

The answer is that the goal is to infuriate American conservatives, Christians, and Republicans. It is to stir the pot of a group of people who harbor a justifiable hatred of Obama and the direction of the country into hatred of another religion. In other words, it is to create division using Islam as the scapegoat.

Of course, ISIL is indeed a fanatic organization (created by the West) which uses Islam as the basis of its ideology, despite the fact that many of the actual killers do not understand basic concepts of their own professed religion.

Still, Obama’s statement was taken out of context. His claim was that ISIL did not represent the tenets of Islam as it is practiced and understood by Muslims across the world. That it is a minority of Muslims who have hijacked the religion for political purposes. This is true enough and Obama should know. These terrorists would never have been able to hijack the religion to this level if it were not for him and his mentor Zbigniew Brzezinksi.

Yet, while Conservatives went crazy with attacks against Obama’s statement, the truth is that George W. Bush made almost the same statement repeatedlyduring his own crusades in the Muslim world. One can scarcely remember a peep of criticism regarding his statement at that time.

So then one can only wonder what the solution desired by the critics of Obama’s statement actually is? If Obama’s statement is wrong and ISIL is indeed the true representation of Islam and if Muslims are truly the enemy, is the answer then more war? Is it a literal crusade against Muslims the world over? Is it a program of extermination of Muslims?

One can only surmise that this new version of Conservative and Christian Jihad can only lead to such polices.

Indeed, one can see this ideology rising in those who continually justify their assertions that Islam is the enemy by asking the question, “If Islam is truly the religion of peace, why aren’t the millions of allegedly peaceful Muslims speaking out against terror?”

Of course, the answer is that they have.

Muammar Ghaddaffi had opposed terror for decades and he was repaid by bombing, sodomy, and death. The people of Libya who wished to live in peace and fought against Western-backed terrorists are now subjected to a life of chaos and brutality the likes of which the West has not seen for many years.

Bashar al-Assad, the leading figure of opposition to terrorism has likewise been repaid with invasion, bombing, and chaos. The Syrian people, who overwhelmingly oppose extremism, have volunteered in droves to fight with the Syrian Army to destroy ISIS terrorists. In 2014, hundreds of thousands of Syrians have been killed and millions have been dislocated from their homes as a result of Western-backed terrorists.

Of utmost importance is the fact that the terrorists which American Conservatives and Christians are so afraid of are actually the creation of their own government, making their willingness to engage in war and other military options a cruel joke as they will eventually pay the ultimate price for their stupidity - after all, it is their children, too, who will be sent off to fight wars for the benefit of international bankers and geopolitical interests.

So the answer to the question of “If Islam is truly the religion of peace, why aren’t the millions of allegedly peaceful Muslims speaking out against terror?” is quite simple. They did. And you killed them.


Military Source: Troops On The Ground In Syria 'Absolutely Crucial' To Defeat ISIS

The Roots of ISIS


Brandon Turbeville is an author out of Florence, South Carolina. He has a Bachelor's Degree from Francis Marion University and is the author of six books, Codex Alimentarius -- The End of Health Freedom, 7 Real Conspiracies, Five Sense Solutions and Dispatches From a Dissident, volume 1and volume 2, and The Road to Damascus: The Anglo-American Assault on Syria. Turbeville has published over 300 articles dealing on a wide variety of subjects including health, economics, government corruption, and civil liberties. Brandon Turbeville's podcast Truth on The Tracks can be found every Monday night 9 pm EST at UCYTV. He is available for radio and TV interviews. Please contact activistpost (at) gmail.com.
Posted by Admin at 11:28 AM