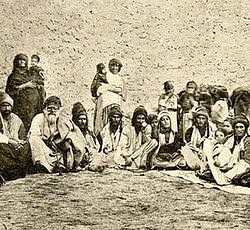 In a perfect example of how world events can be misconstrued in mainstream media outlets for propaganda purposes, recent reports regarding trapped Yazidis on Mt. Sinjar have been used as cover for the justification of an American bombing campaign in Iraq.

This tragedy, which is very real, has been presented to the American public as the reason that the U.S. military is engaging in “targeted airstrikes” in Iraq, despite the fact that the area where the airstrikes initially took place was Erbil, a “hub” for major international oil companies which is not “in the vicinity” of Mt. Sinjar.

Although some airstrikes did eventually take place near Mt. Sinjar, the truth is that the trapped Yazidis were used as an excuse for the American military to act as protection for oil fields and international oil interests.

Now, after reports have trickled in suggesting that conditions on the ground on Mt. Sinjar are “better than expected” and that many Yazidis have actually been able to escape the mountain to safer areas, the “rescue mission” that was in the works while oil interests were being secured is now being called off.

Of course, the mainstream Western press is attempting to paint the improved conditions on Mt. Sinjar as a success of the American military, U.S. Marines, and other related personnel. However, the fact is that the U.S. military personnel only ever engaged in air relief drops and“reconnaissance.”

The real heroes for the Mt. Sinjar Yazidis are not NATO military personnel, but Syrian Kurds. This is because groups of Syrian Kurdish fighters, upon learning of the fate of the people trapped on Mt. Sinjar, organized and battled through IS forces, militarily digging out a safe corridor by which to remove them from the mountain and give them safe passage into Syria or some other area.

In other words, while humanitarian air drops were in the process of being bungled by the West, Syrian Kurds entered Iraq in order to battle IS militants and carve out an escape route into safer territory.

As the Associated Press reported on August 12, “For the past few days, fighters have been rescuing Yazidis from the mountain, transporting them into Syrian territory to give them first aid, food and water, and returning some to Iraq via a pontoon bridge.”

Ismail Rashu, a Yazidi who had escaped to Kurdish Syria, stated “The (Kurdish fighters) opened a path for us. If they had not, we would still be stranded on the mountain.”

According to the United Nations, about 50,000 Yazidis had fled to Mt. Sinjar. By Sunday, however, around 45,000 of them had been rescued by the Syrian Kurdish forces. While thousands are still stranded on the mountain, it appears that help is indeed on the way – just not in the form of the American military and the U.S. Marine Corp.

In fact, the United States and its fellow NATO members are now abandoning a plan to “rescue” the trapped Yazidis as the majority have already been evacuated from the Mountain. The remaining people appear to be well on their way to relative safety.

According to the AP report,

Syrian Kurdish officials said soon after Yazidis fled their villages, they began fighting to create a safe passage. They clashed with Islamic State fighters upon entering Iraq, losing at least 9 fighters, but by Aug. 7 had secured a safe valley passage, cramming Yazidis into jeeps, trucks and cars to bring them some 25 miles (40 kilometers) away. Some of the ill were even rushed to hospital.
"We answered their cries for help. They were in danger and we opened a safe passage for them into safety," said military official Omar Ali. "We saw that we had to help them and protect them; they are Kurds and part of our nation."
While the vast majority of Americans who were casually paying attention to media reports regarding the trapped Yazidis will conclude that the victims were saved by the United States Marines and Western heroism, the fact is that the Syrian Kurdish forces, who are also locked in battle with Western-backed death squads in Syria, were the true heroes of this whole ordeal.

Without a doubt, it is important to remember that, if it were not for NATO and the United States, ISIS would never have been in Iraq to begin with and, thus, the Yazidis would never have suffered through this horrible affair.

Brandon Turbeville is an author out of Florence, South Carolina. He has a Bachelor's Degree from Francis Marion University and is the author of six books, Codex Alimentarius -- The End of Health Freedom, 7 Real Conspiracies, Five Sense Solutions and Dispatches From a Dissident, volume 1and volume 2, and The Road to Damascus: The Anglo-American Assault on Syria. Turbeville has published over 300 articles dealing on a wide variety of subjects including health, economics, government corruption, and civil liberties. Brandon Turbeville's podcast Truth on The Tracks can be found every Monday night 9 pm EST at UCYTV.  He is available for radio and TV interviews. Please contact activistpost (at) gmail.com.
Posted by Admin at 10:47 AM