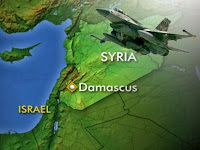 Update: RT is now reporting that an Obama administration official has confirmed to CNN that this was in fact an Israeli attack. There is still no comment from the Syrian or Israeli government. (Source)

On the heels of a reported chemical attack committed by the death squads on the Syria/Turkey border, a massive explosion has completely destroyed a Syrian air defense base in Snobar Jableh, Syria which is located near Latakia, a port city on the coast of the Mediterranean. Snobar Jableh is just south of Latakia.

The attacks allegedly were to have taken place on Wednesday night.

Al-Arabiya also claims that the target of the attacks were two shipments of SA-8 Surface-To-Air missiles slated for delivery to Hezbollah. The organization claims that the two targets were successfully destroyed.

Syrian news agency Dam Press is reporting that the facility was indeed heavily damaged but that there were no injuries. Business Insider claims that a Syrian security official has confirmed the attack.

However, Voice of Russia reports that Syria Special Services are denying the destruction of the base. VOA quotes a representative of Syrian intelligence services saying that “It is a lie and a provocation.”

The conflicting nature of the official responses could be attributed to the fact that, while the attack did indeed take place, the level of damage was not as severe as that claimed by death squads and Western/Israeli media outlets.

Nevertheless, the targets appear to have been relatively sophisticated missiles housed at the facility. As Yasser Okbi of Ynetnews writes,


Channel 2 News reported that the attack's target was a S-125 surface-to-air missiles battery.

Satellite images of the area obtained by Channel 2 show the Russian-made Neva missiles, as well as a SA-3 missile battery, that also includes a command center with a radar to track the missiles' targets and broadcasting anthenas to track the missiles as they are launched. The missiles have a range of 35km. and a 70k. warhead.

Lebanese media has reported that six planes belonging to the Israeli Air Force flew over Ayta Ash Shab, Bint Jbeil, and Marjayoun located in southern Lebanon during the night.

These reports appear to be based an official press release from the Lebanese military and assert that “the airplanes entered Lebanese airspace at around 1:40 P.M. and circled over various places before leaving over the Mediterranean Sea near Tripoli and Naqoura at 5 P.M.”

As Business Insider reports, eyewitnesses noticed an suspicious amount of aircraft activity shortly before the blast. As Michael Kelley writes,


"During the night, we noticed much aircraft activity," an eyewitness told a Lebanese Al-Mustaqbal news outlet. "At a certain point, we were woken up by the sound of blasts and we saw a large fire and many explosions at the agricultural institute. Military and security forces arrived at the scene, put out the flames, and closed off the entire area for kilometers."

In addition, reports are also suggesting that the missiles which hit the Syrian Air Defense facility came from the sea.

Yet, while claims over Israeli responsibility for the attack can, at this point, only be considered speculation, all evidence does seem to point in the direction of Israel. Indeed, the track record of the Israelis lends a great deal of credence to the charges.

It is important to remember that Israel has launched attacks against Syrian forces and military convoys on at least four different occasions during the course of the current crisis.

In addition, it is generally understood that Israel was responsible for an attack on a shipment of missiles that were on their way from Syria to Lebanon last week, although the exact location – whether on Syrian or Lebanese soil – is still uncertain.

Recently From Brandon Turbeville:
Brandon Turbeville is an author out of Florence, South Carolina. He has a Bachelor's Degree from Francis Marion University and is the author of six books, Codex Alimentarius -- The End of Health Freedom, 7 Real Conspiracies, Five Sense Solutions and Dispatches From a Dissident, volume 1 and volume 2, and The Road to Damascus: The Anglo-American Assault on Syria. Turbeville has published over 275 articles dealing on a wide variety of subjects including health, economics, government corruption, and civil liberties. Brandon Turbeville's podcast Truth on The Tracks can be found every Monday night 9 pm EST at UCYTV.  He is available for radio and TV interviews. Please contact activistpost (at) gmail.com.
Posted by Admin at 6:10 AM