The Paradox Of War In A 'Wonderful World' - Syria Continues To Fight, Live, And Love 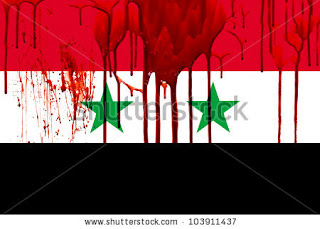 "Why Janice, why? Why are they doing this to us?"asked my dear friend, a Syrian mother whose son died in the Syrian Army fighting against terrorists. She has two other sons, both in the Army.

As we were speaking together a young lady approached us. She'd heard our conversation and wanted to share her story. She comes from a Christian village near Idlib which has been under constant threat and attack by terrorist groups directly supported by the US. I will be researching the tragedies suffered there to share in another post.

Also there was another young lady celebrating her 22nd birthday. My friend and I offered her congratulations and then shared her birthday cake. She also came over for a chat. She studies in university in Lebanon but asked as her birthday gift to come back to Damascus where she hadn't been since before the war.

"Why now?" I asked though I knew the answer. Because the mortars and rockets, car and suicide bombs, kidnappings etc have stopped since the victories over the terrorist groups in eastern Ghouta/Douma.

Terrorist groups, yes again, called "moderates" and directly supported by the US and allies.

For seven years Damascus has been so terribly dangerous when before the war Syria was the fifth safest country in the world according to Gallup polls.

Obama's "moderates" from the very beginning rampaged through the beautiful city. Gangs kidnapped people at random for money. The US backed Free Syrian Army would just go into people's homes and at gunpoint force them to leave then took up residence. They in turn would often get forced out by the Syrian Army but the fleeing terrorists would first plant booby trap bombs in refrigerators and other items in hopes to massacre the returning home owners. Suicide and car bombings were common like the shrapnel-filled mortars and rockets that hit the city routinely.

All of it knowingly supported and sponsored by the United States of America with their terrorist allies of Saudi Arabia, Qatar, and Turkey.

And now Damascus is safe again. But President Assad and the Army of Syria are the "bad guys" according to western governments and media for fighting the monsters who did it all.

I'll be honest with you, the people here don't give a flying fart what the western governments and media say. They know the truth; they've lived it.

But really when it comes right down to it, there are terrible, evil, greedy people just as there have always been throughout history everywhere. And right now, the worst of them control America behind the scenes and have been for quite awhile. Both parties.

Why do some people love death and destruction and money and power so much?

I don't know and the sadness can crush your spirit if you let it.

But last night, at a local bar with another dear friend, many people were out enjoying the evening including a table full of beautiful young ladies laughing and relaxing.

The owner of this great new bar had opened it as some of the worst shelling by terrorists was happening just a few months ago. I was shocked he could do it! He explained it was his act of resistance against their violence.

And Louis Armstrong's What a Wonderful World was playing - and it was wonderful.”


Janice Kortkamp is a pro-Syrian activist who has traveled to Syria on several occasions to witness the situation firsthand. She has long opposed the U.S. war on Syria and given a number of lectures on the topic. She is an occasional contributor to BrandonTurbeville.com
Posted by Admin at 10:54 AM