After Trying To Destroy Civilization In The Middle East, Who Could Vote For Hillary Clinton? 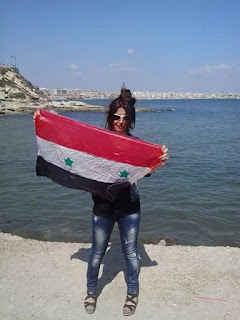 As a Lattakian resident, I wake up every day to this beautiful land and walk the streets of this city which is on the Meditteranean coast. Latakia was deeply affected by the Western/GCC proxy war against Syria as was every city in the country.

As a result, most of our men joined the Syrian military in order to defend our homeland.

This city, which used to attract tourists from all over the world, drawn by its beauty and its archeological sites, has now been forced to call its sons and daughters to defend it against foreign fighters who have come from over 83 countries to destroy it. These fighters are Chechen, Turkmen, Uighur, Tunisian, African, Saudi, and Qatari. They were called “moderate rebels” by the West and its allies as well as the Western media.

Of course, we cannot forget that Turkey open its borders to every jihadi fighter who wanted to invade Syrian land.

We have suffered just like every other city from the crimes of the Western proxies. From genocide to rape and constant missiles, life is nothing like it was before 2011.

While our city was considered peaceful compared to other cities like Aleppo, Deir al-Zour, or even Homs, wherever the “moderate” terrorists of the west succeeded in controlling parts of it, our people were terrorized and slaughtered.


With all of these hardships, however, Syrians here, as everywhere else in the country, have a will to go on living and that is what we have done. The death squads have not stopped our way of life.

Our streets are full of people in the markets and the gardens. We are still here. We refuse to die under our beds!

Our city deserves your attention. All of Syria does. While the warmonger Hillary Clinton, who admitted that the U.S. created al-Qaeda in Afghanistan, and who wanted the people in Syria to kill and be killed, this warmongering woman has made it a priority that, if she wins, she is going to topple our beloved President, as if we have no right to decide our own fate, to elect our own government, and continue life in peace as the rest of the people of the world.

Furthermore, she insists on supplying more and more weapons to those war criminals to be used against the Syrian people.

Who would vote for this horrible woman? Who could admire her dirty role in the tragedy of Libya, Iraq, and so many others?


Afraa Dagher is a political analyst currently residing in Syria. She has made numerous media appearances commenting on the current state of affairs inside Syria as well as the nature of the current crisis. She has appeared on RT, PRESS TV, and is a regular guest on Activist Post writer Brandon Turbeville’s Truth on the Tracks radio program. Her website is www.SyrianaAfrona.wordpress.com.
Posted by Admin at 5:43 PM