'Moderate' Terrorists Behead Child On Camera: Paid For By The American Taxpayer 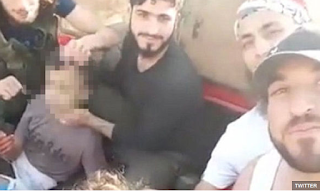 As the United States and the Western world continue to harp on the unproven allegations of Assad’s alleged “crimes against humanity” and claims that have never had one shred of evidence behind them in regards to his supposed “killing his own people,” the U.S.-backed “moderate” rebels are beheading children in front of the video camera for all to see.

Always known for their brutality and inhumanity to innocent men, women, and children, America’s “rebels” have now sunk to a new low with the beheading of a child (under the age of 12) they had accused of fighting alongside the Liwaa al-Quds (Quds Brigade), a Palestinian militia fighting alongside the Syrian government.

The video, which was recorded by the terrorists of Nour al-Din al-Zinki, an American-backed “rebel” group, shows the child in ragged clothes sitting in the back of a pickup truck surrounded by five bearded terrorists. The child is then laid on his stomach and his hands tied behind his back. After a short intro speech by the executioner, the child’s head is then lifted up and the executioner begins sawing with a small and, apparently, dull knife through the child’s neck. After a few muffled attempts at screaming, the knife having severed the vocal chords early enough to prevent most of that, the executioner holds the child’s head above his own and utters the familiar cry of “Allahu Akbar!” At this point, his chanting friends, more akin to a pack of crazed apes more than anything resembling human, begin repeating the chant and holding their hands in the air, celebrating their kill.


In the video, it should be noted that the terrorist says “We will leave no one in Handarat,” an open admission of the intent and purpose of committing an act of genocide.

The Jerusalem Brigade (al-Quds Brigade) released a statement saying that the boy was not a fighter with the brigade and identified him as Abdullah Issa.

"He lived in al-Mashhad [Aleppo] with his family, among multiple poor families that live in the area under the control of terrorists," said al-Quds, adding that the boy was ill. "By taking one glance at the child - the argument that he was a fighter is immediately disapproved.”

Meanwhile, the United States continues its funding to the so-called “rebels” amid yet another horrific atrocity while claiming moral high ground over Assad despite the fact that the U.S. has yet to produce a shred of evidence to show that he or his forces have ever committed attacks, much less atrocities, on civilians.

State Department Spokesman Mark Toner responded to the reports saying, “If we can prove that this was indeed what happened and this group was involved in it, I think it would certainly give us pause." Of course, there is video evidence of the crime if Toner is interested. In addition, for most people, although admittedly not for the U.S. government, the beheading of a child is reason enough to do more than simply pause. Nevertheless, we expect the United States to continue supporting their terrorist proxies to the fullest extent possible until their goal of destroying the secular government of Bashar al-Assad is accomplished or until the plan is stopped by other actors.

America’s terrorists in Syria have long been known for killing children. In addition to murdering them in the general indiscriminate attacks and regular acts of genocide, these so-called rebels have been implicated in the hanging of small children as well as the execution of teens for making simple comments construed as being “insulting to the prophet.”

Brandon Turbeville is a writer out of Florence, South Carolina. He is the author of seven books, The Road To Damascus- The Anglo-American Assault on Syria, Codex Alimentarius- The End of Health Freedom, Seven Real Conspiracies, Five Sense Solutions, The Difference It Makes: 36 Reasons Hillary Clinton Should Never Be President, and Dispatches From A Dissident Vol. 1 and 2. He is a staff writer for Activist Post and has published over 800 hundred articles dealing with a wide variety of subjects including health, economics, war, government corruption, and civil liberties. He has been a guest on numerous alternative media broadcasts as well as mainstream outlets. Turbeville is also an occasional contributor to other media outlets such as Natural Blaze, The Anti Media, and Progressive Gazette, Era Of Wisdom, and Off Rail Alliance. His books can be found in the bookstore at BrandonTurbeville.com, www.FalseFlagPublications.blogspot.com, TheBookPatch.com, and Amazon.com.

Turbeville is also a the host of Truth on the Tracks, a weekly news round up that serves as a hub for activists, information, and solutions. Truth on the Tracks airs every Monday and Friday night at 9pm EST on UCY.TV/TT.
Posted by Admin at 4:02 PM