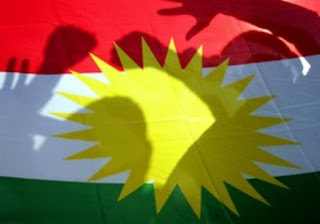 Shortly before calling a NATO meeting under the pretense of concerns over its security, Turkey launched a bombing campaign across the border into Syria allegedly against the ISIS forces that it has supported, trained, and facilitated since the beginning of the Syrian crisis.

Very soon after the bombing campaign was launched there came the announcement that Turkey and the United States had agreed to implement an “ISIL Free Zone” otherwise known as a “No Fly Zone” in northern Syria.

Thus, as Turkey whines about the threat ISIS poses to its security, fresh on the heels of a dubious ISIS bombing of a political demonstration, Turkey has demonstrated that the real targets of its bombing campaign is not ISIS at all, it is the Kurds.

Since the 1980s, Turkey has been locked in a political and sometimes bloody military struggle with the Kurds inside its own borders. Turkish Kurds have provided political, military, and demonstrative opposition to the power structure inside Turkey for some time – at times calling for more rights and at other times calling for autonomy and even outright independence.


Turkey has resisted any calls for Kurdish independence or the creation of a Kurdistan. However, both sides were able to reach a peace deal and lives on both sides of the border were able to return to relative normalcy after the Kurds declared a unilateral ceasefire in 1999. The ceasefire lasted until 2004 when sporadic fighting began erupting yet again and the conflict was becoming increasingly physical. Peace largely returned in 2013 but Erdogan and his support for savages and terrorists strained the relationship until, very recently, violence once again began to flare.

There are two very important reasons why Turkey is so obsessed with the Kurds within its own borders and those within the borders of Syria and Iraq.

First is the question of Kurdistan. The creation of an independent country for the Kurds is beyond question for Turkey, particularly for the nitwit Erdogan who apparently has delusions of grandeur so great that he believes he will eventually be the head of the new Ottoman empire. Of course, Erdogan is wrong and it is precisely his miscalculations that are much of the reason why his own country is imploding from east to west and on virtually every level of society.

In addition to the Turkish Kurds (PKK), the Kurds in Iraq (KDP, PUK, Peshmerga) and Syria (YPG) are also partial to autonomy and even independence. They are also aligned with the PKK in Turkey, with the PKK maintaining some bases of operations inside Iraq. The Syrian crisis, facilitated and worsened by the Turks themselves via their support for ISIS, has threatened to destabilize Turkey as well, a potential outcome that Erdogan should have seen coming from a mile away.

The Syrian crisis has not only affected Syrian Kurds and forced them to become an effective military fighting force, it has also forced Iraqi Kurds to do the same. Thus, with two of the four elements of Kurdish society now organized, trained, and fighting, it was always a risk that the Kurds in Turkey would become emboldened and seek independence or autonomy for themselves. All that would need to happen would be for the Turkish, Iraqi, and Syrian Kurds to begin coordination and cooperation for a de facto Kurdistan to be created.

Given the savage nature of Western-backed terrorists and their cross-border locations, it was a necessity for Iraqi and Syrian Kurds to communicate, a relatively easy task and one which Turkish Kurds began to take part in as well. The essential unification of three Kurdish factions in terms of communication, coordination, military operations and other methods of cooperation is simply too much for Erdogan and his delusions to bear.

In Erdogan and imperial Turkey’s mind, if the Kurds united at an opportune time where the Iraqi and Syrian military were not available to put a rebellion down – separated from the Kurds by ISIS – then Turkey would be faced with a de facto Kurdistan that may well develop into a real Kurdistan. Ironically, that concern may manifest itself because of Erdogan and Turkish imperialism and not because of the Kurds.

The second reason that Turkey is so adamant in its bombing campaign is the need to protect its terrorist proxies who have been devastated by the Kurds in recent months. While much of the northern part of Syria has been cut off from the Syrian military presence due to the fact that the Turkish border was one massive conduit of terrorists and, therefore, the terrorist presence was much more entrenched in those areas, the Kurds have fought long and hard to retake and secure areas on the border.

As Karl Vick of TIME Magazine wrote in the article “Kurds Are Building A Country With Every Victory Over ISIS,”


The recent run of victories in Syria illustrates the Kurds’ battlefield capabilities. Six months after winning in Kobani, the Turkish border town where as many as 1,000 ISIS fighters died, Syrian Kurd fighters on June 15 took another border town, Tel Abyad, creating a corridor on Syria’s northern border and—far more important—cutting off the main supply line to Raqqah, ISIS’s capital 60 miles due south. On Tuesday, the Kurd forces—a Syrian affiliate of the Kurdistan Worker’s Party, or PKK—seized a military base known as Brigade 93, as well as the town adjoining it, Ain Issa. The victories put them within 30 miles of Raqqah.

Yet, for all the complaining Turkey may make in the international press, the truth is that the Turkish government does not want to destroy ISIS – it wants to destroy the Kurds. After all, ISIS is the terrorist proxy force of the United States, Turkey, and NATO. ISIS represents the frontal assault against Assad that still allows the NATO powers to “lead from behind.” In the meantime, ISIS only represents the occasional threat to Turkey in the occasional instance when one of its fighters inches off the reservation to commit a suicide bombing or beheading.

Still it is important to observe the writing of Karl Vick, who points out the Kurdish victories in Syria as of late. Why would Turkey now decide to bomb the Kurds who have dealt such heavy blows to ISIS over the last few months? The answer is simple – to protect ISIS and reopen its supply lines. Those supply lines, it should also be noted, come directly from Turkey.

Notice also, when looking at a map of the Syrian-Turkish border, the location where the recently declared “ISIL-Free Zone” aka a “No-Fly Zone” will be declared.


The Kurds have seized and now maintain control of an area that spans the Turkey-Syria border from its western to eastern extremities all except for one small pocket in the middle – from Jarablus in the East to Dabiq in the West. This zone is about the exact dimensions of the ISIS supply lines coming in from Turkey to Syria and, if either the Syrian military or the Kurds were able to capture this small section of land on the border, ISIS supply lines would be entirely cut from the North. With Assad’s forces tightening their grip in the South and Southwestern portions of the country and the SAA/Hezbollah forces cracking down on any ISIS movements on the Syria-Lebanon border, ISIS would essentially be cut off from most avenues of outside assistance.

It is for this reason that Turkey has announced such a heavy bombing campaign against the Kurds, alongside an alleged campaign against Assad, the latter campaign being one that is questionable to say the least. Remember, the American airstrikes against ISIS have largely targeted Syrian infrastructure and civilian areas. In those areas where ISIS has been struck, it has been nothing more than an exercise in death squad herding.

The “ISIL-Free Zone” should be renamed the “ISIL Free Range Zone” since it is nothing more than a hedge of protection set up over the terrorists with the United States and Turkey once again acting as the ISIS Air Force. This zone, now under the protection of NATO forces will then be used as a Forward Operating Base for terrorism deeper inside the country as Turkey unilaterally bombs the Kurds away from territory they currently hold.

As usual, the beneficiaries will be ISIS and the NATO governments that fund them. The people of these Western countries will benefit nothing as is always the case with foreign adventures. They will, however, be presented with the bill. As the Anglo-American war feast continues, the Syrian people, unfortunately, are the appetizers.

Recently from Brandon Turbeville:
Brandon Turbeville is an author out of Florence, South Carolina. He has a Bachelor's Degree from Francis Marion University and is the author of six books, Codex Alimentarius -- The End of Health Freedom, 7 Real Conspiracies, Five Sense Solutions and Dispatches From a Dissident, volume 1 and volume 2, and The Road to Damascus: The Anglo-American Assault on Syria. Turbeville has published over 500 articles dealing on a wide variety of subjects including health, economics, government corruption, and civil liberties. Brandon Turbeville's podcast Truth on The Tracks can be found every Monday night 9 pm EST at UCYTV.  He is available for radio and TV interviews. Please contact activistpost (at) gmail.com.
Posted by Admin at 8:33 AM