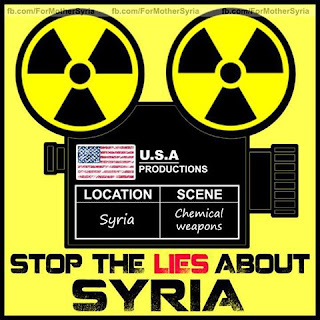 Despite the fact that both John Kerry and the US State Department have been repeatedly disproven over their claims that the Syrian government is using chemical weapons against civilians and terrorists in Syria, John Kerry appeared via video from Boston to announce that he has proof that the Syrian government has done just that. He also indicated that the US government is “compiling” that evidence to be presented at a later date.

“I am absolutely certain, we are certain that the preponderance of those attacks have been carried out by the regime,” Kerry said. He also claimed that “It has been significantly documented; it’s dropped from airplane. The opposition isn’t flying airplanes or helicopters.”

Obviously, facts have never gotten in the way of a good story for the State Department or for John Kerry and they certainly did not do so this time around. Kerry knows full well the Syrian government has not used chemical weapons against civilians or terrorists. Either that or the damage to his leg has metastasized to his brain.

This is because ALL of the chemical weapons attacks that have taken place in Syria have either been proven to have been conducted by the Western-backed death squads or, at the very least in these instances, the overwhelming majority of evidence available points to the “rebels” as the guilty party.


Kerry’s claim about the use of helicopters and planes is likewise proof that, in the absence of evidence, a lie will do.

First, the Syrian government is not the only force in the region flying airplanes or helicopters as Kerry, the State Department, and the Western mainstream press has suggested. Turkey, Israel, and even the United States itself are operating aircraft in Syrian airspace. So the mere idea that death squads are not operating aircraft does not prove they are not responsible for the chlorine bombs.

In fact, the idea that the death squads are not operating aircraft in Syria has been called in to question by the United States itself when it was reported that ISIS has come in to the possession of Syrian fighter jets and was allegedly videotaped flying them. Of course, this claim surfaced at a convenient time for NATO to push a “No-Fly Zone.” It is considered irrelevant now that the propaganda narrative is focusing somewhere else.

Furthermore, the idea of dropping chlorine-based barrel bombs is one that renders any use of chlorine much less effective as a weapon than if it were used without the barrel bomb. This is because chlorine is more effective the more closed off the target is. The more “open air” it encounters, the less the effect since chlorine forms droplets and dissipates rather quickly. Indeed, the concept of dropping a barrel bomb into a closed area is a contradiction.

Secondly, in a massive blast such as that would be encountered with a barrel bomb, much of what the chlorine would have reached would have been destroyed and killed by the bomb itself.

Kerry’s intention of “compiling evidence” should thus be read as an intention to build up a case of falsehoods and a tissue of lies against the Syrian government for the purpose of driving up enough support to allow for the invasion of Syria by NATO forces. Kerry has never produced a shred of evidence to back anything he has claimed regarding Syria and he will likely never do so in the future. Kerry and his entire pathetic State Department is nothing more than a grouping of psychopaths, sycophants, and habitual liars.

Kerry’s evidence will thus be a litany of stupidity, lies, and propaganda. The subsequent invasion will turn up as many chemical weapons as the Iraq invasion turned up Weapons of Mass Destruction.

Recently from Brandon Turbeville:
Brandon Turbeville is an author out of Florence, South Carolina. He has a Bachelor's Degree from Francis Marion University and is the author of six books, Codex Alimentarius -- The End of Health Freedom, 7 Real Conspiracies, Five Sense Solutions and Dispatches From a Dissident, volume 1 and volume 2, and The Road to Damascus: The Anglo-American Assault on Syria. Turbeville has published over 500 articles dealing on a wide variety of subjects including health, economics, government corruption, and civil liberties. Brandon Turbeville's podcast Truth on The Tracks can be found every Monday night 9 pm EST at UCYTV.  He is available for radio and TV interviews. Please contact activistpost (at) gmail.com.
Posted by Admin at 4:38 PM