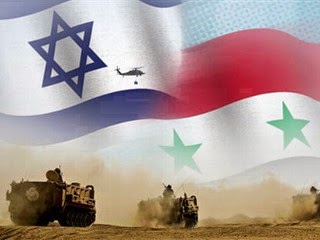 
Ever since the Western-backed attack on the secular government of Bashar al-Assad began in earnest in late 2010, Israel had been clearly implicated in providing assistance to the fundamentalist death squad organizations running rampant across Syria. This aid was provided despite an alleged mutual hatred between the Zionist settler state and Islamic fundamentalists.

As the crisis continued to unfold, Israel’s connections to the terrorists (backed by NATO and the GCC) began to grow more and more apparent.

Now, a recent series of reports (March 2013 – November 2014) released by the United Nations observers in the Golan Heights and submitted to the United Nations Security Council apparently corroborates those connections. Indeed, the reports claim that, at least for the past 18 months, the Israel Defense Forces have been in regular contact with “Syrian rebels,” including members of the Islamic State.

According to Israeli news agency Haaretz, the UN reports detailed several instances where close ties between the Syrian death squads and the Israeli military have been demonstrated.

As the International Business Times writes,

According to the UN reports, a person wounded on 15 September "was taken by armed members of the opposition across the ceasefire line, where he was transferred to a civilian ambulance escorted by an IDF vehicle."

Moreover, from 9-19 November, the "UNDOF observed at least 10 wounded persons being transferred by armed members of the opposition from the Bravo side across the ceasefire line to IDF."&

As per the details released by the Israel's health ministry, so far some 1,000 Syrians have been treated in four Israeli hospitals. Besides the civilians, some are members of the secular Free Syrian Army rebel group.

Although initially claiming that it only treated civilians, Israel was forced to walk back from those claims somewhat after the release of the UN report. When asked by i24news whether or not Israel had treated members of ISIS or al-Nusra, an Israeli spokesman stated “In the past two years the Israel Defence Forces have been engaged in humanitarian, life-saving aid to wounded Syrians, irrespective of their identity."


Of course, the assistance provided by Israel to the death squads was not isolated to mere medical treatment according to the report. As Haaretz reports,

Observers remarked in the report distributed on June 10 that they identified IDF soldiers on the Israeli side handing over two boxes to armed Syrian opposition members on the Syrian side.

The last report distributed to Security Council members, on December 1, described another meeting between IDF soldiers and Syrian opposition members that two UN representatives witnessed on October 27 some three kilometers east of Moshav Yonatan. The observers said they saw two IDF soldiers on the eastern side of the border fence opening the gate and letting two people enter Israel. The report, contrary to previous ones, did not note that the two exiting Syria were injured or why they entered Israel.

This specific event is of particular interest in light of what happened on the Syrian side of the border in the exact same region. According to the report, UN observers stated that tents were set up about 300 meters from the Israeli position for some 70 families of Syrian deserters. The Syrian army sent a letter of complaint to UNDOF in September, claiming this tent camp was a base for “armed terrorists” crossing the border into Israel.

Of course, it has been well known for quite some time that Israel has been providing wounded Syrian rebels with medical treatment inside Israel so that they can continue the Jihad against the secular government of Bashar al-Assad. According to Colum Lynch of The Cable (the news wing of the Council on Foreign Relations Foreign Policy),

In the past three months [April-June 2014], battle-hardened Syrian rebels have transported scores of wounded Syrians across a cease-fire line that has separated Israel from Syria since 1974, according to a 15-page report by U.N. Secretary-General Ban Ki-moon on the work of the U.N. Disengagement Observer Force (UNDOF). Once in Israel, they receive medical treatment in a field clinic before being sent back to Syria, where, presumably, some will return to carry on the fight.

U.N. blue helmets responsible for monitoring the decades-old cease-fire report observing armed opposition groups "transferring 89 wounded persons" from Syrian territory into Israel, where they were received by members of the Israel Defense Forces, according to the report. The IDF returned 21 Syrians to armed opposition members back in Syria, including the bodies of two who died.


Later in the article, the writer mentions the fact that Israel has provided such medical assistance to Syrian rebels since at least as far back as February 2014. Realistically, however, such assistance was being provided even further back. Lynch writes that Israel provided the medical treatment for at least a year even at the time of the writing of his article, i.e. as far back as at least June 2013.


Even more telling is that, in February, 2014, Prime Minister Benjamin Netanyahu actually visited one of the medical facilities in which the Syrian rebels were being treated and even posed for a photo op shaking hands with a death squad fighter.

While the connections between Israel and Islamic terrorism, particularly the terrorists wreaking havoc across Syria, is by no means a new revelation, it is becoming much harder for the settler state to hide its complicity as well as its direct involvement in the funding, directing, arming, training, and control of terrorism across the Middle East including such terrorism within its own borders.

Brandon Turbeville is an author out of Florence, South Carolina. He has a Bachelor's Degree from Francis Marion University and is the author of six books, Codex Alimentarius -- The End of Health Freedom, 7 Real Conspiracies, Five Sense Solutions and Dispatches From a Dissident, volume 1and volume 2, and The Road to Damascus: The Anglo-American Assault on Syria. Turbeville has published over 300 articles dealing on a wide variety of subjects including health, economics, government corruption, and civil liberties. Brandon Turbeville's podcast Truth on The Tracks can be found every Monday night 9 pm EST at UCYTV. He is available for radio and TV interviews. Please contact activistpost (at) gmail.com.
Posted by Admin at 8:01 AM