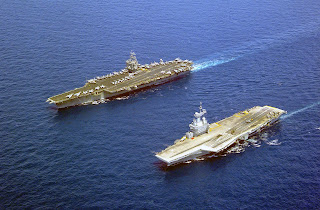 
While certainly not conclusive evidence that the attack on Charlie Hebdo was an “inside job,” it is without a doubt very questionable that the French military announced that it will be sending an aircraft carrier to the Gulf for the alleged purpose of “fighting ISIS” the day before the barbaric terror attacks against controversial French magazine.

While the two events may indeed be unrelated, such brazen attacks inside France will undoubtedly serve to drum up even more support for French military action in the Middle East. The fact that the military action was announced a full day before the attacks took place will be no matter to the few members of the general public who discover it, as support for retribution and retaliation will be given for military action retroactively.

The deployment of the marine battle group is due to be announced by President Francois Hollande when he gives his annual new year’s speech to the armed forces onboard the Charles de Gaulle on January 14, according to the “Mer et Marine” news site.

The Elysee Palace confirmed to AFP that the carrier would travel to the Gulf on its way to India, where it is due to take part in exercises in mid-April.

“The Charles de Gaulle will be available to participate, if necessary, in all operational missions”, the Elysee spokesman said.

According to Mer et Marine, the Charles de Gaulle carrier will travel to the Gulf with its fleet of air and naval craft, including Rafale and Super Etendard fighter jets and an attack submarine, to take part in the US-led bombing campaign against IS forces in Iraq.

Interestingly enough, the suspects in the attack are two French citizens of Algerian decent who were recruited for and trained in the battlefields of Iraq and Syria. These individuals are thus recipients of French, NATO, and American support, aid, weapons, training, and ultimately outright directives in their use as a proxy army against the secular government of Bashar al-Assad.

This should come as no surprise to those who study the nature of color revolutions and, more specifically, the use of terrorist organizations by national governments for political purposes.

After all, it should be remembered that, when the French people and even some French parliamentarians were hesitant to engage in military action in Iraq, ISIS released a video of an alleged beheading of a Frenchman, which provided justification for French involvement. This was the third video in a series that prompted justification for action from each of the “target” countries.

As Tony Cartalucci of Land Destroyer Report writes in his own article, “France Armed Terrorists That Struck Paris,”

France, as part of a NATO-led coalition, has been arming, funding, aiding, and otherwise perpetuating Al Qaeda terrorists for years, beginning, on record in Libya with the overthrow of Libyan leader Muammar Gaddafi and continuing until today with NATO's arming, harboring, and backing of Al Qaeda terrorists including the so-called "Islamic State" (ISIS) within and along Syria's borders.

With the recent attack in Paris likely the work of the very terrorists France has been arming and backing across North Africa and the Middle East, the French government itself stands responsible, guilty of the continued material support of a terrorist organization that has now killed French citizens, including two police officers, not only on French soil, but within the French capital itself.

Given the fact that ISIS, al-Qaeda, and related organizations are entirely controlled by Western intelligence agencies, one must question the real reason that Charlie Hebdo was attacked and the true command-and-control structure that exists behind the attackers.

Brandon Turbeville is an author out of Florence, South Carolina. He has a Bachelor's Degree from Francis Marion University and is the author of six books, Codex Alimentarius -- The End of Health Freedom, 7 Real Conspiracies, Five Sense Solutions and Dispatches From a Dissident, volume 1and volume 2, and The Road to Damascus: The Anglo-American Assault on Syria. Turbeville has published over 300 articles dealing on a wide variety of subjects including health, economics, government corruption, and civil liberties. Brandon Turbeville's podcast Truth on The Tracks can be found every Monday night 9 pm EST at UCYTV. He is available for radio and TV interviews. Please contact activistpost (at) gmail.com.
Posted by Admin at 8:30 AM