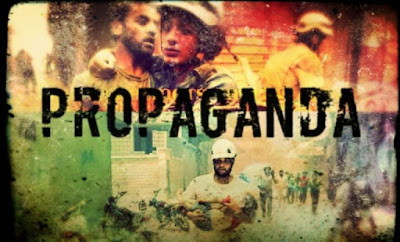 Ever since the beginning of the Syrian crisis in 2011, the Western mainstream media, along with its counterparts in the Gulf countries, have engaged in the most heinous acts of war propaganda seen in the modern world. Not content with the opportunity to twist facts and distort the realities on the ground, these mainstream corporate news engines have outright colluded in faking reports and concocting entire productions of propaganda for the purpose of convincing their audiences of the need to invade Syria or, at the very least, to support the terrorists "rebels," armed, funded, and trained by the U.S., NATO, Israel, and the Gulf states.

A myriad of articles and videos have been written and made regarding the incidents staged by corporate media outlets in order to push war against Syria as well as a host of other target nations. However, a recent documentary made by Syrian investigative journalist Rafiq Lutf, with the assistance of journalist Vanessa Beeley, entitled The Veto, has chronicled a number of examples of these fabricated instances along with documented first hand proof of their fabrication.

As Beeley herself stated,

I met journalist and friend Rafiq Lutf and cameraman Abdul-Mun’aim Arnous in January 2018 and I was honoured when Rafiq asked me to work with him on his film project, The Veto. As Dr Shaaban said to me in August 2016, “Western propaganda is paid for in Syrian blood”. This is true. The horrifying bloodshed and loss of life in Syria could never have happened without the colonial media manufacturing consent for another illegal war against a Sovereign nation.

The Veto tracks the evolution of the propaganda campaign waged by Western media against Syria. From Baba Amr in Homs 2011/2012 until the modern day “propaganda construct” – the NATO-member-state funded White Helmets.


George Orwell said ““The most effective way to destroy people is to deny and obliterate their own understanding of their history.” Western media has been tasked with writing the history of the Syrian conflict to serve the aggressors in the US Coalition of terrorism.
As Dr Shaaban also told me: “The US alliance and its media are focusing on our history, material history, cultural history, identity, our army. Any power that keeps you as an entire state, or any statesman that represents strength or unity will be demonized and destroyed.”

The Veto exposes the criminal intentions of Western media and it archives the progression of the propaganda war waged by the West against Syria. Syrians are writing the history of the Syrian conflict because Syria and her allies have courageously resisted the Imperialist machine. As Rafiq has said so eloquently “ we are the Veto” and we must use it against the Industrial Media Complex in the West.

Syria’s history belongs to the Syrians and Syria’s final victory must ensure that Western media is never again given the power to destroy a nation, divide its people and promote international terrorism both military and economic.

The Veto is an important documentary now more than ever if nothing more than as an attempt to awaken Western audiences to the fact that their media has ceased even the pretense of journalism and is now nothing more than a monolithic intense propaganda factory designed to manipulate both their opinions and their morality.

Brandon Turbeville writes for Activist Post – article archive here – He is the author of seven books,Codex Alimentarius — The End of Health Freedom, 7 Real Conspiracies, Five Sense Solutions andDispatches From a Dissident, volume 1 and volume 2, The Road to Damascus: The Anglo-American Assault on Syria, The Difference it Makes: 36 Reasons Why Hillary Clinton Should Never Be President, and Resisting The Empire: The Plan To Destroy Syria And How The Future Of The World Depends On The Outcome. Turbeville has published over 1500 articles on a wide variety of subjects including health, economics, government corruption, civil liberties and, most notably, geopolitics and the Syrian crisis. His most recent release is a book of poetry, Dance, Amputee. Brandon Turbeville’s radio show Truth on The Tracks can be found at UCYTV. His website is BrandonTurbeville.com. He is available for radio and TV interviews. Please contact activistpost (at) gmail.com.