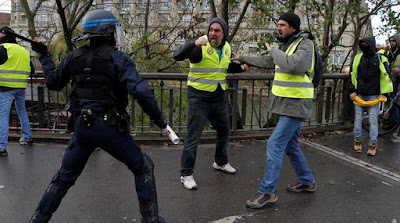 After weeks of massive protests taking place in France, one thing is clear; the French people have had it with the current regime. After decades of oppression by an increasingly out of touch elite, economic stagnation, a repressive police state, and now rising fuel prices, the French people are finally standing up and demanding that the status quo give way to the ever burgeoning concept of democracy.

Almost as soon as the protests began, the Macron regime launched a brutal crackdown on protesters, even going so far as to use chemical weapons against unarmed people in their attempt to stifle the sparks of democracy. Hundreds of innocent people have been injured at the hands of the regime’s security forces. Dozens of arrests have also been made with victims presumably being taken to Macron’s torture chambers.

The recent Macron regime attempt to raise fuel prices yet again seems to be the straw that broke the camel’s back and, combined with images of Macron jetting across the world, eating decadent meals, and parading himself in his life of luxury, the distance between the regime and the people has been demonstrated for all to see.

But raising fuel taxes is only one of many crimes of the regime against the French people. Willful shipping of French industry to third world countries has left many French people unemployed while the regime continues to confiscate the wealth of those fortunate enough to have work through exorbitant taxation. In addition, the regime crushes any dissent without hesitation after having disarmed the population in order to make resistance even less of a possibility. Free speech and even free thought does not exist in France where the regime punishes questioning state narratives with jail time and any political opposition figures are forced to undergo psychiatric evaluation.


In addition, while France’s economy lags and its people are oppressed, the regime has sent its military into numerous other countries like Niger, Libya, and Syria where chaos and untold amounts of bloodshed has ensued.

Unfortunately, the United States, Britain, Germany and virtually the entirety of the Western world continue to stand by the French dictator even as his security forces launch a brutal crackdown on peaceful protesters.

With the Western world taking no action to defend the people of France and with Russia busy meddling in elections, persecuting Hillary Clinton, and “invading” “good” countries, we have no other choice than to call on President Bashar al-Assad to do the only thing possible to defend the French people and the dying embers of democracy.

We understand the temptation of appeasement and of turning a blind eye to the crimes against humanity taking place in France today and we are fully aware of the problems Syria is facing at home. However, the world looks to Syria as the only hope to defend innocent people in France. Syria must act where the rest of the world is unable or unwilling.

President Assad, after being mired in a foreign-backed war that has cost the lives over 400,000 people, shaken the country to its core, and created one of the greatest humanitarian catastrophes of the 21st Century, you know full well the difference arming “rebels” can make. For that reason, we are calling on you to immediately provide aid and arms to the protesters in France. Will it bring bloodshed? Yes. Will it cost the lives of innocent people? Yes. Will it be an immoral act of war? Also yes.

As a victim of international sanctions, you are too familiar with how such an embargo can drastically reduce the living standards of a nation’s people who had nothing to do with any disagreement between heads of state. You have suffered under Western sanctions for quite some time and you have watched millions of your neighbors starve as a result of the American sanctions in that country. Because you are aware of all of this, you must also be aware of how important it is for you to lead the charge on the world stage to impose economic sanctions on France immediately. If it means more pressure on Macron, then starving the French people is clearly worth it.

Because we all know how brutal the French regime is and how bitterly Macron will cling to power, it may be necessary to engage in limited airstrikes against Macron’s air force. This may trigger a full scale war, possibly even world war three. However, for reasons unexplained, it will be worth it. Yes, civilians will die. But you can prevent civilians from dying by killing them now, so Macron will have no one left to kill, thus further humiliating him in the eyes of his people and the world at large.

To be clear, we are not asking for Syrian boots on the ground. However, the establishment of “observation posts,” “air bases,” and “training locations” may become necessary in order to train “rebels” and conduct patrols as well as airstrikes against French civilian and military locations.

President Assad, the world is watching. You must stand tall in this dark hour and say “Never again!” You must stand for democracy and freedom. You must stay the course until Macron steps down and a political solution between the “rebels” you armed and the regime is reached.

Any protesters willing to clash with police or security forces are protesters worthy of being armed by a foreign power. Mr. President, the world is watching.

Obviously, this article is satire. This writer does not want Syria to become involved in France nor does he want to see any violence in Europe or elsewhere. He is, however, regretful that, in 2018, satire has to be routinely ruined by explanation.
Posted by Admin at 10:30 AM