Did This Scientist Just Discover How The Universe Works? 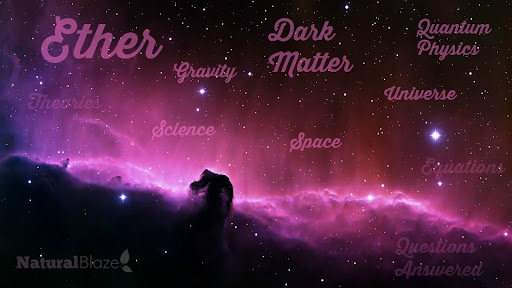 Throughout the history of modern physics, scientists have theorized about the existence of “dark energy” or “ether,” a substance that, if it exists, envelops and fills everything – all space and all reality. Ether has often been theorized to be the substance which is the conduit for the life giving force of the universe.

Yet physicists throughout the years have argued about this concept without ever reaching a consensus even regarding its existence, much less its makeup or nature. Those who argue in favor of the existence of this “ether” run into the problem of a lack of an ability to “quantize” it. Those who argue against it run into the problem of the conventional mainstream understanding of physics which is unable to account for many aspects of reality – both quantum and physical.

Long ago he (mankind) recognized that all perceptible matter comes from a primary substance, or tenuity beyond conception, filling all space, the Akasha or luminiferous ether, acted upon by the life giving Prana or creative force, calling into existence, in never ending cycles all things and phenomena. The primary substance, thrown into infinitesimal whirls of prodigious velocity, becomes gross matter; the force subsiding, the motion ceases and matter disappears, reverting to the primary substance.


If Philosopher, Chemist, and Biophysicist Francis V. Fernandes’ equations are correct, however, we may be at the cusp of a scientific breakthrough that will change the face of the world of physics and the world in which we live. This is because Fernandes claims that he has in fact quantized the mass of ether.

If Fernandes’ calculations are correct, this changes the entire ball game. He himself states that, once the mass of ether is known, solving a number of “unknowns” in the world of physics becomes relatively simple. The question of gravity, relativity, magnetism, and, indeed, energy itself becomes answerable.

For instance, the question of gravity and relativity, according to Fernandes, once the mass of ether is known, can itself be solved. Fernandes suggests the equation below does just that.

But what are the questions surrounding gravity and general relativity?

The Question At Hand

Marianne Freiberger, in her article “Problems Of Gravity,” sums up the lack of consensus on these principles by writing the following:

"General relativity correctly describes what we observe at the scale of the solar system," reassures Constantinos Skordis, of The Universities of Nottingham and Cyprus. "It all works beautifully at this scale and it has been tested." The problems arise when you look at the Universe at very small or at very large scales.

At the turn of the twentieth century people realised that at very small scales, in the realm of atomic and sub-atomic particles, the world looked very different from what they had expected. The theory of quantum mechanics grew out of that realisation and posed a new challenge: the descriptions of the fundamental forces of nature now had to be adapted to the new quantum mechanical insights — they had to quantised (see Schrödinger's equation — what is it? and Let me take you down cos we're going to .. quantum fields).
The problem is that general relativity stubbornly refuses to comply in this undertaking. "Einstein's theory cannot be easily quantised; we can't find a quantum counterpart in the same way as we found one for electromagnetism," explains Thomas Sotiriou of the University of Nottingham. In fact, the problem of finding a quantum theory of gravity is so challenging, and so important, many consider it the holy grail of modern physics.


Another mystery arises when you look at the Universe as a whole. Since 1929 physicists have known that the Universe is expanding, a fact that came as a shock even to Einstein: stars and galaxies are moving away from each other. Nearly 70 years later, in the 1990s, observations of far away objects also showed that this expansion is speeding up. General relativity cannot explain what causes this acceleration. If we believe the theory, then we must concede that there is something else out there, a mysterious form of energy which drives the acceleration. That something has been dubbed dark energy.

"Dark energy is bizarre," says Skordis. "It's not a particle, you can't detect it in the lab. It's just a missing form of energy which must have some peculiar properties. For example, it must exert negative pressure, which is what drives accelerated expansion. We just don't know what causes it." (See here for more on dark energy.)

Quantum physics offers one explanation for dark energy. According to this theory, the vacuum does not really exist in the sense we usually understand it, as empty space. Instead, particles constantly pop in and out of existence, resulting in avacuum energy, an energy of space itself, which might be driving the accelerated expansion. There's a number which measures that vacuum energy, called the cosmological constant, whose value particle physicists can estimate. The trouble is that this estimated value is bigger than what observations suggest. And not just a bit: the two values, observed and theoretical, differ by at least 60 orders of magnitude (see this article for more). Although the estimate stemming from quantum physics is rough and perhaps naive, the difference is so big that something is clearly, very wrong.

These problems, dark energy and the need to quantize gravity, provide some of the motivations for meddling with general relativity. And perhaps they are even connected. "The very large and the very small [scale problems] are not necessarily distinct," says Sotiriou. "It is technically very challenging, but not inconceivable that one could have an extension of general relativity that deals with the large scale problems, which would at the same time have a better behaviour when it comes to quantization. Maybe we can hit two birds with one stone."


But how does one go about finding such an extension of general relativity?

Fernandes suggests his quantization of ether and his equation below helps answer these questions,

So how did Fernandes arrive at his conclusion? He provides the following information:


Gravity of Earth is acceleration of Ether 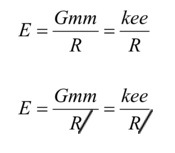 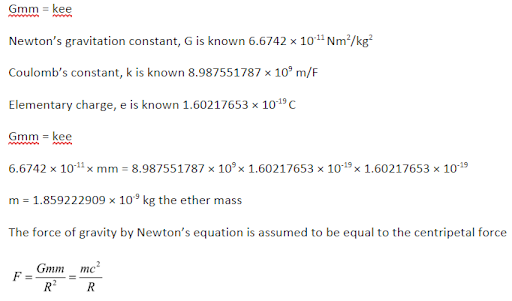 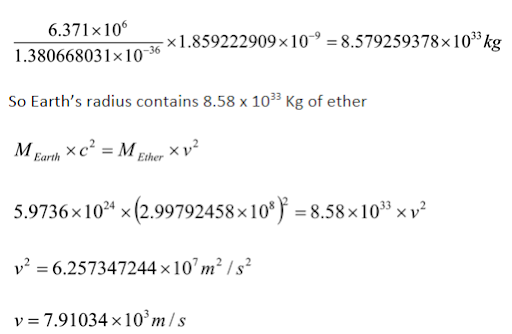 Acceleration due to Earth’s gravity, 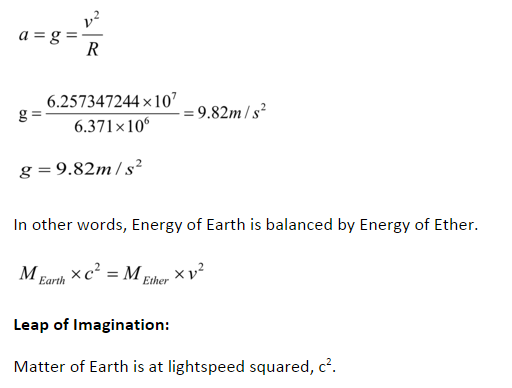 Back to the question of the speed at which we, the earth, and matter in general is moving, Fernandes suggests that we/matter are all moving at the speed of light squared.

He continues, “Matter is at the speed of light squared as seen in the matter of earth below. And mass is ether mass on the right side of the equation.”

The ether distribution to the power of 27 zeros in kilograms per radial meter holds good at the atomic and galactic scales. Fernandes concludes that “Acceleration due to ether is gravity.” 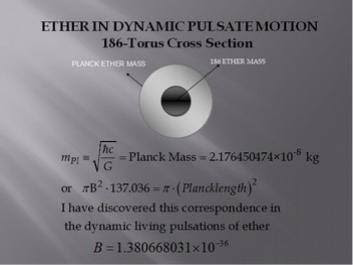 As depicted above the ether radius is the lower pulsate limit of the Planck length.

Yes, at the heart of the Universe is ether in dynamic pulsate motion by a factor of the Inverse Hand of God alpha number 137.036

The mainstream physics community will no doubt immediately scoff at Fernandes’ claims. However, mainstream communities often scoff at “fringe” declarations until those “fringe” claims eventually become mainstream themselves.

Regardless of how Fernandes’ claims will be received, it is important, for the sake of human civilization and the possibility of greater scientific development that his claims be seriously looked at and that his figures be put to the test.

Fernandes, for his part, is willing for his claims to be put to the test and for his figures to be challenged. He seems to welcome it, so sure he is of the outcome.

If he is right, his work will be some of the most groundbreaking physics related breakthroughs in modern times. We owe it to ourselves to look further into it.

What do you think? Do you have a physics background? Do Fernandes’ equations have merit?


This article (Did This Scientist Just Discover How the Universe Works?) can be republished under this share-alike Creative Commons license with attribution to Brandon Turbeville, the article link and Natural Blaze.com. Brandon Turbeville – article archive here – is an author out of Florence, South Carolina. He is the author of six books, [easyazon_link identifier="1519198396" locale="US" tag="natblaze-20"]Codex Alimentarius — The End of Health Freedom[/easyazon_link], 7 Real Conspiracies, Five Sense Solutions and Dispatches From a Dissident, volume 1 and volume 2, The Road to Damascus: The Anglo-American Assault on Syria, and [easyazon_link identifier="B015K0BUQM" locale="US" tag="natblaze-20"]The Difference it Makes: 36 Reasons Why Hillary Clinton Should Never Be President[/easyazon_link]. Turbeville has published over 600 articles dealing on a wide variety of subjects including health, economics, government corruption, and civil liberties. Brandon Turbeville’s podcast Truth on The Tracks can be found every Monday night 9 pm EST at UCYTV. He is available for radio and TV interviews. Please contact activistpost (at) gmail.com.
Posted by Admin at 5:56 AM