English Town Takes To Streets Against Fluoride In Water 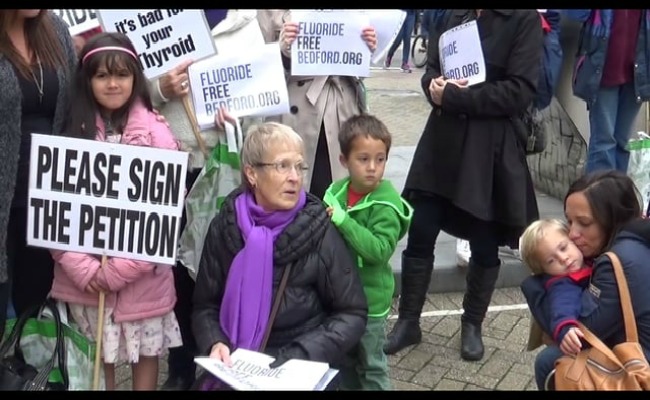 The streets of Bedford, England was the scene of an anti-fluoride campaign on Saturday, October 17 throughout the streets teams of activists with Fluoride Free Bedford were carrying clipboards and information packets to educate and encourage shoppers and passersby as to the dangers of forced water-fluoridation and their petition to stop it.

Fluoride Free Bedford has been calling for an end to water fluoridation since 2002 yet their new impetus for action comes as a newly elected group of councilors have taken office.


We want to stimulate discussion throughout Bedford and to stun councilors, to show them the huge amount of support there is from people who don’t want fluoride in their water supply.


It’s about educating ourselves and each other. The government isn’t doing it and nor is the counsel, they are just covering up the truth.

The water in Bedford borough had been fluoridated for about 40 years but in 2009 the process was temporarily suspended in order so that improvement and repairs could be made on the area’s water treatment plant. Fluoride Free Bedford is attempting to ensure that fluoride does not return.

The activists are frustrated because in 2011 the Bedford Borough Council voted unanimously to cease water-fluoridation – a proposal that was submitted by major Dave Hodgson. Still, no action was actually taken.


The only reason fluoride is added to our water supply is for it to have a physiological effect on the enamel of the milk teeth of very young children by exerting an effect from the inside of the tooth to the outside. This means that fluoride is a medicine and fluoridated water is, according to a judgement in the European Court of Justice, classified as a “functional food.” A “functional food” is first and foremost a medicine and thus, medicinal law takes precedence over food law. The difference is that pills are legalized medicine whereas fluoridated water is illegal medicine.

This article (English Town Takes to Streets Against Fluoride in Water) can be republished with original links. You have permission to republish this article under a Creative Commons license with attribution to Brandon Turbeville, Heather Callaghan, the original article and Natural Blaze.com.

Brandon Turbeville – article archive here – is an author out of Florence, South Carolina. He has a Bachelor’s Degree from Francis Marion University and is the author of six books,Codex Alimentarius — The End of Health Freedom, 7 Real Conspiracies, Five Sense Solutions and Dispatches From a Dissident, volume 1 and volume 2, The Road to Damascus: The Anglo-American Assault on Syria, and The Difference it Makes: 36 Reasons Why Hillary Clinton Should Never Be President. Turbeville has published over 600 articles dealing on a wide variety of subjects including health, economics, government corruption, and civil liberties. Brandon Turbeville’s podcast Truth on The Tracks can be found every Monday night 9 pm EST at UCYTV. He is available for radio and TV interviews. Please contact activistpost (at) gmail.com.

Heather Callaghan is a natural health researcher. You can see her work at NaturalBlaze.com. Like at Facebook.
Posted by Admin at 7:31 PM