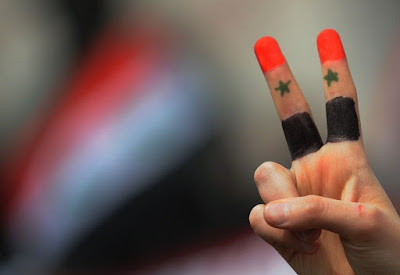 Western mainstream media outlets simply cannot show the results of the recent liberation of Western Aleppo in Syria without first doing much editing and damage control work on the television screen. While Western outlets continue the tired line that Syrian President Bashar al-Assad is "killing his own people" and that the poor democracy-loving "freedom fighters" armed, trained, and directed by the Western powers are nothing more than victims, scenes from Syria easily challenge any perceptions western audiences may have had regarding recent events there. In fact, any claims that the Syrian people are opposed to the government's liberation of Syrian territory is completely rebuffed with the pictures currently coming out of Aleppo.

Why aren’t you showing us these beautiful scenes of Syrians jubilantly celebrating the full liberation of #Aleppo from the clutches of Al-Qaeda, marking an end to 8 years of relentless terrorist shelling of their homes, schools and hospitals?#Syria pic.twitter.com/moct2ulump
— Sarah Abdallah (@sahouraxo) February 17, 2020


On February 16, Al-Masdar News reported the following regarding Aleppo:

According to a field source in Aleppo, the Syrian Army’s victory came this afternoon following the capture of the Layramoun and Kafr Hamra sectors, which were under the control of the jihadist rebels for most of the war.

In addition to capturing Kafr Hamra and Layramoun, the Syrian Army also took control of the Al-Zahra’a Association Quarter, which was the main battlefield in Aleppo city for most of the war.

At the same time, the Syrian Army has also captured the last towns in the Anadan Plain, including Hraytan, Babis, and ‘Anadan.

The loss of these areas will be devastating for the jihadist rebels in western Aleppo, as they now find themselves with virtually no presence near the provincial capital.

Shortly after the liberation, President Assad gave a speech congratulating the Syrian people and the Syrian military on the victory and promising more victories to come as the Syrian government seeks to make good on its promise to "liberate every inch of Syria."


When Aleppo city was liberated at the end of 2016, I said that what was before the liberation of Aleppo city will not be the same as what will be after that, and I based that on my knowledge of where the members of our Armed Forces are aiming with their hearts and minds. I based that on my conviction that the patriotism of the people of Aleppo and their fealty to their homeland and the homeland’s army will overturn the calculations of the enemies.

“This is what happened, but Aleppo had to pay a great price equal to the greatness of its people and the patriotism of its position; years of violent and barbaric shelling that affected most neighborhoods, tens of thousands of martyrs, injured people, orphans, people who lost children, and widows. Years of siege without water or electricity or other life necessities, all for Aleppo to kneel and for her people to surrender.

“With every treacherous shell that had fallen, the enemies’ hopes would grow that Aleppo would become another Aleppo, one that never existed throughout history, an Aleppo that does not constitute with its twin Damascus the wings by which the homeland soars; rather an Aleppo whose people would stand with traitors in front of masters, kneeling and prostrating themselves before them, beginning for a few dollars and much disgrace.

“That was in their dreams; but in our real world, with every shell that fell, fear fell and the will to challenge grew. With every martyr, nationalist spirit grew and faith in the homeland became stronger. In our real world, it remained the real Aleppo, the Aleppo of history, nobility, and authenticity. And because it is so, its people did not settle for steadfastness just in the sense of bearing of pain and suffering and acceptance of the status quo; but rather in the sense of work and production that persisted throughout the years of the siege despite the conditions that contradict any economic sense.

“Despite that, this city kept contributing – even if at a bare minimum – to national economy, and I am confident that this type of steadfastness which reflects a concrete will and a deep-rooted sense of belonging is what will raise Aleppo from the ashes of war and restore its natural and leading position in Syria’s economy."

“It is true that liberating the city in 2016 did not achieve the desired safety for the city at the time, and it remained under the threat of treacherous and cowardly shells, and it is also true today that victory in one battle does not mean victory in the war, but that is by the abstract military logic which is based on endings and results; however, by national logic, victory begins with the beginning of steadfastness even if it was at day one, and by that logic, Aleppo is victorious, and Syria is victorious. We are all victorious over the fear they had tried to instill in our hearts, victorious over the delusions they tried to instill in our minds, victorious over fragmentation, hatred, betrayal, and all those who represent or bear or practice these qualities.

“However, we are fully aware that this liberation does not mean the end of the war, or the failure of schemes, or the disappearance of terrorism, or the surrender of enemies, but it certainly means rubbing their noses in the dirt as a prelude for complete defeat, sooner or later."

“It also means that we must not relax; rather we must prepare for the coming battles. Therefore, the battle to liberate the countryside of Aleppo and Idleb will continue regardless of some empty sound bubbles coming from the north, and the battle for liberating all Syrian soil, crushing terrorism, and achieving stability will also continue.”

“Our Syrian Arab Army will never hesitate to carry out its national duties, and it will be as it always has been: an army from the people and for the people. Throughout history, no army has emerged victorious unless the people are united with it in its battle, and when it is united with the people in their vision and cause, and this is what we have witnessed in Aleppo and other Syrian cities, where you embraced the army it protected you, defended you, and made sacrifices for you.

“While we are experiencing times of joy, we must remember that these moments have been made possible by years of pain, heartache, and sadness, for the loss of a dear one that gave their life for the lives and happiness of others. As we bow in honor of the greatness of our martyrs and injured people, it is also our duty to stand in honor of the greatness of their mighty families. If victory is to be dedicated, then it is dedicated to them, and if anyone should receive credit for it, then they deserve the credit. I salute them for the children their raised, and salute their children for their sacrifices. I salute every one of the heroes of our great army and the allied forces begin them. I salute the strength of their bodies in the cold and frost as we bask in warmth and safety.”

In conclusion, Assad saluted "“our brothers, friends, and allies who stood shoulder to shoulder with the army on the ground and were guardian eagles in the sky, their blood intermingling with the blood of our army that was spilled in Aleppo, Aleppo the faithful to its homeland and history, which will never forget the blood of those who made sacrifices for it, and which will return as it was and stronger.

“Our beloved people in Aleppo, I congratulate you on the victory of your will, the will by which we will wage the greater battle: the battle to build Aleppo. By the will of all the Syrian people we will build Syria, and we will continue liberation, God willing,”


Brandon Turbeville writes for Activist Post – article archive here – He is the author of seven books, Codex Alimentarius — The End of Health Freedom, 7 Real Conspiracies, Five Sense Solutions and Dispatches From a Dissident, volume 1 and volume 2, The Road to Damascus: The Anglo-American Assault on Syria, The Difference it Makes: 36 Reasons Why Hillary Clinton Should Never Be President, and Resisting The Empire: The Plan To Destroy Syria And How The Future Of The World Depends On The Outcome. Turbeville has published over 1500 articles on a wide variety of subjects including health, economics, government corruption, civil liberties and, most notably, geopolitics and the Syrian crisis.

His most recent release is a book of poetry, Dance, Amputee. Brandon Turbeville’s radio show Truth on The Tracks can be found at UCYTV. His website is BrandonTurbeville.com. He is available for radio and TV interviews. Please contact activistpost (at) gmail.com He is from Columbia, SC.

Provide, Protect and Profit from what’s coming! Get a free issue of Counter Markets today.
Posted by Admin at 11:14 AM