Putin: In a Nuclear Holocaust “We Will Be Martyrs, They Will Drop Dead” 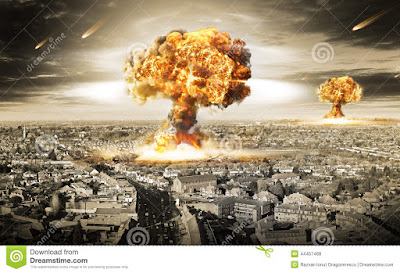 Ever since the Euromaidan color revolution in Ukraine, the threat of a thermonuclear confrontation between Russia and the United States has been steadily growing. With the United States and NATO forces having pushed their proxy fighters literally to the border with Russia, the world’s second superpower finally became directly involved in Syria, saving the country from the impending defeat by the Gulf Cooperation Council, NATO, Israel, and American terrorists being funded, trained, and armed for the purpose of destroying the secular government of Syria.

While Western media promoted each act of war on the part of the West as a valiant fight for freedom and every Russian response as aggression, alt media, MSM, and social media were all nonetheless alight with the stark reality that WW3 could very well have broken out at any minute if the Americans pushed too far or if the Russians failed to respond with their typically cool heads.

MSM, of course, took every chance it could to portray the Russians as aggressive, bent on world domination and the domination of American elections and, thus, if a world war did take place, America would be on the right side of history, even if the earth was uninhabitable.

Recently, however, there have been more rumblings of WW3, with warnings from Russia and concerns from American servicemen and women who are worried that the US is rushing headlong into a world-ending confrontation. Oddly enough, those concerns and worries have not been receiving as much attention in the world press as they have in the past.

Putin’s Comments
Exhibit A is the comments made by Russian President Vladimir Putin during a session of the Valdai Club, a Russian think tank in Sochi.

During the course of the meeting, Putin said “Any aggressor should know that retribution will be inevitable and he will be destroyed. And since we will be the victims of his aggression, we will be going to heaven as martyrs. They will simply drop dead, won’t even have time to repent.”

“Are we ready, am I ready to use the weapons at our disposal, including weapons of mass destruction, to protect our interests? I remind you what I said earlier. I said that in our concept of the use of nuclear weapons, there is no preemptive strike,” he added.

“For those who know, I don’t need to say what it is. For those who don’t, I will say it again. This means that we are ready and we will use nuclear weapons only when we are sure that someone, a potential aggressor, attacks Russia, our territory,” said Putin.

“And when we are sure, and this all happens within a few seconds, that there is an ongoing attack on Russia, only after that we strike back. This is the response, because they [missiles] fly at us, and then something will fly back, towards aggression,” he added. “The aggressor must be aware that retaliation is inevitable, that they will be destroyed. And we, the victims of aggression, as martyrs, will go to heaven, while they will just die, because they will not even have time to repent,” Putin said.

Currently, the Russian nuclear doctrine allows for using nuclear weapons only if Russia’s existence is at stake. While most people may take that statement to mean “only if there is a nuclear strike launched against Russia,” the truth is that Russia reserves to use such weapons in a conventional conflict as well, so long as Russia’s existence as a nation state is in danger.

The American nuclear doctrine also reserves to use nuclear weapons in response to a non-nuclear attack. More concerning, however, is that the US also reserves the right to use nukes in the event of an attack on its allies. Still, the US has been vague on just what would trigger such a response, with some believing that a powerful cyberattack might trigger a nuclear response from either country.

The US’ latest nuclear posture review says that Washington may use nuclear weapons in response to a non-nuclear attack on itself or its allies. It remains vague about the exact circumstances that may trigger such an action. This gave rise to speculation that even a cyberattack may permit a nuclear response. Meanwhile, a call for the creation of small-yield submarine-launched missiles and nuclear-capable sea-launched cruise missiles have only added to concerns that the US is stocking up for some kind of large-scale conflict.

Interestingly enough, despite Putin’s comments being made over the past week, America’s nuclear policy was updated as far back as February, 2018.

It should be noted that Valdai was founded in 2004 and conference attendees are generally some of the most powerful figures in Russia including most important government officials. It has been described as the “highest-profile Russian equivalent of Davos.” In other words, any comments made publicly at Valdai were comments made with the purpose of having them disseminated in the world press. That being said, only Russian-based outlets reported on Putin’s statement. For an MSM that is normally so ensconced in anti-Russian hysteria to ignore a statement of the Russian President that could be so easily warped and manipulated to sound as if he is threatening America with nuclear war, such silence is incredibly odd.

US Soldiers Fear A Coming War
Ever since the Ukrainian issue required a Russian response and a subsequent response in Syria, the United States and Russia have been continually coming closer and closer to direct military confrontation. This much is plain for all to see, particularly anyone watching the mainstream corporate news where an anti-Russian psychosis has gripped the major news channels. Mainstream media consistently tells Americans that Russia has hacked its elections, put Trump in power, is trying to destroy the American food supply through promoting non-GMO food (yes, really), killing the American people by telling them not to vaccinate (again, unfortunately, this is a real claim), and disrupting American “energy independence” through opposition to fracking as well as bombing nothing but babies, puppies, hospitals, and unicorns in Syria and Ukraine. All these nonsensical claims are repeated on the airwaves 24/7.

Incessant propaganda is drudged up against other countries as well – North Korea, Venezuela, and Iran – but the real prize is Russia. This much has been written about by people like Zbigniew Brzezinski in his book The Grand Chessboard.

This is perhaps why so many American service personnel feel that war is on the horizon. And not just a “normal” war, a big one.

In an article recently published by Military Times entitled, “US troops increasingly fear that a major war with Russia or China is just around the corner,” Leo Shane III writes,

Nearly half of all current military troops believe the United States will be drawn into a major war soon, a jarring rise in anxiety among service members worried about global instability in general and Russia and China in particular, according to a new Military Times poll of active-duty troops.

About 46 percent of troops who responded to the anonymous survey of currently serving Military Times readers said they believe the U.S. will be drawn into a new war within the next year. That’s a jarring increase from only about 5 percent who said the same thing in a similar poll conducted in September 2017.


For all our sakes’ we should hope he’s wrong too.

About the Author
Robert Wheeler has an extensive background in the world of geopolitics, international relations, NGOs, and color revolutions. He has spent years analyzing the world of state-sponsored terror, social movements, and international chess games that affect the lives of everyday citizens.
Posted by Admin at 6:52 AM