On Returning From Syria: More Convinced Than Ever Western Media Narrative Is Bullshit In early October, 2017, I had the pleasure of visiting Syria on a mission to get a sense of the toll of the war, the mindset of the people, and the general situation on the ground. The goal was to see the country in person, get a sense of what life is like in Syria today, talk to the Syrian people and hear their side of things; i.e. their opinions on the government and the “rebels/terrorists,” their living conditions, Syria before the war versus Syria now, and whatever else they wanted to share. We wanted to see the areas formerly under control of the terrorists and talk to the residents there. We also wanted to visit the areas firmly under government control and speak to the residents living in these areas as well.

Having covered the Syrian crisis for the entire six years of its duration, I had a pretty good sense of the opinions of the Syrian people and the situation they are facing as a result of numerous contacts inside Syria. However, there is no substitute for examining a situation first hand and talking with Syrians themselves with whom one has no prior personal connection as well as random strangers on the street in order to get an unfiltered response to the many questions we wanted to ask.

After having the chance to visit many of the places I had written about during the course of the crisis, everything I have written has now been confirmed first hand. I am now more convinced than ever that the “information” being spread across mainstream media outlets like CNN, MSNBC, FOX, and the rest are, quite simply, complete and total bullshit. There is no wonder Americans are so tragically ignorant of what is happening in Syria and the rest of the world when the constant barrage of media propaganda they are subjected to does nothing but promote claims and statements that are in direct contradiction to the facts.


The itinerary of the trip involved seeing a number of cities – Damascus, Aleppo, Homs, Tartus – and many smaller towns and villages in between.

Upon arriving in Damascus, the first thing that stands out is not the architecture or the traffic or even the fact that life has almost fully returned to the areas liberated by the Syrian military, but the people themselves. Many Americans, constantly tortured by media propaganda telling them that everyone in every foreign country hates them for freedom, religion, and short shorts, might be surprised to know that many of the people they believe hate them are intelligent enough to separate the American people from the American government even if Americans are not always intelligent enough to extend the same courtesy to them. 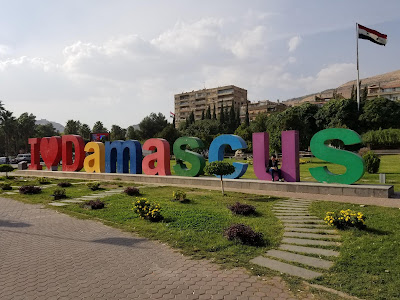 Regardless of the propaganda peddled to Western audiences, the Syrian people mark as some of the most welcoming, friendly, human beings in the world. From the first moment of entering the country, we were greeted by Syrian soldiers who, at virtually every checkpoint, welcomed us to Syria and then on to Damascus where the Syrian people expressed their famous hospitality. Everywhere we went for the entirety of the visit, we were greeted “Welcome to Syria” by soldiers, strangers, passersby on the street, business owners, and virtually everyone we came in contact with. The welcomes were clearly genuine. Everyone was obviously pleased and felt strangely honored that foreigners were visiting Syria and many expressed happiness that “tourists” were returning to Syria after six years of war. It was a sign that things are slowly returning to normal. 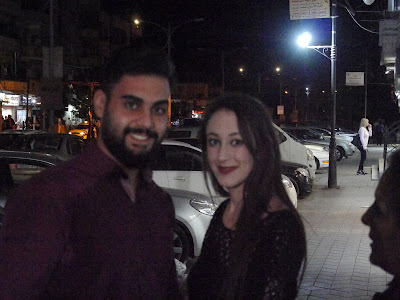 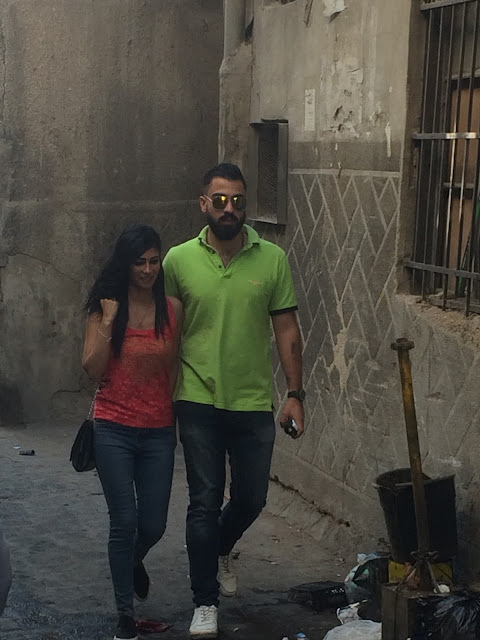 While Americans may remain under the impression that Syrians are obsessed with religion, wary and hateful towards foreigners (particularly Americans due to all our alleged “freedom”), I can say without qualification that this is not true and that never once did I experience any hostility from any Syrian during my entire visit. In fact, we were shown the complete opposite with myself and others being repeatedly invited to homes for dinner, tea, and coffee following a short conversation.

While one may be quick to dismiss the content of this article as mere ramblings of a tourist, it is nonetheless important. After six years of bombing, funding terrorists, and hysterical propaganda on the screens of virtually every American, Americans know as little about Syria as they did in 2010. The average American views Syria and Syrian culture as something similar to Saudi Arabia where all the women are covered from head to toe with no rights whatsoever, where non-Muslims are persecuted, and where Islamic law dictates that such an unlucky soul who might be born there cannot even access alcohol to drown his sorrows. The landscape of Syria to the average American is nothing but sand dunes as far as the eye can see – no water and no trees. Indeed, Hollywood and corporate media have done an excellent job at convincing middle America that these “normal” people are sand-dwelling savages from the stone age. This is no mistake since it is easier to hate and bomb savages than it is to murder human beings with families, jobs, and dreams of their own. American media has earned its money in this regard.

To dispel a few of these myths that should have been dispelled long ago it might be worth mentioning that the traditional depiction of the Middle East (covered women, savagery, and beheadings) is closer to the reality of America’s ally Saudi Arabia than anything in Syria. The country has deserts for sure but it also has mountains, lush green areas, coastal regions, and lakes. Women are able to drive, vote, hold public office and do virtually everything a man can do in Syria if they desire. Women are not covered. Instead, walking the streets of Damascus or any other major city, you will see plenty of uncovered women wearing tight jeans and tank tops. There are no religious police hunting them down as the government is secular and enforces secularism in terms of law and policy. Religious freedom applies to Muslims, Jews, and Christians alike. 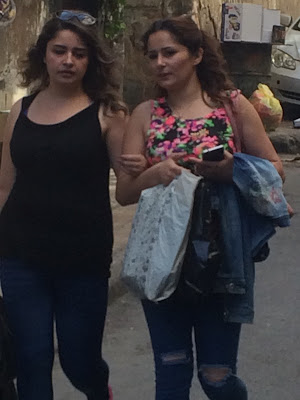 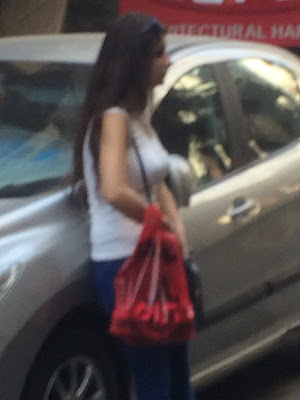 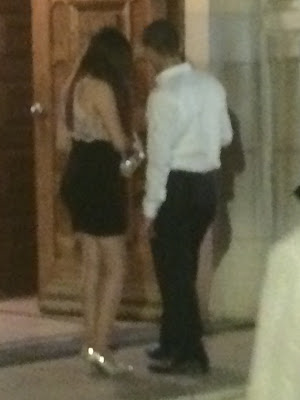 Bars are plentiful in the cities as are liquor stores and the general ability to be as drunk as one needs to be in order to feel like a Westerner is always present.

Religious fetishism plays harder in the minds of Americans themselves than it does in the life of the average Syrian. Muslim, Christian, Jew, and all the other branches of religion have coincided peacefully for generations and continue to do so today. A walk on the street of any city will reveal this clear as day. No one in Syria is engaged in a religious civil war. Only in the minds of Westerners subjected to daily propaganda is the Syrian crisis related to religion and only on the teleprompters of CNN and MSNBC is the crisis a civil war.

All throughout Syria, even after six years of intense fighting and some of the most brutal atrocities the world has ever seen having been committed by America’s terrorists, the Syrian people are beginning to rebuild. Even in areas formerly controlled by America’s cave-dwelling proxies, life is returning to Syria. Shops are reopening. Homes are being rebuilt and services are being restored. This is a hallmark of Syrians which has helped see the country through; resilience in the face of unimagineable odds.

A walk in the Souk near the Aleppo citadel which, once teeming with life and shops is now reduced to rubble and pockmarked walls, revealed Syrians walking to their old shops with bags and a shovel to begin the process of digging through the dirt, rocks, and rubble and clear out their shop stall for the eventual remodelling and reopening. Even in the midst of the constant sounds of shelling and bombing and under the hovering threat of suicide bombs, sleeper cell attacks, and counterattacks by America’s terrorists, restaurant owners and shopkeepers are back to work, carrying on with life in the aftermath and the fringe continuation of such incredible amounts of death. 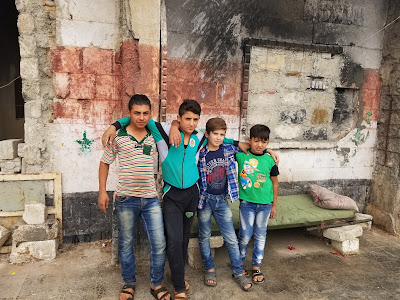 It is almost impossible to put to words the determination that the Syrian people have shown in not only preserving their culture through possibly the darkest period of the country or in rebuilding their homes and businesses but also their defiant will to refuse to submit to the attempts by Western imperialists to destroy their country and their culture.

Syria is a special country and most Syrians are conscious of that. It is not an abstraction to the people who live there. Having dinner in a hotel restaurant in Damascus, we met a Syrian couple who expressed their own knowledge that Syria was a special country on every level and how they were themselves tied to that land in a way in which most people would have no understanding. Truly, the blood of the land runs in their veins.

We spoke to a group of art and theatre students and their teachers who remained in Damascus throughout the war. The girls were in their early twenties, having experience the entirety of their teenage years in the throws of war. When they should have been learning to drive in the Damascus traffic, going on dates, and generally being teenagers, they were watching bombs drop on their city, seeing their friends and family members murdered, and struggling to get enough to eat day by day. Theirs is a youth wasted by America’s terrorists, teenage years that contain memories of the worst kind of atrocities with no room for teenage angst and resistance to the confines of schooling. Instead, bombs took the place of parties and teenage rebellion.

Despite all this, their outlook was suprisingly positive and incredibly life-affirming. “For us,” said one of the girls, “life is about living. We are surrounded by death so, for us, living is enough.”

After the conversation, as we were leaving, one member of our group thanked the women for taking the time to invite us in and to speak with us about their lives and the tragedies they each had to endure on such a beautiful day. To that, a woman responded, “Yes, but all days are beautiful. You only have to be able to recognize the beauty.” That, in a nutshell, is the Syria I experienced over ten days.

Later on, in discussions with a Syrian man, the question was asked how Syrians seem to be able to get back up on their feet and start living again, sending their children to school, working, rebuilding even as the war continues two miles away. The answer was simple: “This is Syria.” When it was suggested that the Western powers do not understand the Syrian connection to their country and their unmatched resolve to continue living and rebuilding what was lost, he agreed. “That’s right,” he said. “They don’t understand us. And that is why they lost.”

Brandon Turbeville – article archive here – is the author of seven books, Codex Alimentarius — The End of Health Freedom, 7 Real Conspiracies, Five Sense Solutions and Dispatches From a Dissident, volume 1 andvolume 2, The Road to Damascus: The Anglo-American Assault on Syria, The Difference it Makes: 36 Reasons Why Hillary Clinton Should Never Be President, and Resisting The Empire: The Plan To Destroy Syria And How The Future Of The World Depends On The Outcome. Turbeville has published over 1000 articles on a wide variety of subjects including health, economics, government corruption, and civil liberties. His website is BrandonTurbeville.com He is available for radio and TV interviews. Please contact activistpost (at) gmail.com.

This article may be freely shared in part or in full with author attribution and source link.
Posted by Admin at 3:06 PM