"But it's dangerous to go to Syria isn't it?" 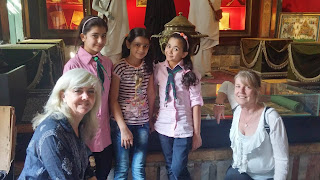 "But it's dangerous to go to Syria isn't it?"

Of bombs, bullets and travels in a war torn country.

Yes, I did get a taste of the war in my two trips to Syria this year. On the first, a village was massacred by terrorists not 24 hours after we passed within a 1km.

This trip, experienced more as mortars launched by "moderate rebel" terrorists into purely civilian areas of Damascus were landing very close by the hotel where we were staying. One day a bullet fired into traffic on a fast busy Damascus road was close enough that glass from another car that was hit landed in the seat next to me.

Things people there have had to live with for almost six years. They are sick of it. Maybe I'm weird or foolish (weird is relative but I try not to be foolish in general) because I didn't feel fear...just disgust that Syria has had to endure this nightmare because evil men and women with a love of money, lust for power, paranoia and above all, arrogance, are trying to control a country not their own.


There are dangers everywhere. Giving birth, climbing a mountain, driving to work...what is danger to a mother in labor or a mountain climber or someone needing to provide for their family? It is a factor only, one among many to be considered and then you do what you do. It is living and not just existing.

Yes, there are some risks traveling to Syria. And I can't wait to go back...this photo might help explain why.

"The fishermen know that the sea is dangerous and the storm terrible, but they have never found these dangers sufficient reason for remaining ashore." Vincent Van Gogh

Janice Kortkamp is a pro-Syrian activist who has traveled to Syria on several occasions to witness the situation firsthand. She has long opposed the U.S. war on Syria and given a number of lectures on the topic. She is an occasional contributor to BrandonTurbeville.com
Posted by Admin at 1:13 PM