War Is A Racket: Thank A Veteran But Don't Feed One 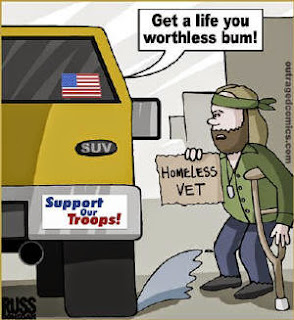 
Today, on November 11, cities and towns all across the country will organize parades to “honor” the men and women who fought for America’s freedom. In addition to the parades, Veterans will be given small perks at corporate chains, patriotic music and motivational themes will be played across television stations, and Americans will thank their veterans “for their service” as they have been instructed to do by their politicians and their television programming for the last several years.

Yet seldom do Americans ask what “service” they are thanking these veterans for since most Americans simply parrot the latest buzz terms without ever actually questioning them. Of course, there are some for whom no amount of war and slaughter will ever be enough to vicariously make them feel like bigger men or a great nation. Most, however, are simply ignorant.

The truth is that the service for which veterans are being thanked has nothing to do with the freedom of the American people. As the most decorated Marine in American history (at the time), General Smedley Butler, stated, "I served in all commissioned ranks from a Second Lieutenant to a Major General. And, during that time, I spent most of my time being a high-class muscle man for Big Business, for Wall Street, and for the Bankers. In short, I was a racketeer for Capitalism."

Butler discovered that he was a tool of the world oligarchy. Many others have since discovered the fact that they were nothing more than pawns, albeit of a much lower level, after their youth and health was spent in the process of slaughtering innocent people. Many soldiers from the world wars, Korea, Vietnam, Iraq, and Afghanistan have come to the same conclusion and, no doubt, a number of those who have participated in the attack on Libya, Iraq, and Syria will do the same.

There is also no doubt that many of these soldiers signed up because they perceived their country to be under attack and that those people across the world were vicious enemies who wanted to see the American people destroyed. While skewed and tragically ignorant, many joined the ranks of the military for noble reasons. Unfortunately, even the noblest of reasons does not make a lie the truth.


Whatever one’s reasons for joining the battle, the end result is the same. Thousands to millions of human beings – sons, fathers, mothers, daughters, grandmothers, cousins, wives, husbands – are killed in unimaginable ways because of the desires of international banks, corporations, and governments.

These people, despite the cynical and vile propaganda designed to portray them as subhuman savages, very much care about their families. They love them every much as Americans love theirs. They love their homes and the land they grew up on. Their hearts are ripped out of their chests when they lay their 2-year-old daughter in a shallow grave because Big Oil wanted a new pipeline. They lose a part of themselves when their ailing grandmother is stabbed to death because their village is just one step toward higher profits for international banks.

These are the “services” our veterans are performing while Americans are so far removed from reality that they foolishly attempt to suggest that what they saw on their television from the comfort of their homes on 9/11 somehow equates with the suffering that millions of Iraqis have felt and continue to feel on a daily basis.

Those who joined for the thrill and found war to be a pleasurable experience can then become police so they can continue to terrorize innocent civilians but, this time, do so closer to home.

But if their luck is not so fortunate; if they lost their legs, absorbed shrapnel, or injured their brain, then they will be forced into a future of disability and pain, substandard treatment, subsistence payments, unemployment, and despair. Talking about their wounds, of course, will keep Americans entertained at first, but only for so long. The general public simply does not have the attention span to hear war stories that end in wheelchairs and blindness, particularly if the story is told through stuttering lips and slurred speech. After all, John Wayne and Rambo never ended up in a wheelchair.

If, of course, they found war to be such a distasteful exercise that their own minds can no longer comprehend the experience and will no longer allow them to function in “normal society,” they will face these obstacles and more. Not even the requisite “thank you for your service” will be uttered to these victims of American “foreign policy.” Theirs will be a life of arrest, “psychiatric services,” drug addiction and alcoholism. Like their unemployed counterparts, mental victims of war will be relegated to homelessness where they walk through a new war zone where, this time, they are the helpless civilians but men in uniforms remain the real terrorists.

On the street, the same people who sent them to war by their armchair support or by their apathy will look at them with disdain on their way to the local Starbucks or football game. After all, John Wayne never asked for a handout. Rambo never mumbled to himself. They came home and got jobs. They got told “Thank you for your service” and they accepted it. They never reminded us about the ugly truth of war, that it is a racket and a boon for banks and corporations. They never forced us to understand that the people we supported killing were more like us than we ever could have imagined. John Wayne and Rambo were good veterans. It’s just a shame they weren’t real.

After our wars in the past, the “bad” veterans were always left behind to remind us of the after-effects of a tragedy far away. They reminded us that war is a two-way street even if it is not perceived that way on the political front. In 2014, however, we have had enough of being reminded. It is time for the homeless and, in particular, homeless veterans to go away. In cities all across the country, homelessness is being criminalized. The victims and reminders of the results of an imperialist war policy and free trade economics are being swept away from public view.

In cities throughout America, feeding the homeless is now against the law, punishable by fines and even jail. The most basic expression of humanity, kindness, and compassion – providing food – is now considered a crime. Ironically, these crimes are prosecuted in the same cities that will no doubt fund and organize Veterans Day parades.

Americans, however, are not interested in the veterans on the streets of Myrtle Beach, Orlando, orother cities across the country that enforce the rules demanding that they “Don’t feed the animals.”

For most Americans, rules are rules. The signs say “Don’t feed the animals” so they won’t.

Instead, they will thank them for their service and enjoy the parade.

Brandon Turbeville is an author out of Florence, South Carolina. He has a Bachelor's Degree from Francis Marion University and is the author of six books, Codex Alimentarius -- The End of Health Freedom, 7 Real Conspiracies, Five Sense Solutions and Dispatches From a Dissident, volume 1and volume 2, and The Road to Damascus: The Anglo-American Assault on Syria. Turbeville has published over 300 articles dealing on a wide variety of subjects including health, economics, government corruption, and civil liberties. Brandon Turbeville's podcast Truth on The Tracks can be found every Monday night 9 pm EST at UCYTV. He is available for radio and TV interviews. Please contact activistpost (at) gmail.com.
Posted by Admin at 4:13 PM