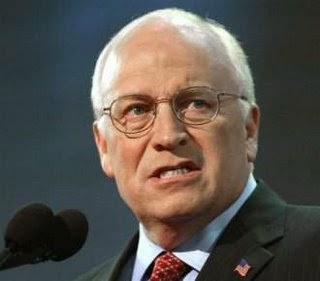 In an interview with ABC’s This Week, Paul not only backed off of the tepid criticism of Cheney’s corrupt and open conflict of interest he made in a previous speech, but he made clear that he was not questioning Cheney’s motives for leading the charge to invade Iraq.

Paul even went so far as to suggest that Cheney loves America as much he [Paul] does.

For reference, Paul had stated “Dick Cheney then goes to work for Halliburton, makes hundreds of millions of dollars as CEO. Next thing you know, he’s back in government it’s a good idea to go to Iraq.”

After playing the clip for Paul, the interviewer then asked him, “Do you really think that Cheney was motivated by his financial ties to Halliburton?”

What followed was a textbook flip-flop if ever there was one.


PAUL: I’m not questioning his motives.
KARL: Sure looked like you were questioning his motives.
PAUL: Well, here’s what I’m questioning, I don’t think Dick Cheney did it out of malevolence, I think he loves his country as much as I love the country…
KARL: But you said we don’t want our defense to be defined by people who make money off the weapons. Are you suggesting that’s why we went to war in Iraq?
PAUL: No. No.
KARL: That our defense was being defined by people who make money off weapons?
PAUL: No. And that’s why I’m also saying that I’m not questioning Dick Cheney’s motives.

This position does indeed put Paul and Cheney in the same boat. Cheney was allegedly opposed to going into Baghdad and then shifted his opinion on the matter while Paul was allegedly against Cheney and is now shifted that position as well.

Apparently, Paul also considers Cheney a “patriot,” a designation that might draw the ire of many of Paul’s own supporters who see Cheney as the antithesis of a patriot.


The point I was trying to make is one similar to one Eisenhower made. He said that the military-industrial complex — beware, because then they could be influencing policy by people who make money off government contracts. I wasn't intending really to impugn his personal motives. I think he is a patriot as much as anyone else, and wants what's best for the country. I don't always agree with him, but I don't question his motives.

It is also very interesting indeed that Paul would say that Cheney loves America as much as he does. Cheney is, after all, a man who was heavily implicated in 9/11, building the false case for war in Iraq, torture, illegal wiretapping and surveillance of both American citizens and foreigners, various corrupt deals with Halliburton, indefinite detention, and illegal expansion of presidential power among many many other crimes.

As The Atlantic writes,


Dick Cheney was a self-aggrandizing criminal who used his knowledge as a Washington insider to subvert both informed public debate about matters of war and peace and to manipulate presidential decision-making, sometimes in ways that angered even George W. Bush.

According to Rand Paul, however, this self-aggrandizing criminal loves America every bit as much as he does. This statement in and of itself should worry any American who may be tempted to support Rand in his run for the presidency.

Recently by Brandon Turbeville:
Brandon Turbeville is an author out of Florence, South Carolina. He has a Bachelor's Degree from Francis Marion University and is the author of six books, Codex Alimentarius -- The End of Health Freedom, 7 Real Conspiracies, Five Sense Solutions and Dispatches From a Dissident, volume 1and volume 2, and The Road to Damascus: The Anglo-American Assault on Syria. Turbeville has published over 300 articles dealing on a wide variety of subjects including health, economics, government corruption, and civil liberties. Brandon Turbeville's podcast Truth on The Tracks can be found every Monday night 9 pm EST at UCYTV. He is available for radio and TV interviews. Please contact activistpost (at) gmail.com.
Posted by Admin at 6:42 AM