If Walmart does not hold the title of “Most Evil Retail Corporation” as of yet, it appears to be doing everything within its power to achieve that name. Aside from destroying small businesses across the country as well as the towns that used to house them, operating incredibly atrocious production facilities, engaging in abuse of workers, and providing genuinely poor service and prices, Walmart remains determined to suck up every last dollar that it has immorally taken from the working poor over the last fifty or so years.

Even when Walmart workers themselves have finally been pushed beyond what they are able to stand, the corporation is incapable of providing concessions to even the most reasonable demands.

Thus, as Walmart workers have been forced to take action in the form of strikes and political/consumer pressure, Walmart steadfastly refuses to exhibit anything resembling humanity or even basic fairness.

Although Walmart could scarcely sink to further depths of greed and depravity, the corporation has indeed attempted to cover all bases in its race to return to the days of weave room girls and the horrific labor conditions of the industrial revolution. This much is evidenced by the recent release of Walmart training documents which were uncovered by Anonymous and made public by OccupyWallStreet. (see here also.)

These training documents are quite typical of the mindset of a major corporation. Yet they are also incredibly corny in terms of their suggestions and scripts of how to handle specific questions coming from employees.

The scripts supplied by the company predictably make the tired claim that unions are just after the employees’ money. The training manuals also promote “company loyalty,” and what they refer to as “open communication,” a term used synonymously with the “open door” which is nothing more than a laughable attempt to claim that employees have the ability to address all their concerns to the proper authorities without the presence of a union. The training manuals also stress the need to contact a special hotline to report any talk of unions or unionization.

Another set of documents were also publicized detailing Walmart’s fear of OUR Walmart, a group of Walmart workers who have banded together to fight Walmart’s abusive and exploitative labor practices. The documents involve outright false statements regarding the organization, as well as an obvious statement to convince management and workers that OUR Walmart is not out for their benefit and is out to destroy the company. Indeed, the documents would be hilarious if the issue were not so serious for so many people.

Walmart’s warning about OUR Walmart, a short slideshow with incredible amounts of obviously- slanted evidence and out-of-context statements, insinuates that OUR Walmart is a union in disguise and that the organization is only after the employees’ money in the form of membership dues (a hefty $5 per month). While it is granted that the average Walmart employee cannot afford another $5 per month fee, it is also true that $5 per month would pale in comparison to the institutionalized abuse heaped upon the average worker by their corporate employer.

What is most entertaining, however, is the way in which Walmart attempts to demonize both organizations by asking “Is OUR Walmart/UFCW really here to help you?” The sum total of Walmart’s evidence against the organization is one word: “No.”

The set of documents which is most interesting is the set labeled “Walmart Labor Relations Training: Salaried Manager Module.” These are the documents in which suggestions are made to managers for the proper ways in which to address employee questions about unions or possible representation. The following graphic is taken from those documents and it illustrates the way a manager is supposed to respond to an employee. 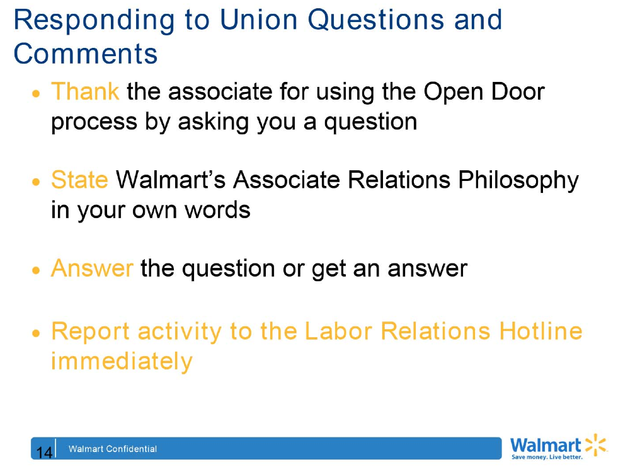 Abby Zimet of Common Dreams provides a few samples of what the Walmart training documents have to say about potential conversations between employees and their direct managers. The following dialogue could either be considered terrifying for its use of two-faced Public Relations and heavy-handed company rhetoric or it could be considered laughable due to its own stale and ridiculous nature of discussion. Either way, it is yet another example of the depths to which Wal-Mart will sink simply to avoid paying its workers a living wage.

Female Associate: Hey I have a quick question for you

Female Associate: Hey I was talking to one of the guys in my area and they told me that we could get an automatic increase in pay if we got a union in the store. Is that true?

Male Associate: Hmm, well that's a good question LaTonya, and thanks for asking, but you know our company doesn't feel that associates should have to spend their hard earned money to have someone represent them and neither do I. But to answer your question, through the collective bargaining process, there's no telling what they will end up with. They can end up with more, the same or even less.

Female Associate: Hmm you gave me a lot to think about I appreciate it. Thank you

First Female Associate: I'm just not really sure about all this union stuff, what would you do Susan?

Susan: Well thank you for asking, and you know Walmart doesn't feel like you need a union to speak for you and neither do I. I feel like we work well together and a union would only hinder our ability to communicate with one another. I like the Walmart Open Door Policy where we can communicate openly with our associates, kind of like we are doing right now.

First Female Associate: That's true we can, it's kind of nice to be able to do that.

In addition, Walmart contains a section that places its fears of unionization right alongside the U.S. Government's alleged fears over terrorism. Akin to an “If you see something, say something,” program, Walmart walks the aspiring manager through steps to recognize the possible existence of union sentiment or union presence in the organization.

These “Early Warning Signs” are as follows:
Aside from asking, “How would Walmart know who is showing up at their employees' homes,” these “warning signs” are obvious enough, particularly when one considers that conditions for dissatisfaction at a workplace like Walmart are present at every turn.

One of the designated responses to concerns such as those listed above is to call the Walmart Labor Relations Hotline (1-877-54-LABOR) and inform the proper Walmart authorities.

While none of the information contained in this article is shocking, it is nonetheless indicative of the behavior of what has come to be seen as one of the most heartless, greedy, and oppressive corporations across the world.

Walmart has taken advantage of political connections within the US government, anti-American trade deals, and a worldwide economic depression to expand its own retail empire and further exploit the average worker, producer, and consumer.

Below is a list of organizations who are attempting to fight Walmart’s abuses of their workers and their devastation of small towns.

Regardless of organization, however, one of the most powerful methods of fighting Walmart is the power of the purse. If you want to help stop the systematic abuses of the Walmart corporation, it is up to you to simply stop shopping there. Walmart cannot survive without our dollars, no matter how poorly they treat their workers or their producers.

Organizations actively opposing Walmart’s abuse of workers: (NOTE: If none of these organizations appeal to you, feel free to start your own!)
See more links at hel-mart.com Click here for links.

You can also view the documentary Walmart: The High Cost of Low Prices - on YouTube.

Recently from Brandon Turbeville:
Brandon Turbeville is an author out of Florence, South Carolina. He has a Bachelor's Degree from Francis Marion University and is the author of six books, Codex Alimentarius -- The End of Health Freedom, 7 Real Conspiracies, Five Sense Solutions and Dispatches From a Dissident, volume 1 and volume 2, and The Road to Damascus: The Anglo-American Assault on Syria. Turbeville has published over 275 articles dealing on a wide variety of subjects including health, economics, government corruption, and civil liberties. Brandon Turbeville's podcast Truth on The Tracks can be found every Monday night 9 pm EST at UCYTV.  He is available for radio and TV interviews. Please contact activistpost (at) gmail.com.
Posted by Admin at 10:25 AM