Will Russia Take the Blame for New Influx of US-NATO Mercenaries in Syria? 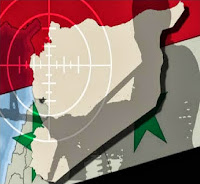 While Western governments and mainstream media outlets continue to downplay the foreign nature of the death squads roaming across the Syrian countryside, preferring to portray the conflict as a mostly Syrian affair, the fact is that the ranks of the so-called rebels are made up largely of foreign fighters who have been organized, trained, armed, and encouraged by Anglo-American powers to enter Syria and join in what they believe is a jihad and the establishment of an Islamic caliphate.

Of course, Western media tends to either tone down information regarding the foreign makeup of the Syrian death squads or even ignore it altogether in an attempt to convince the American/European public that the fighters are, in fact, disenchanted Syrian citizens struggling for democracy and freedom. With the increasing numbers of atrocities and the blatant disregard of the death squads for even the most basic rules of public relations, the nature of the coterie of killers known as the “rebels” has become increasingly hard to conceal.

Regardless, the foreign component of the death squads is well-known among informed observers of the Syrian crisis. Indeed, I, myself, have detailed the foreign nature of these fighters in a past article entitled “Foreign Death Squad Network in Syria Larger Than Stated By West.”

Recent reports have now emerged which bolster the already established fact that the “rebellion” is, in actuality, nothing more than an invasion of foreign fighters backed by the Anglo-American powers and their proxy states such as Saudi Arabia and Qatar.

The first report comes from Turkish news agency Taraf regarding information obtained from the organizations’ intelligence sources which indicates that about 500 more “rebel” fighters have entered Syria for the purpose of acting as foot soldiers to fight against the Syrian government. Of these fighters, some are jihadists assembled by Anglo-American powers and their proxies. Others, however, are simply mercenaries earning approximately $1,500 a month, largely recruited by private security firms although clearly at the behest of the same powers organizing the religious fanatics. A third division of the 500 fighters is a contingent of Turkish Kurds.

Taraf claims that many of the mercenaries are being recruited by rich Syrians in order to protect their assets. However, it is true that mercenaries have been operating in Syria ever since the beginning of the destabilization campaign in one form or another and, like their jihadist comrades, have been entering Syria via the Turkish border. It is thus very difficult to believe that mercenaries entering Syria at this point are simply responding to Syrian market demand for the protection of private property. In fact, it is much more believable that these mercenaries are just yet another fighting force designed to be used against the Syrian government.

Another report published on Global Research and written by Nikola Malishevski entitled, “Lithuanian Mercenaries Dispatched to Syria by Private Security Companies on Contract to NATO,” details the contracting and shipping of Lithuanian killers to Syria for the purposes of overthrowing Assad and destroying the Syrian government.

The Lithuanian mercenaries, according to Malishevski, are being organized directly by the United States and private security companies.

Economic hardship in Lithuania - high unemployment in particular - is creating good harvesting grounds for enlistment of Lithuanians as mercenaries in death squad units operating in Syria. As Malishevski writes:


High unemployment and a low standard of living in Lithuania, especially among the Russian population, are creating a good climate for enlistment. It will suffice to mention that even according to official, clearly underestimated, figures from the Lithuanian Department of Statistics, this level is such that over the past decade, the country’s population has fallen by more than 10 percent and continues to fall. Upon receiving their initial payment, many mercenaries from Lithuania, for some reason believing they will be able to survive in Syria, agree to take the rest of the money after the start of their contract.

Of particular interest to the Anglo-Americans are Lithuanians who have served in the military, previously engaged in military-based contract work for Western governments, former special forces operatives, military, radio, and electrical engineers and HGV drivers. Essentially, those individuals who are able to offer services of direct combat and military operations, as well as those who are able to provide logistical, shipping, and development, services necessary in both combat and post-combat zones, are the top recruits coming out of Lithuania. As Malishevski explains:


In mid-September, nearly 50 Lithuanian mercenaries were selected and are getting ready to board chartered flights from Lithuania to Turkey together with small groups of tourists. A preference is given to people aged between 25 and 40 who have carried out contracted military service in Western armies. Special forces operatives, military engineers, radio and electrical engineers and HGV drivers are the most sought after. In other words, specialists who can be used in both military actions and in post-conflict situations under the aegis of the occupation and puppet authorities (to deliver supplies, safeguard critical facilities and Western specialists, help with the creation and training of law enforcement bodies etc.)

As things stand now, on the one hand, Washington is seemingly in agreement with Moscow with regard to the Russian-American Framework Agreement on the liquidation of Syria’s chemical weapons which rules out military intervention, while on the other it is training up cannon fodder for a military invasion and service staff for the ensuing occupation regime in a country "liberated" from legitimate authorities.

The Anglo-Americans are also particularly interested in Lithuanians who can speak fluent Russian and those who have dual Russian-Lithuanian citizenship.

Of course, considering the fact that the West has already been involved in the staging of false flag chemical weapons attacks in Syria to be blamed on Assad for the purposes of justifying a military engagement, it is entirely reasonable for one to wonder whether or not the desire to recruit mercenaries from Eastern Europe who are fluent in Russian stems from a desire to initiate another false flag attack in Syria or some other nation to be blamed not only on the Syrian Government but on the Russian government as well.

Malishevski suggests that the presence of Russian speaking mercenaries in Syria could lead to a situation where the West “discover[s] a sensational fact regarding the 'involvement of Russian volunteers' fighting alongside Syrian rebels for human rights” which could “cloud relations between Damascus and Moscow; at most, it would weaken the front of international support for Syria.”

However, while Malishevski’s concern is an entirely plausible scenario, it is also possible that the presence of the mercenaries could be used to stage a false flag attack against Syrian civilians, specific ethnic or religious populations, or other nations entirely (such as Israel) to be blamed on the national governments of both Syria and Russia, an event which would, quite possibly, precipitate a massive international conflict.

Regardless, the revelations surrounding the hundreds of mercenaries being shipped into Syria from Lithuania and Turkey via the Turkish border are only one more strand in the DNA of a NATO-backed destabilization campaign itself made up of mostly of foreign actors on the ground. Indeed, in analyzing the Syrian crisis, it is an important fact to remember that what is deemed a “rebellion” by corporate media outlets is no rebellion at all. It is an invasion.

Brandon Turbeville is an author out of Florence, South Carolina. He has a Bachelor's Degree from Francis Marion University and is the author of six books, Codex Alimentarius -- The End of Health Freedom, 7 Real Conspiracies, Five Sense Solutions and Dispatches From a Dissident, volume 1 and volume 2, and The Road to Damascus: The Anglo-American Assault on Syria. Turbeville has published over 275 articles dealing on a wide variety of subjects including health, economics, government corruption, and civil liberties. Brandon Turbeville's podcast Truth on The Tracks can be found every Monday night 9 pm EST at UCYTV.  He is available for radio and TV interviews. Please contact activistpost (at) gmail.com.
Posted by Admin at 5:59 AM