Brandon discusses the crisis in Syria and His new book The Road To Damascus: The Anglo-American Assault on Syria.

"Activist Post writer Brandon Turbeville has just released his sixth book: The Road To Damascus: The Anglo-American Assault On Syria.

Brandon Turbeville presents a detailed and wide-ranging discussion and exposé of the unfolding crisis in Syria. He argues that the tragic events still currently taking place inside embattled Middle Eastern nation are not the result of an organic revolution, but rather is a carefully orchestrated outside assault against the people of Syria and their government by Western powers such as the United States, Britain, France as well as the ever-present satellite of Israel. 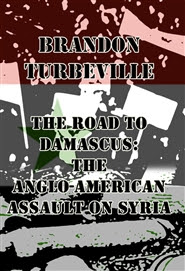 BUY NOW Turbeville deconstructs the mainstream Western narrative surrounding the crisis, exposes blatant lies and propaganda, and provides a more accurate picture of the players who make up the ranks of the so-called "Syrian rebels."

The Road To Damascus: The Anglo-American Assault on Syria is 566 pages of must-read information in order to understand the Syrian crisis."
Funny thing about the Legendary Road to Damascus - it doesn't always lead to where you thought you should go.

If, for instance,  you have ever heard someone say a person needs to "see the light", they were talking about the Road to Damascus.  This is also the source, I might add, of one of my all time favorite quotes.  “It is hard for thee to kick against the pricks” (Acts 9:5) on the Road to Damascus.  You just know that sentence is going to come in useful.

Brandon's extensively documented book is our tour guide as we discuss cannibalism in the latest  version of the Damascus Road Show.  There are conventional masacres, (and unconventional ) and a clownish chemical weapon frame.  Watch an equally clownish international attempt to make articles vanish (for about a whole week) before being rediscovered and put in the analysis spotlight.

The Hero of the Legend of the Road to Damascus, 2000 years ago was on a mission of state sponsored terrorism. It hurt to kick against the pricks of conscience . He saw the light.  Today, the whole world is on the road to Damascus.

It hurts to kick against the pricks.  Then again, some pricks need a kick (you knew that was coming.) See the light.