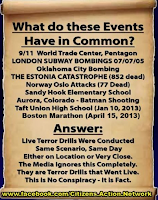 In the aftermath of the tragic Boston Bombing, numerous investigative reports have established the fact that drills were, indeed, taking place during the course of the event. As Ali Stevenson, a University of Mobile coach who was present at the marathon, confirmed, bomb sniffing dogs and other “emergency personnel” were present as a part of a “training exercise” or drill.

In addition to drills, however, we have the puzzling presence of the Massachusetts National Guard Civil Support Team (CST) at the event, shortly before the bombings occurred. (See the subsequent reports here, here, and here)

Yet, in examining the drills scheduled to take place in Boston during the attack, it might also prove helpful to examine the possibility of other types of terror drills taking place across the rest of the country, since the event itself did have nationwide reverberations and since such evidence of “coincidental” planning may further point toward the veracity of claims asserting a false flag attack having taken place in Boston.

Two such drills have predictably surfaced in the last several days.

One of the drills, which took place at Three Mile Island just outside of Harrisburg, Pennsylvania, was “coincidentally” scheduled for the day after the Boston Bombing and did, in fact, take place on the Tuesday after the bombing.


The Harrisburg drill, “the first simulated test of a terrorist attack on a nuclear power plant” was designed to simulate “an attack by a group of eight armed men” on the facilities according to a statement by the Federal Emergency Management Agency (FEMA) spokesman Peter Herrick Jr. as reported by Michael Sadowski of Yahoo! News.


It was stated by Alan Brinser of the Pennsylvania Emergency Management Agency that “Tuesday's test involved more than 1,200 participants in 76 municipalities and 15 school districts.” Brinser also stated that the site of the next drill has not yet been publicly released.

According the Yahoo! News report, the drills were scheduled in accordance with the Nuclear Regulatory Commission’s (NRC) requirement “that the country's 65 nuclear power plants test their preparedness for terrorist incidents every two years.” The requirements went into effect in November, 2011 and have been in the planning phase ever since. The full history of these requirements can be read here at NRC: Backgrounder on Force-on-Force Exercises at Nuclear Power Plants.

The second drill taking place on or around the day of the Boston Marathon Bombing was located as far south as the Carolinas and, interestingly enough, was supposed to encompass almost entirely the same scenario as that which took place in Boston the day before the South Carolina drills were supposed to take place. The North/South Carolina exercise, however, was planned at least a year before.

These drills were scheduled to take place over two days and envisioned a bomb detonation at Bank of America stadium in Charlotte, North Carolina.

Reporting for WSPA, Robert Kittle described the scenario as follows:


Under this scenario, some of the people in Charlotte hospitals would be moved to Columbia so the bombing casualties could be treated in Charlotte.

On day one of the drill, participants walked through how they would get the patients off of airplanes, into a hangar, assessed and then routed to Columbia-area hospitals. On Wednesday, two military transport planes filled with actors and mannequins will land at the airport and the responders will go through a more realistic exercise, actually taking the "patients" off the planes and taking care of them.

Also worth mentioning is the fact that the military, which has played such a prominent role in the response to the Boston Bombing and the martial law lockdown of the city, featured as a major participant in these drills as well. As Kittle writes,


More than 150 people from the military, state and local agencies, and 14 regional hospitals are taking part in the two-day exercise at Columbia Metropolitan Airport. The exercise is part of the National Disaster Medical System, which is activated if a disaster is so large that it overwhelms a local area's ability to provide sufficient medical aid.

When asked about “emergency responders’” reactions after seeing what had taken place in Boston, Jeff Straub, Emergency Manager/Safety Officer for the Spartanburg and Regional Health Care System, as well as the individual in charge of the drill, gave an interesting response.


We weren’t surprised. It's unfortunate and we hate that anyone was injured, but I think it solidifies why we do these exercises and the importance that it can happen anywhere: Boston, Greenville, Columbia. Any of those areas, if there's a threat, we need to deal with those accordingly.

Of course, the above statement should not be taken as a suggestion that Mr. Straub was consciously involved in any false flag event or that he was willingly a part of a disinformation campaign. The paranoia regarding terrorism and imminent attacks has been so embedded in the American psyche that it is highly likely that Mr. Straub believes his own fear-mongering.

But one does legitimately question the reason why drills are taking place at virtually the same time as the Boston Bombing, with at least two of them (Boston and North and the Carolinas) involving scenarios eerily identical to the Boston event itself.

Granted, they are taking place in different locations. However, the fact is that coordination of these drills are not just taking place at the state and local level; they involve Federal agencies overseeing and playing a major role. Let us not forget that the drills surrounding the 9/11 events did not take place only in New York.

For this reason, one would be justified in suspecting that the drills surrounding the Boston attacks may be related to government involvement in the Boston Bombing itself, with the architects of such an attack using the planning and development of drills occurring in other locations in order to obfuscate the actual planning of the Boston event.

At this point, however, we simply do not know the role that the drills, if any, played in the Boston Bombing. For that reason, it is yet another anomaly we can add to the long growing list of unanswered questions surrounding this event.

I encourage readers to investigate whether or not drills were occurring in their state on or around the Boston events and post their findings in the comments below.

Brandon Turbeville is an author out of Florence, South Carolina. He has a Bachelor's Degree from Francis Marion University and is the author of three books, Codex Alimentarius -- The End of Health Freedom, 7 Real Conspiracies, and Five Sense Solutions and Dispatches From a Dissident. Turbeville has published over 200 articles dealing on a wide variety of subjects including health, economics, government corruption, and civil liberties. Brandon Turbeville's podcast Truth on The Tracks can be found every Monday night 9 pm EST at UCYTV.  He is available for radio and TV interviews. Please contact activistpost (at) gmail.com.
Posted by Admin at 6:58 AM