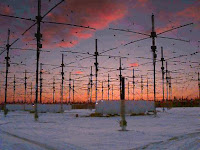 Few government research programs have produced as many questions and as much speculation as the High-Frequency Active Auroral Research Program (HAARP). From the potential of HAARP to disrupt and control communications to the possibility of controlling the weather and creating natural disasters, the sophistication of HAARP and the extent to which it is being used is the subject of much debate.

However, while many may speculate over just what the good folks working at the HAARP stations are up to, the fact is that an overwhelming majority are incapable of admitting that the facilities even exist in the first place.

Yet, while denial might placate those who do not prefer to confront unpleasant facts, truth does not mold itself to the wishes and desires of the willfully ignorant. Matters concerning the existence of HAARP and its ability to produce quite amazing phenomena are clearly documented in scientific literature as well as by those who have researched the program independently for years.

For instance, the research paper “Geometric modulation: A more effective method of steerable ELF/VLF wave generation with continuous HF heating of the lower ionosphere” published in Geophysical Research Letters, listing three methods of geometric modulation – line sweep, saw-tooth sweep, and circle sweep – not only examines the fact that HAARP is capable of generating and bathing regions of the country in ELF/VLF waves, but demonstrates that it is currently doing so.

This information thus confirms the findings presented by independent researchers like those at Sincedutch who have, for some time, described HAARP wave modulation using similar terminology such as HAARP rings, Stairstep Patterns, and Scalar Squares.

Recently, however, the U.S. Naval Research Laboratory (NRL) has added more evidence to the claims that HAARP is capable of affecting and controlling weather.

This is because researchers from the Plasma Physics Division at the HAARP transmitter facility in Gakona, Alaska, have recently announced that they have been able to produce a “sustained high density plasma cloud in Earth's upper atmosphere.”

The cloud, which Paul Bernhardt, Ph.D of the Space Use and Plasma Section describes as a “higher density plasma ball,” was able to be sustained for a full hour, where most of the previous plasma clouds (that the project is admitting to creating) have only lasted for around ten minutes. This new plasma cloud creation, however, was only terminated after the HAARP radio beam itself was terminated, so it is highly possible that the cloud could have been maintained for much longer than the mere one hour reported by the NRL.

Using the 3.6-megawatt high-frequency (HF) HAARP transmitter, the plasma clouds, or balls of plasma, are being studied for use as artificial mirrors at altitudes 50 kilometers below the natural ionosphere and are to be used for reflection of HF radar and communications signals.

Past attempts to produce electron density enhancements have yielded densities of 4 x 105 electrons per cubic centimeter (cm3) using HF radio transmissions near the second, third, and fourth harmonics of the electron cyclotron frequency. This frequency near 1.44 MHz is the rate that electrons gyrate around the Earth's magnetic field.

The article continues by saying,

Optical images of the artificial plasma balls show that they are turbulent with dynamically changing density structures. Electrostatic waves generated by the HAARP radio transmissions are thought to be responsible for accelerating electrons to high enough energy to produce the glow discharge in the neutral atmosphere approaching altitudes of nearly 170 kilometers.

The Naval Research Laboratory claims that its researchers are working on this project in order to “synthesize the observations with parametric interactions theory to develop a comprehensive theory of the plasma cloud generation.” In this goal, the NRL will be collaborating with SRI International, University of Alaska Fairbanks, University of Florida, and BAE Systems.

It should also be noted that the experiment which produced the results mentioned above (the creation of the hour-long plasma cloud), was itself part of the Defense Advance Research Projects Agency (DARPA) campaign known as Basic Research on Ionospheric Characteristics and Effects (BRIOCHE). BRIOCHE is a project that exists, according to the NRL, for the purposes of exploring “ionospheric phenomena and its impact on communications and space weather.”

Indeed, the fact that the HAARP-based project is not one that will prove beneficial to mankind is evidenced by the involvement of not only DARPA but also of BAE Systems, a British multinational defense contractor, which only recently began negotiations with European Aeronautic Defense and Space Company N.V. (EADS) to create a merger between the two companies. The resulting defense and security group, if the negotiations go through as planned, would produce the world’s largest aerospace and defense corporation, even bigger than Lockheed Martin, Northrop Grumman, and Boeing.

SRI International also has a history of acting as a defense contractor and defense and security development firm, with a special knack for Earth and Space research. The SRI International website even states that the organization “examine(s) the fundamental processes governing the upper atmosphere and space.”

While the true nature of the HAARP tests reported by the NRL and currently taking place are shrouded in mystery, one thing is for certain: not only does the program exist, it is capable of creating some truly amazing and seemingly natural occurrences. That is, natural to those who are unaware of the capabilities of the technology.

Brandon Turbeville is an author out of Florence, South Carolina. He has a Bachelor's Degree from Francis Marion University and is the author of three books, Codex Alimentarius -- The End of Health Freedom, 7 Real Conspiracies, and Five Sense Solutions and Dispatches From a Dissident. Turbeville has published over 200 articles dealing on a wide variety of subjects including health, economics, government corruption, and civil liberties. Brandon Turbeville's podcast Truth on The Tracks can be found every Monday night 9 pm EST at UCYTV. He is available for radio and TV interviews. Please contact activistpost (at) gmail.com.
Posted by Admin at 5:44 AM