In yet another move that could be seen coming from a mile away by even the most casual observer, a recently released statement from the Department of Defense is announcing that U.S. agencies are now “aiding” Afghanistan to locate and pinpoint the nation’s mineral wealth.

This “treasure mapping” of Afghanistan is being conducted in anticipation of the opening of the bidding process for private companies who are no doubt salivating as they wait in the wings for their opportunity to gobble up the natural wealth of the impoverished and war-torn nation and, subsequently, turn it into massive profits.

As part of the DOD’s Task Force for Business and Stability Operation (TFBSO), the DOD and USGS (United States Geological Survey) are working together to “map more than 70 percent of the country’s surface and identify potential high-value deposits of copper, gold, iron, and other minerals.” Obviously, the initiative also includes the Afghan Ministry of Mines and the Afghan Geological Survey.

In describing the TFBSO, task force official James Bullion stated that, “The task force is a Defense Department organization charged to help spur and grow the private-sector economy in Afghanistan, . . . and clearly, the mineral and oil and gas extractive areas are critical to that effort.”

He continues by saying, “The work that the U.S. Geological Survey has done has been critical to the whole process. In essence, what they’ve done is built a treasure map for Afghanistan, which is full of hidden mineral and oil and gas treasures.”

However, the term “hidden” is only a matter of perspective. While the mineral, oil, and gas reserves might have been hidden to the vast majority of the world’s population, they were anything but to the major governments that rule over them.

For instance, even the DOD press release admits that the USGS obtained data form a former Soviet mission that took place over 10 years to “help” the Afghan government with the mapping of these treasures. Much of the admitted data was anywhere from 50 to 75 years old, yet there is no doubt that the current invaders were well aware of its existence long before boots ever hit the ground.

Indeed, it is an interesting coincidence that two superpower invaders in modern history would place so much emphasis on the geological mapping of an area consumed with so much turmoil and tactical resistance.

Nevertheless, the USGS, in conjunction with other groups and agencies, is using hyperspectral instrumentation in order to map the Afghan treasure trove.

As USGS Director Marcia McNutt explains, “Hyperspectral data uses the reflectance of light and uses the fact that different minerals reflect light in different wavelength bands. Every mineral has its own signature or fingerprint.”

She also stated that the hyperspectral instrument “can be used in a place where there’s no vegetative cover, and Afghanistan happens to have almost no vegetation and it is resource-laden. And because of plate tectonic properties, . . . it has been tectonically uplifted and tectonically unroofed to reveal at the surface the mother lode of resources.”

During a period of 43 days and 23 flights, the USGS flew close to 23,000 miles across Afghanistan. In addition, NASA contributed its own aircraft in 2004 for the same purpose. It was actually the NASA mission that helped map the 70 percent of the country mentioned earlier.

As for what has been found, Jack Medlin of the USGS International Programs office and specialist for the Asia-Pacific region, stated that, “We have identified somewhere between 10 and 12 world-class copper, gold, iron ore [and] rare earth deposits that no one knew were there.”

While the reader would be well-advised to ignore the “that no one knew were there” part of the statement, Medlin continues by saying, “In our 2007 publication, we gave an estimate of undiscovered mineral resources for the country, and . . . you can add up the tonnages of copper, lead, gold, iron, silver, and so forth. . . . But this county has many more world-class mineral deposits than most countries in the world, if not more than any country.”

It is a very interesting coincidence then, that this country would also be the target of continual invasion and occupation throughout history. 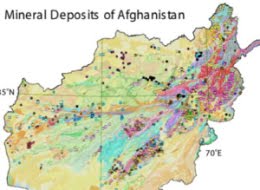 However, it is obvious that the mineral, oil, and gas deposits were well-known amongst the oligarchical world elite for some time. This, of course, includes the “American” branches of the elite club as well.

This is what Eric Blair refers to in his article “Afghanistan Mineral Deposits Was ‘Economic Prize’ All Along,” when he states, “In fact, this stunning new discovery has been the target of American hegemony for well over a decade. Indeed, it may well be the reason for the sustained War in Afghanistan . . .”

Blair has great reason for making this pronouncement. Indeed, he goes on to quote Zbigniew Brzezinski in his 1997 book, The Grand Chessboard: American Primacy and Its Geographic Imperatives. On page 124 of the book, Brzezinski states, “. . . the Eurasian Balkans are infinitely more important as a potential economic prize: an enormous concentration of natural gas and oil reserves is located in the region, in addition to important minerals, including gold.”


America’s global primacy is directly dependent on how long and how effectively its preponderance on the Eurasian continent is sustained . . . A power that dominates Eurasia would control two of the world’s three most advanced and economically productive regions . . . most of the world’s physical wealth is there as well, both in its enterprises and underneath its soil.

Regardless, the Armed Forces Press Service press release, written by Cheryl Pellerin, states that no stone will be left unturned in the rush to distribute the wealth that rightly belongs to the Afghan people. It reads:


Once a company wins a bid for an Afghan sites, it will gather all information about the site, including the hyperspectral data and any geologic, geochemical and geophysical information, he [Medlin]said. It will also send its own geologists to the site to do detailed mapping and arrange for detailed airborne gravity and magnetic studies, Medlin said, which gives the company a subsurface three-dimensional picture of the ore deposit.

This is quite the service indeed, since such exploration seems like it would be something that the companies themselves would undertake when exploring new territory for minerals, oil, and gas. But, why would they do so when they have the taxpayer to get that part of the project out of the way for them?

Beyond the obvious lucrative aspects of the minerals mentioned above, however, it should be noted that just the deposits of lithium under Afghan soil is expected to rake in astronomical profits which is described as being in the trillions of dollars by internal Pentagon memos quoted by the New York Times.

The phrase now being repeated among those aware of the hidden Afghan wealth is that the lithium deposits alone could turn Afghanistan into the “Saudi Arabia of lithium.”

Indeed, with the rapidly increasing transition to total cellphone use and electronic communications, directional, and operational systems, lithium will only increase in value as time progresses.

One only needs to take a look at this short list of the highly-profitable uses of lithium in order to understand the importance the mineral already has and is set to have in the future.

Afghanistan’s Ambassador to the United States, Eklil Hakimi has also recently stated that, “The estimated direct revenue to be generated by royalties and taxes from the extractive industries could reach up to $1.5 billion by 2016 and exceed $3.7 billion by 2026 and will become a major source of employment, with 165,000 jobs anticipated by 2016 and up to half a million by 2026.”

Of course, Ambassador Hakimi’s optimism might be just a bit premature. The likelihood that the revenue coming from the extraction of these minerals will find its way to the Afghan people is extremely low if history is anything to go by. Jobs, however, as underpayed, overworked, and expendable mine workers might actually be available; so at least part of his statement has the potential of coming true.

In the end, those that accused their governments of marching to war in Afghanistan for ulterior motives have been proved right yet again. Whether the reason for military invasion and occupation of the devastated nation was the result of a desire to control the opium trade, minerals, oil, and gas, or to secure pipelines and strategic geopolitical positioning, the fact is that the false flag attacks of 9/11 [1] served only as the justification [2] – not the reason. Indeed, in my experience, there is rarely only one reason for any move that is made by the ruling elite.

The only real question is how many times those have studied history must be proven right in hindsight before the masses begin to take notice in the present.

You can support this information by voting on Reddit HERE

Brandon Turbeville is an author out of Mullins, South Carolina. He has a Bachelor's Degree from Francis Marion University and is the author of three books, Codex Alimentarius -- The End of Health Freedom, 7 Real Conspiracies, and Five Sense Solutions and Dispatches From a Dissident. Turbeville has published over one hundred articles dealing with a wide variety of subjects including health, economics, government corruption, and civil liberties. Brandon Turbeville is available for podcast, radio, and TV interviews. Please contact us at activistpost (at) gmail.com
Posted by Admin at 7:11 AM