Salient Points About The Soleimeini Assassination 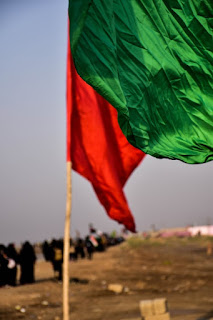 This article contains some brief information, culminated from this writer and a number of others written in the aftermath of the US assassination of Qassim Soleimani. I highly encourage you to read the articles linked after the quotes below and explore the rest of what these researchers have to say.

(1.) The claim that Soleimani posed an “imminent threat” is completely without evidence, rumored to be “razor thin”, and entirely debunked in this excellent essay by Craig Murray. Caitlin Johnstone - "The US Government Lies Constantly, And The Burden Of Proof Is On The Accuser"

(2) Mike Pence’s claim that Soleimani assisted 9/11 terrorists is so ridiculous that even the war-loving Washington Post dismissed it. Caitlin Johnstone - "The US Government Lies Constantly, And The Burden Of Proof Is On The Accuser"

(3) There’s no proof that Soleimani directed the strike that allegedly killed a US contractor, or that that contractor even existed. Caitlin Johnstone - "The US Government Lies Constantly, And The Burden Of Proof Is On The Accuser"

(4) There’s no proof that Soleimani was involved in any “attack” on any US embassy, leaving aside the obvious fact that a little graffiti on the walls wouldn’t justify his assassination if he did. Caitlin Johnstone - "The US Government Lies Constantly, And The Burden Of Proof Is On The Accuser"

(5) The “hundreds of American deaths” line you hear regurgitated by everyone from Trump to Elizabeth Warren actually refers to Iraqis defending themselves from an illegal US invasion with some training from Iran. The claim that Iran was behind Iraqi bombs is without evidence and wouldn’t matter if it were true; claiming the inhabitants of an invaded nation don’t have the right to defend themselves is absurd, regardless of where they got their weaponry.  Caitlin Johnstone - "The US Government Lies Constantly, And The Burden Of Proof Is On The Accuser"

This is a horribly inconvenient fact for US administrations which, regardless of party, are beholden to Saudi Arabia and its money. It is, the USA affirms, the Sunnis who are the allies and the Shias who are the enemy. Yet every journalist or aid worker hostage who has been horribly beheaded or otherwise executed has been murdered by a Sunni, every jihadist terrorist attack in the USA itself, including 9/11, has been exclusively Sunni, the Benghazi attack was by Sunnis, Isil are Sunni, Al Nusra are Sunni, the Taliban are Sunni and the vast majority of US troops killed in the region are killed by Sunnis.

Those were US troops killed in combat during an invasion. The Iraqi Shia militias – whether Iran backed or not – had every legal right to fight the US invasion. The idea that the killing of invading American troops was somehow illegal or illegitimate is risible. Plainly the US propaganda that Soleimani was “responsible for hundreds of American deaths” is intended, as part of the justification for his murder, to give the impression he was involved in terrorism, not legitimate combat against invading forces. The idea that the US has the right to execute those who fight it when it invades is an absolutely stinking abnegation of the laws of war. As I understand it, there is very little evidence that Soleimani had active operational command of Shia militias during the invasion, and in any case to credit him personally with every American soldier killed is plainly a nonsense. But even if Soleimani had personally supervised every combat success, these were legitimate acts of war. - Craig Murry "Lies, The Bethlehem Doctrine And The Illegal Murder Of Soleimani,"

(6) The claim that Soleimani was “a terrorist” is only made because the branch of the Iranian military he commanded was arbitrarily designated a terrorist organization by the US government last year, a designation that any foreign government could just as easily make for any branch of the US military. He was actually a fearsome enemy of ISIS and al-Qaeda and played a massive role in halting the spread of ISIS. Caitlin Johnstone - "The US Government Lies Constantly, And The Burden Of Proof Is On The Accuser"

Who could forget that journalist Judith Miller at The New York Times published blatantly false intelligence directly from the CIA about Saddam Hussein hiding WMDs?

The United States knowingly launched a deadly and unjustified assault against Iraq in 2003, began an occupation, and never left. US troops have no business in Iraq. Their purposes are to protect US military contractors and oil facilities while providing a base for launching future attacks against Iran, Syria, and other countries in the region.

288 thousand people have died in Iraq since Washington began its aggression, according to Iraq Body Count, with millions more displaced or injured.

Meanwhile, every US taxpayer has spent $24 thousand on post-9/11 wars with costs totaling nearly $6 trillion. Given recent events, they can only expect to pay more in the coming years.

The United States has no business occupying Iraq and never did. - Randi Nord - "9 Things Americans Need To Know About General Qasem Suleimani's And The US Occupation Of Iraq"

(8) The United States has Iran completely surrounded with military bases.

The map below doesn’t show the 12 known US bases in Iraq but it does demonstrate the US military buildup around Iran, particularly in Kuwait, Afghanistan, Bahrain, and the United Arab Emirates.

Many Americans have no idea why Iran and the United States have such a sordid history. Most just assume the relationship is naturally hostile, almost cartoonish.

In 1953, Washington and London overthrew Iran’s democratically elected leader, Mohammad Mossadegh, in a coup d’etat for the crime of nationalizing Iran’s vast oil supply to benefit the Iranian people instead of western companies. Western powers installed the Mohammad Reza Pahlavi Shah regime who gladly signed deals with British Petroleum and other foreign oil contractors for profit. (Yes, that BP).

After nearly two decades of stolen wealth and austerity, the Iranian people rose up, overthrew the Shah, kicked out the Americans and Brits, and the Islamic Revolution was born.

Washington has resented Iran ever since. Every US president since 1979 has made it their mission to punish Iran with sanctions, violence, and overthrow until they decide to “play nice” with global capital.

But it’s not all about the oil. Iran is a thorn in Washington’s side in the entire region for all the right reasons. Through its Quds Force (which General Soleimani lead until his assassination), Iran supported countries and entities around the region who also shared the goal of removing US military, political, and financial control.

That’s why Washington and virtually all US officials, journalists, and pundits call Soleimani a terrorist leader and “evil man:” He was leading the fight against American capital and interests in the entire Middle East region. Randi Nord - "9 Things Americans Need To Know About General Qasem Suleimani's And The US Occupation Of Iraq"

(9) The "There must be a response for the deaths of American soldiers" argument does not hold water in this case. While many Americans are outraged at the fact that thousands of American service members have been killed in Iraq, no one in their right mind can place the blame for those deaths on the Iraqi patriots or the forces they sought help from in defending their country and avenging the deaths of their families. Spending more money, time, and blood in Iraq to "avenge" or justify the lives already lost is an excercize in insanity. It didn't work in Vietnam and it will not work in Iraq. If Americans want revenge for the deaths of our soldiers, we should all look to Dick Cheney, George Bush, Donald Rumsfeld, Barack Obama, and Hillary Clinton as the culprits, just to name a few.

Brandon Turbeville writes for TheOrganicPrepper.com and his own website, BrandonTurbeville.com He is the author of ten books, Codex Alimentarius — The End of Health Freedom, 7 Real Conspiracies, Five Sense Solutions and Dispatches From a Dissident, volume 1 and volume 2, The Road to Damascus: The Anglo-American Assault on Syria, The Difference It Makes: 36 Reasons Why Hillary Clinton Should Never Be President, and Resisting The Empire: The Plan To Destroy Syria And How The Future Of The World Depends On The Outcome. His books can be found in the bookstore at BrandonTurbeville.com and on Amazon.

Turbeville has published over 1500 articles on a wide variety of subjects including health, economics, government corruption, civil liberties and, most notably, geopolitics and the Syrian crisis. His most recent release is a book of poetry, “Dance, Amputee.”
Posted by Admin at 7:31 AM