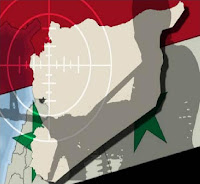 Only days after the brutal public execution of a 15-year-old boy by Syrian death squads, the association of killers known as “rebels” have committed yet another atrocity, this time in the village of Hatla in Deir Ezzor Governorate.

According to reports by The News broadcast on the Syrian Official TV Channel on June 13, 2013, Jabhat al-Nusra, one of many groups of the foreign-backed death squads that have terrorized Syria for the last two years, have now gunned down 30 villagers. The motivation behind the killings, as is typical of the death squads, is currently unclear.

However, it is known (according to The News) that the terrorists first attempted forced relocation by demanding that the residents leave the village. Those villagers that remained were killed and their houses were burned.

The News reports the incident by saying,


A terrible massacre has been committed against the people of Hatla village in Deir Ezzor by the terrorists who use religion as a cover adding a new black chapter to their criminal record.

A few hours after killing a 15 year old boy [Muhammed al-Qatta], Jabhat al-Nusra perpetrated a new massacre in Hatla village in Deir Ezzor Governorate. They compelled the inhabitants to leave and killed those who remained and burned their houses.

The News then broadcast video clips of death squad auxiliaries in Kuwait, giving speeches and celebrating the Hatla massacre. An unidentified man is shown speaking to a crowd in front of Kuwaiti police expressing support and jubilation at the news of the murder of the 30 Hatla residents.

Yet The Independent reports go even further suggesting that the number of civilians killed in Hatla is double that which was reported by The News. The Independent states,

Up to sixty Shia Muslims have been killed in an attack by opposition fighters in the eastern Syrian town of Hatla. A video posted online on Tuesday, entitled “The storming and cleansing of Hatla”, showed fighters waving the black Salafi flag and celebrating.

“We have raised the banner ‘There is no God but God’ above the houses of the apostate rejectionists, the Shia,” the voice of the cameraman says.

Activists denied that the killings were sectarian in nature, claiming instead that they were a response to an attack on a Free Syrian Army checkpoint by 30 armed villagers from Hatla. The activists claim the opposition fighters were incited by the Assad regime’s decision to arm the population of Hatla, one of the only Shia villages in an area that has been firmly under rebel control for more than a year.

However, the language used in the videos is explicitly sectarian. “This is the Shia, this is the Shia carcass, this is their end,” the cameraman says as a blanket is lifted from one of the victims. That video, posted by a pro-Assad group, indicates those responsible were non-Syrians, possibly from Kuwait.

A Syrian government official spoke of a “massacre against villagers in which older people and children were killed”. (Source)

One should pay special notice to the language used by The Independent to denote the guilty parties commonly known as “rebels” by using innocuous terms such as “opposition” and “activists.” In reality, these individuals are nothing more than cold-blooded killers, religious fanatics, and heartless mercenaries.

Syrian death squads, although presented as “freedom fighters” and peaceful protesters by the Western media have a horrific track record of atrocities against both Syrian soldiers and Syrian civilians. For instance, one need only consult the available videos showing the death squads machine gunning captives, beheading prisoners (see here and here), and forcing young children to behead them. I, myself, have written an article dealing with reports regarding the death squad’s hanging of a young child after murdering his family in front of him. One can also view the videos of the death squad members beating and humiliating the famous elderly “Yellow Man” in Aleppo.

Indeed, the videos of the torture of prisoners in the hands of the death squads are legion. One need only type the relevant keywords into a YouTube search engine to be greeted with generous results.
Likewise, a number of chemical attacks directed against innocent civilians on the part of the Syrian death squads have taken place over recent months.

Although the mainstream media and Western governments have attempted to blame these attacks (and every other atrocity) on the Assad government, each and every one has, in fact, turned out to be the work of the Syrian death squads, who are themselves funded by Western governments, intelligence agencies, and NATO command structures.

The massacre in Hatla village is only one more instance of atrocities committed by the foreign-backed death squads on what is now an almost daily basis.
Read other articles by Brandon Turbeville here.

Brandon Turbeville is an author out of Florence, South Carolina. He has a Bachelor's Degree from Francis Marion University and is the author of three books, Codex Alimentarius -- The End of Health Freedom, 7 Real Conspiracies, and Five Sense Solutions and Dispatches From a Dissident. Turbeville has published over 200 articles dealing on a wide variety of subjects including health, economics, government corruption, and civil liberties. Brandon Turbeville's podcast Truth on The Tracks can be found every Monday night 9 pm EST at UCYTV.  He is available for radio and TV interviews. Please contact activistpost (at) gmail.com.
Posted by Admin at 10:49 AM