Secret "Occult Economy" Coming Out of the Shadows?


During December 2011 and January 2012, I wrote two articles dealing with the announcement of two different lawsuits being filed in U.S. District Courts regarding astronomical amounts of money in the forms of U.S. Bonds, Federal Reserve Notes, foreign government-issued bonds, and other financial instruments.
The first article, entitled, “Unprecedented Lawsuit Reveals Bizarre Worldwide Banking Connections,” deals with a lawsuit filed by Neil Keenan, an acting representative of the Dragon Family of Asia, that contains a list of plaintiffs including individuals, governments, private institutions, and secret societies that spans the entire globe. Keenan is alleging that a trillion dollars worth of Federal Reserve Notes, Kennedy Bonds, and Japanese Government Bonds were stolen from himself and the Dragon Family by a worldwide cartel network.
The second article, entitled, “Massive New Lawsuit Filed Against U.S. Federal Government in Bond Theft Scheme,” deals with a similar situation. In this lawsuit, plaintiff Joseph Riad alleges that $15 billion worth of Federal Reserve bonds were stolen from him by similar criminal cartel network involving many agencies of the U.S. Federal Government such as the Department of Homeland Security and the Bureau of Public Debt.
In the latter incident, the bonds are supposedly dated back to 1934. However, the facts surrounding both of these lawsuits are quite difficult to decipher. With such an interconnected web of players including very secretive persons and institutions, as well as historical questions and connotations, it will likely be some time before the convoluted inter-workings of these incidents are unraveled -- if indeed they ever are. 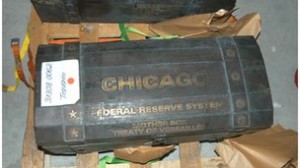 Add to this the seizure of $6 trillion worth of U.S. Treasury bonds by Italian prosecutors and one might begin to see a trend developing. In this instance, according to the Italian prosecutors, the bonds had been hidden in makeshift compartments in three different safety deposit boxes in Zurich. The investigation, dubbed “Operation Vulcanica,” resulted in the arrest of eight individuals who were allegedly planning to buy plutonium from Nigerian sources. Interestingly enough, the bonds were sealed in crates labeled as property of the Chicago Federal Reserve System – Treaty of Versailles Mother Boxes to be exact.  In this case, as in the case of the Joseph Riad lawsuit, the bonds were dated back to 1934.
Although the bonds are alleged to have been fake, at this time we cannot confirm that this is really the case.
The claim that these bonds are fake, of course, might very well be true. However, there is also a great deal of evidence to the contrary.
As I have mentioned in a previous article, the sheer number of U.S. bonds involved is so large that it presents one argument against the theory of a rogue counterfeiter. U.S. bonds are intentionally made incredibly difficult to forge and, considering the technology required to do so, the odds of such technology residing in the possession of a rogue network of underground counterfeiters is highly unlikely. If the bonds had indeed been faked, then it would be much more reasonable to assume that the counterfeiting operation was undertaken by a State – the only type of institution that would have had the infrastructure to oversee such a massive operation.
That being the case, the question would then become “Who?” and, necessarily, “Why?”


Chiang Kai-Shek supposedly sent 125,000 metric tons of gold to the US in 1938. This is obviously much higher than the publicly-reported 203.43 metric tons that had been taken in from various countries between 1929 and 1934.


However, let's not forget that we now have documented proof that secret gold shipments were conducted from China to the US in 1938.


Japan intercepted 2.488 metric tons of gold, bound for the Federal Reserve, on October 24, 1938. It is very likely that many other shipments occurred and were not intercepted -- just as we have been told -- and Federal Reserve bonds were issued.


Special attention should be paid to the last statement because the reports that Wilcock produces are only from The New York Times and most do not mention U.S. receipt of gold as anything other than a footnote. If we were able to examine all of the leading newspapers during this time period, or even a more detailed search of The New York Times itself, there might turn up even more reports of gold shipments. Not only that, but we certainly can’t count out the fact that many of these shipments might have been kept secret from the very beginning. If this is the case, it would stand to reason that there would be no reports published about them.
Regardless, Wilcock claims that these bonds were used to create what he calls the “Occult economy,” where loans are made based on the value of the secret gold stockpiles and transactions between private individuals and central banks are made in secret.
Not only that, but because “operational loss” of bonds/notes was to be expected there would necessarily have been more of the bonds/notes created than the exact number needed by the Chinese.
Furthermore, as Professor Aldrich states, “Regional banks receiving FRNs [Federal Reserve Notes] in return for their gold were aware that the FRNs were likely to be redeemable for only a proportion of their face value. Therefore a much larger value in FRNs would have been required than the total value of the gold that the Americans and Chinese nationalists were trying to extract from China.”
Some might even argue that printing so many bonds essentially under the table would be done with very little concern since the CIA, with its high level of intelligence, would have foreseen that Kai-Shek would soon be in no position to cash the bonds in any event. In short, the money changers could have provided the Chinese with the bonds with no intention of ever honoring them. Likewise, there would be no concern of ever finding themselves in the position of having to do so.
But for all the questions surrounding the bonds, Federal Reserve Notes and other financial instruments seized or mentioned in the various lawsuits recently filed, there are documented instances of fake bonds surfacing in cases very similar to those mentioned at the start of this article.
For instance, in 2003,* two men – a Canadian and a Korean living in Japan – tried to use $25 million worth of US Treasury bonds in order to secure a line of credit from the Imperial Bank of Commerce. The bonds presented by the men were easily spotted as fake and the men, along with Graham Halksworth – a 69-year-old British man and his associate, Michael Slamaj, a former Yugoslav spy -- were arrested and charged.
The story behind the acquirement of the bonds provided by Halksworth and Slamaj directly coincided with the chronology of events as recorded in the files of the Foreign Office.
Yet, although the bonds/notes in the Halksworth case were demonstrably false, they did reveal some rather startling information – that fake bonds were often included amongst large quantities of real bonds so as to preclude the holder from ever being able to cash them.
Indeed, when questioned by the police as to his role in the fake bond scandal, Halksworth responded by telling police that “Deliberate mistakes were often made in such bonds as a security device; ask the CIA.” When the police pointed out that the mistakes were so obvious it looked like a child had made them, Halksworth responded, “Exactly.”
Halksworth might be in some position to speak on the matter considering his background. He was a forensic specialist and a member of the Forensic Science Society who helped develop a fingerprinting system for Scotland Yard in 1967. He also worked for a company that provided forensic equipment for many foreign governments as well as authenticated historical documents for the Chinese and German governments. He helped issue bonds from both commercial banks and the Bank of England. He also authenticated and approved U.S. Federal Reserve bonds for churches, Saudi princes, and Native American tribes. With a career history such as this, Halksworth is likely to know whereof he speaks.
In addition, David Wilcock claims that he has inside information that Halksworth’s assertions are indeed true. That is, at least his assertions about deliberate mistakes being added to real bonds and other financial instruments of a high value and secretive nature. Wilcock claims that his insider explained to him that for every box of real bonds created, four boxes of fake bonds are created along with it. According to Wilcock, the source also claims that even the real boxes contain up to 20 percent fake bonds.
This is designed, Wilcock suggests, in order to prevent the bonds from ever being cashed and endangering either the “Occult economy” or the real economy that is now made up of derivatives and private central banks. If anyone ever comes into possession of these bonds, they will be “caught” with the forgeries, arrested, their bonds will be seized, and the Secret Service or other relevant agency will escape with the real financial instruments.
Unfortunately, at this point, it is still impossible to make a final judgment about the Riad/Keenan lawsuits, seized bonds, or even many of the claims made by David Wilcock. However, by taking a look at each of these cases while keeping in mind the big picture, it is possible that some light may be shed on the shadowy edges of international finance and worldwide banking cartels.
Throughout this saga, if the information we have received so far can be believed, we are approaching great revelation into the tunneled spider web of the global control system that, up until this point, has remained well hidden.


*NOTE: The original article from the UK Independent has apparently been scrubbed from the Internet. It is, however, preserved in the archives on Rense.com.
Posted by Admin at 6:31 AM